The Samsung Galaxy S8 and S8 plus are two of the most attractive smartphones that have come out in the past few years. With their super-slim bezels, rounded corners, and glass backs that come in a variety of colors, the S8 and S8+'s good looks can't be denied. Most of the accessories that debuted alongside the duo, such as the Alcantara Cover and Clear View Standing Cover, aren't bad-looking either. However, there's one exception to the rule - the 2Piece Cover. If you want to make your gorgeous new phone look like absolute crap, you should seriously consider one of these. 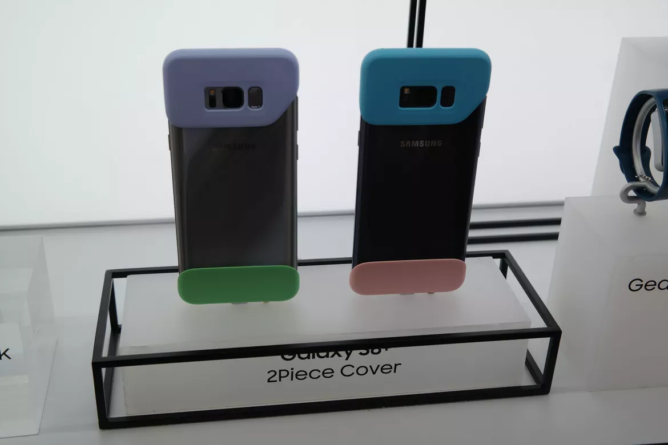 Words cannot describe the absolute derision I feel for this... thing. It kinda reminds me of HTC's Double Dip case with the top and bottom pieces that you can mix and match, but it's a lot worse in both functionality and aesthetics. Not only do you not get protection for the sides and glass back of your phone, but you also risk a piece (or both) flying off when you inevitably drop it. Samsung says that it was internally known as the "bikini case" because of its two-piece nature; I say that it should have been known as the "should-never-leave-the-drawing-board case" because it's an eyesore, and it sucks as a case.

The 2Piece will reportedly cost around $20; I could only find one source to corroborate this, but it seems in line with what Samsung would charge for it. Don't waste your money on it, though; take that Jackson, buy a nice Spigen case, and have some money left over. And if you must go OEM, pony up a few extra bucks for the Alcantara Cover or the Silicone Cover.

Be warned: if I see any of you walking around with this monstrosity on your shiny new S8, I will slap the phone out of your hand. Bet you'll wish you'd bought literally any other case when you pick your shattered and dented phone off the sidewalk.

Not one to let a franchise sit on its laurels, Ubisoft is bringing its Tom Clancy series to Android

The Galaxy S8 is the first phone with Bluetooth 5, can stream audio to two Bluetooth devices at once