When Google renamed Brillo to "Android Things" at the end of the last year, it also announced new partners for Google Home. Beside Hue and SmartThings, there would be Belkin WeMo, Honeywell, Wink, LiFX, and TP-Link. The first two are already live in the Home Control section of Google Home's Assistant settings, and the third should be available starting today.

Wink makes a home hub that works as a central control place and bridge between all of your connected gadgets. The Hub 2, which I reviewed a few months ago, has WiFi, Bluetooth, Z-Wave, Zigbee, and plenty of other protocols to communicate with many smart home products. As I discovered, it's also very easy to set up and one of the simplest ways to start building your connected smart home without feeling overwhelmed. As long as the product you choose is supported by Wink, there will be clear requirements, tutorials, and graphics for you. Plus, previously, you could trigger Wink Shortcuts with OK Google (before Assistant was announced), but that hasn't been working for months.

However, starting today, you should be able to control some Wink products from Google Home and Assistant. To add Wink to your list of controllable devices, you can head over to Home Control in your Google Home app, tap the + button, select Wink, log in with your username and password, and you're set. All your lights and thermostats will be listed and you can group them together if needed. Use commands like "turn bedroom light on," "set living room light to 50%," "turn up the temperature by 5 degrees," or "set living room thermostat to 70 degrees," to control your gadgets. 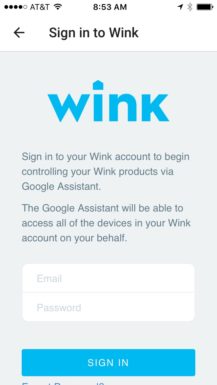 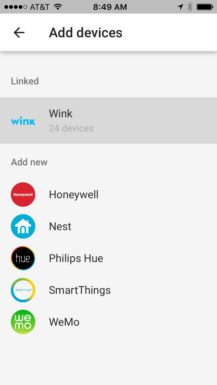 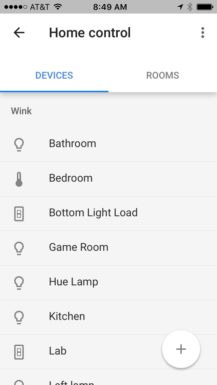 Screenshots from the Home app on iOS. Everything should be the same on Android.

Like Wink's Amazon Alexa integration, this only works for thermostats and lighting products (switches, bulbs, plugs, dimmers), so it looks like you won't be able to lock your door or raise your blinds with voice commands just yet. You can still do a lot though if you use smart plugs for some of your electronics and appliances, like starting the coffee machine or turning off the crockpot.

I'm very excited about this option finally being live: my Google Home should be here soon and I can't wait to try all these commands. In the meantime, I've checked the Google Assistant settings and Wink doesn't show up yet for me under the list of products I can add, but it could be a server-side switch or a slow rollout.

One thing worth noting about Wink: the app doesn't require a Wink Hub to function and some third-party gadgets don't require it either. For example, I was able to create an account, add my Canary camera (see: no Wink Hub under requirements), and switch security modes from the Wink app months before I got the Hub 2. That's to say that maybe, you could add some thermostats to the Wink app and control them from your Google Home without requiring a Hub. I stress on maybe, because I don't have any product to test it with.

I'm sure it wouldn't work with Z-Wave lights and switches, because that requires the hub to issue the commands, but cloud-controlled gadgets should technically be within limits. In this case, I'd say the Ecobee3 and Carrier Côr and Emerson Sensi thermostats, and the iHome Smart Plug could work with Google Home without the Wink Hub, provided you create a Wink account and add them there first. It's worth trying if you have one of these, because this might be one of the only ways you can have native control over them from Google Home without relying on IFTTT.

HTC will reveal its Snapdragon 835 flagship, the U, in April according to report