Translate has gone through a couple of changes with a new update rolling out today. A look through the app turned up an enhancement to the standard word translation screen that now includes definitions, example phrases, and synonyms. The navigation drawer has also been updated to include an account switcher, not to mention a slight tweak to the visuals. If you're eager to get your hands on the new version, hit the download link at the end of the post.

Official changelog has been posted

The official changelog has been posted on the Play Store page:

This obviously clarifies that the dictionary definitions are language specific, but the list will probably grow substantially in the future. It seems the camera's instant translation feature can now work between English and Korean, which evidently wasn't supported in the past. 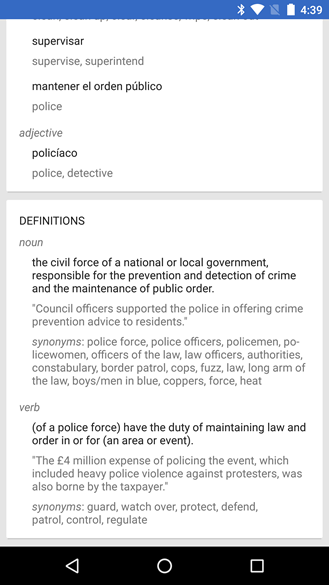 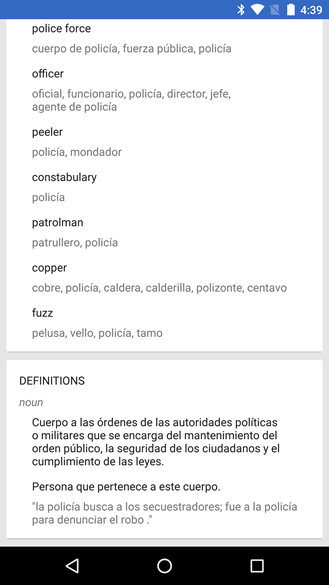 Languages are confusing, complicated, and sometimes pretty inconsistent. Many people don't even have a foolproof grasp on their own language. The latest update to the Translate app adds a possibly handy feature: Dictionary definitions for translated words.

At the bottom of the word/phrase translation page, following the section of alternate translations, you might find a new block dedicated to definitions. It actually includes a bit more than just definitions, there are also sample phrases and synonyms in the same place, which could be very useful if the translations you're trying to get are not quite right. If I were to make one suggestion, it would be to turn the synonyms into clickable links that automatically open a new translation. Just a thought. 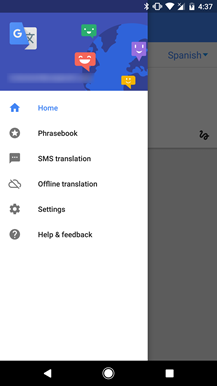 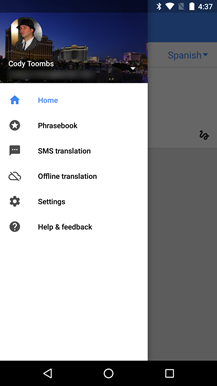 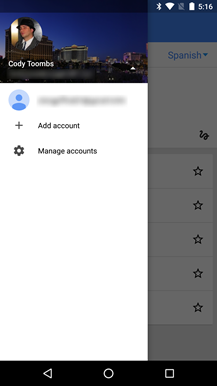 Worth quickly mentioning, the nav drawer has been updated to resemble that of many other apps in Google's family. That is to say, it now sports an account switcher and features your profile image and backdrop. There's not really too much to say about this except that it's certainly more convenient to change accounts right in the nav drawer than it is to go to the Data Usage screen in Settings. Yes, that's really where it was before.

If you're looking particularly close, you may also notice the icons and text are now also a bit darker.

Setting was removed for Sync Phrasebook 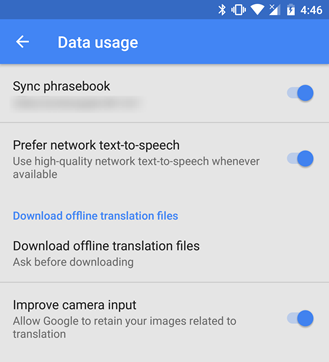 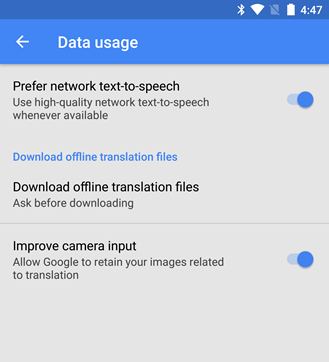 This one is pretty obviously linked to the addition of the account switcher. If you should happen to look in the Data Usage screen in Settings, you'll find that the Sync Phrasebook option has been removed. While I doubt anybody cares much about syncing phrasebooks, you no longer have much of a choice - Translate assumes you want your phrasebook synced on whichever account is active. When you switch accounts at the nav drawer, your phrasebook also switches with it.

In the event you needed to switch accounts in previous versions, you would have to tap on the toggle once to turn off syncing, then tap it again to reactive it, which then triggered a dialog to pick your account. Needless to say, the new, more accessible account switcher is better, even if this isn't something most of us are going to do very often.