In late June of last year, Amazon introduced its Prime Exclusive program, which offered unlocked phones to Prime members at a discount in exchange for a few Amazon apps and ads on them. It was a rather intriguing concept, and it's proven to be a success. David even used a BLU R1 HD in $60 Prime Exclusive guise for a month to see how a smartphone that cheap would fare. Now, Amazon is releasing another $60 Prime Exclusive phone in the form of the Alcatel A30, as well as the not-$60 Moto G5 Plus. 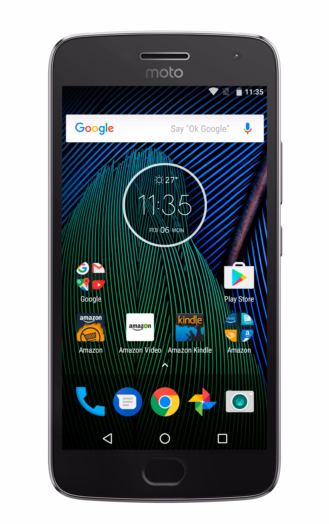 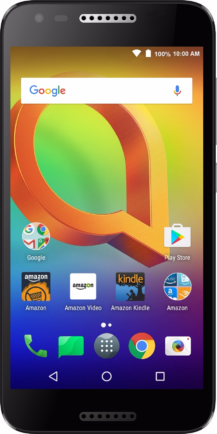 As you might expect from its $59.99 price tag ($99.99 for the standard version), the Alcatel A30 is decidedly lower-end than the G5 Plus. It features a 5.0-inch 720p display, a Snapdragon 210, 2GB of RAM, 16GB of storage and a microSD slot, an 8MP/5MP camera combo, and a 2460mAh battery. It, too, has Android 7.0 Nougat. A two-year Alcatel device protection warranty is mentioned as well. Interestingly, there's a separate "CDMA - VERIZON" model, which means that only Sprint users are left out here in the States.

Both phones are already up for pre-order on Amazon. The G5 Plus will be released on March 31st, while the A30 will be out on April 19th.

Alcatel debuts its first device with Prime Exclusive Phones, the Alcatel A30—only $59.99 for Prime members and featuring Android Nougat, a 5” HD display, a quad-core processor, 4G LTE speed, compatibility with Verizon and major GSM carriers, and Alcatel’s two-year device protection warranty
Motorola brings its third device to Prime Exclusive Phones, the Moto G5 Plus, which features a 5.2” Full HD display, fingerprint reader, an octa-core processor, 4G LTE speed, and compatibility with all major U.S. carriers—two variants are available, one with 2 GB of RAM and 32 GB of internal storage for only $184.99 for Prime members, or 4 GB of RAM with 64 GB of internal storage for only $239.99 for Prime members
Incredible pricing is supported by personalized offers and ads, including deals and product recommendations, displayed on the phone’s lock screen
Unlocked smartphones give customers the freedom and flexibility to choose the wireless carrier and service that best fit their needs
SEATTLE--(BUSINESS WIRE)--(NASDAQ: AMZN)—Amazon today announced two new devices joining the roster of Prime Exclusive Phones. Alcatel, a top five mobile smartphone manufacturer in North America, is bringing its first device to the program—the Alcatel A30 for only $59.99 for Prime members, $40 off the full retail price. Motorola’s recently announced Moto G5 Plus will be offered starting at $184.99 for Prime members—that’s at least $45 off the full retail price. These Prime Exclusive Phones are available for pre-order starting today at www.amazon.com/prime-exclusive-phones.

In 2016, Amazon launched Prime Exclusive Phones with BLU and Motorola, offering Prime members incredible discounts on fully featured unlocked Android smartphones. The discounted pricing is supported by personalized offers and ads, including deals and product recommendations, displayed on the phone’s lock screen. The Prime Exclusive BLU R1 HD and Moto G4 remain the #1 and #2 best-selling unlocked phones on Amazon.com since they launched.

“Prime Exclusive Phones consistently rank in our best-sellers list, and are some of the most highly rated unlocked phones available on Amazon—the program has exceeded expectations,” said Laura Orvidas, Vice President, Consumer Electronics, Amazon.com. “Our goal is to give Prime members a wide variety of offers on unlocked phones at affordable prices, so we are thrilled to welcome a new manufacturer, Alcatel, to the program. As we continue to expand Prime Exclusive Phones with the launch of the Alcatel A30 and the Moto G5 Plus, Prime members now have more options to choose from, with a range of prices starting at $49.99.”

“The Alcatel A30 is another example of our commitment to offering best in class smartphone value to our customers,” said Steve Cistulli, President and General Manager for TCL Communication North America. “Adding this device to Amazon’s Prime Exclusive Phones program is an exciting evolution of our relationship and ensures that even more consumers have access to our feature-rich and value-packed smartphones.”

The new Alcatel A30 has a metallic silver frame with a textured back, Android 7.0 Nougat with Google Mobile Services, including Google Maps, Gmail, YouTube, and Google Play. It features a sharp, 5” 720p HD display, directional audio with front-facing speakers, Qualcomm Snapdragon quad-core processor, and 4G LTE speeds. Customers can use the 8 MP rear-facing camera and 5 MP front-facing camera with a variety of camera modes for complete creative control of photos and videos. The Alcatel A30 is simple to use, including gesture controls like tap to wake and flip to mute, features impressive all-day performance, and is available with 2 GB of RAM and 16 GB of internal storage, plus microSD card support for up to 32 GB of additional storage. Like other Alcatel phones, the Alcatel A30 is backed with a two-year device protection warranty.

The Prime Exclusive Phone single sign-on experience provides Prime members easy access to their Prime benefits through the most popular Amazon apps, including thousands of movies and TV episodes with Prime Video, over two million songs and playlists with Prime Music, photo storage and backup with Prime Photos, unlimited reading with Prime Reading, free two-day shipping on millions of items, and more. Customers also get access to thousands of apps, games and in-app items that are 100% free with Amazon Underground, and can shop a personalized selection of Amazon’s daily deals right from a new home screen widget.

The Alcatel A30 and the Moto G5 Plus can be pre-ordered starting today. Visit www.amazon.com/prime-exclusive-phones for additional information and details about the Prime exclusive offers. Both devices without offers and ads are also available on Amazon to Prime and non-Prime members, at full retail price.

Tens of millions of Prime members around the world enjoy the many benefits of Prime. In the U.S. that includes unlimited access to award-winning movies and TV episodes with Prime Video; unlimited access to Prime Music, Audible Channels for Prime, Prime Reading, Prime Photos, Twitch Prime; early access to select Lightning Deals, one free pre-released book a month with Kindle First, and more. Prime was built on the foundation of unlimited fast, free shipping and today, members receive unlimited Free Two-Day Shipping on more than 50 million items, Prime FREE One-Day Shipping and Prime FREE Same-Day Delivery in more than 5,000 cities and towns, and two-hour delivery with Prime Now in more than 30 major cities. Start a free trial of Amazon Prime at amazon.com/prime.

Android O feature spotlight: Multi-window apps now stay on the screen when you go to your ...