In continuing with the cavalcade of smartwatch announcements, Michael Kors has unveiled two new Android Wear offerings in its Access line. Both the Grayson and Sofie are the next step in the luxury brand's attempts at blending design, personal style, and technology. 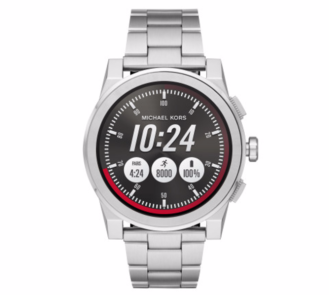 The Grayson looks more like a traditional men's watch and is marketed as such. According to Michael Kors, it is meant to "complement the 24/7 lifestyle of the modern man." Honestly, I can't say that I'd want to wear this watch to the gym or hiking, but that's just me. You can expect an AMOLED display and a digital crown, though no word is given about NFC or LTE. There will be three color options to choose from: gold, stainless steel, and a blue and black ion-plate (that sounds interesting). Four interchangeable strap options are also included. 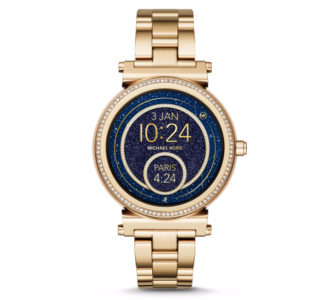 The other Android Wear announcement was the Sofie, which is Michael Kors' smartwatch for women. It features a thinner case and lighter feel with "a pavé bezel" and a fully round display. Unlike the Grayson, there is no mention of a digital crown, but you still get the AMOLED display. As far as smartwatches go, this is definitely more on the feminine side, though those lugs look rather large in comparison to the piece as a whole. The Sofie will have eight plating/bracelet combinations and seven interchangeable strap options.

Michael Kors also announced some new hybrid watches and activity trackers, as well as more target markets for its lineup. The MK Access app is also receiving a refresh, with its most notable new feature being "My Social." This lets a user link his or her Instagram account, scroll through the feed, and select an image (and apply filters) which will be the new watchface. Alrighty, then.

You can check out the press release below, if you feel so inclined.

LONDON--(BUSINESS WIRE)--Michael Kors (NYSE:KORS), a global luxury fashion brand, is pleased to announce a host of new products and initiatives designed to further the growth and excitement generated by last fall’s launch of MICHAEL KORS ACCESS, the brand’s line of smartwatches and activity trackers.

“It’s clear to me that the future of fashion will combine great design, personal style and innovative technology,” says Michael Kors, “and the amazing response to MICHAEL KORS ACCESS has confirmed that that future is now. We’re thrilled to be able to offer this next generation of smartwatches and hybrids.”

“MICHAEL KORS ACCESS display smartwatches have been extremely popular choices for users who wish to wear watches that are both stylish and functional,” says David Singleton, Vice President of Android Engineering, Google. “We’re very excited to continue the partnership with Michael Kors to create beautiful new devices that let people express their style while staying connected through the latest features of Android Wear 2.0.”

“When we launched, we stated that we would grow our wearable technology line by listening closely to our customers,” says John Idol, Chairman and CEO of Michael Kors. “They have made it clear that they love being connected, love the ease of notifications from their favorite apps, and can never get enough customization. We’re pleased to be introducing exceptional new smartwatches and software that deliver on those fronts and others, and in more markets than ever.”