Last week, I had the privilege of visiting Qualcomm's San Diego campus to check out the new Snapdragon 835 chip and run some benchmarks using Qualcomm's reference platform for the SoC. You'll never guess what happened next (you will: benchmarks).

Full disclosure: Qualcomm paid for me to ride the train to San Diego, which was very pretty, put me up in a great hotel next to Qualcomm HQ for two nights, and took me out to a very nice dinner... with an open bar. There was a taco station with really, really good Mahi-Mahi. The guacamole was also totally solid. We played cornhole. I lost. Repeatedly.

The Snapdragon 835 is the next major evolution of Qualcomm's system-on-a-chip platform, and it's a one you'll be seeing in a lot of smartphones this and probably next year. You can read about the big changes in our initial announcement post right here, but I'll provide a flyover for those of you wanting the short version.

Basically every major chip on the 835 is a new part, from the X16 LTE modem, to the octa-core Kryo 280 CPU based partly on ARM reference cores, the Adreno 540 GPU, the Hexagon DSP, and more. The new 10nm fabrication process also brings inherent improvements across the board (literally), especially in efficiency, allowing Qualcomm to fit more transistors onto a smaller die than ever before. The Snapdragon 835 is, in fact, the first commercially-available 10nm SoC on earth.

Initially, Qualcomm claimed the 835 would be around 20% faster than the 820, while also capable of being around 25% more power-efficient on the same workload. While the reference hardware we tested on is obviously quite... robust, the results from synthetic benchmarks indicate Qualcomm may have undersold the 835 a bit in some areas, perhaps in case things didn't go as well as they hoped. It's possible that real-world handset performance increases will be more in line with the 20% figure Qualcomm quotes, but with the GPU performance nearly increasing by 40% or more over the 820 in some tests, there's more to it than just CPU here. This is a very fast processor, even if it may not necessarily go toe-to-toe with the best from Apple in some ways (Apple's chips still unabashedly dominate in single-thread CPU performance, for example).

The results from testing, and comparisons to production devices, follow.

I realize the S7 Exynos and P10 I've thrown in here are not ideal because of their OS version in the case of the former and the preproduction status of the latter. Nonetheless, they are valuable points of comparison, and leaving them out would make this post much less helpful. 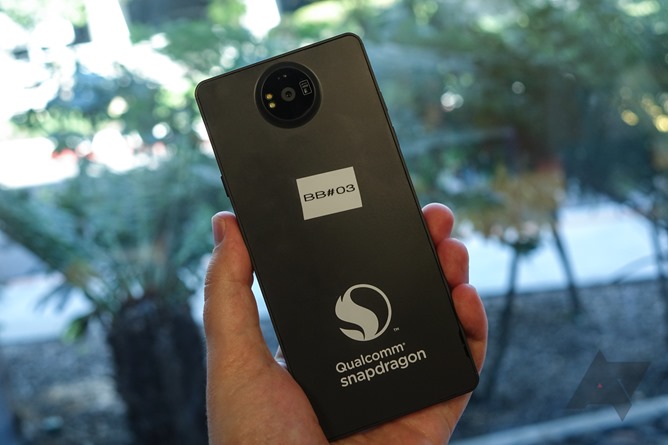 Qualcomm's reference device, pictured here, does not contain any active cooling components (it doesn't have a fan) and, aside from being very thick because of its status as an engineering test platform, runs the same chip Qualcomm will sell to its partners. Qualcomm certainly could tune the device to know to run at peak speed when known benchmarks are detected, but they'd be far from the only company to do this.

This is why benchmarks generally should be taken with a grain of salt. I'm not here to sell you these results: I'm just reporting what I observed, nothing less, nothing more.

If you want to see the raw data for each test, I've placed them in this table (I know, it's not readable, but you can refer back to it after looking at the charts). 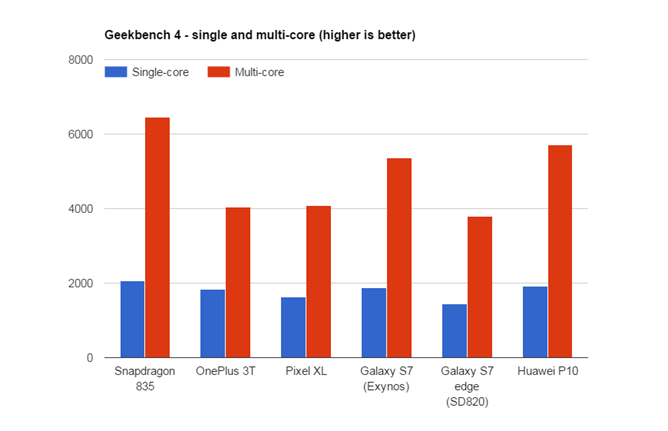 The Snapdragon 835 fares better than all other devices tested, unsurprisingly, but it's in multithreaded performance where it particularly shines, obtaining a nearly 40% higher score in the multicore test versus the Snapdragon 821. While Huawei's P10 is within shouting distance, the 835 still pretty easily glides past it in this area. This is probably what happens when you double the number of CPU cores, to be fair.

Single-core scores have the 835 just marginally faster than the 821, a little over 10% or so. So we're probably not going to see major single-thread performance improvements with the 835. 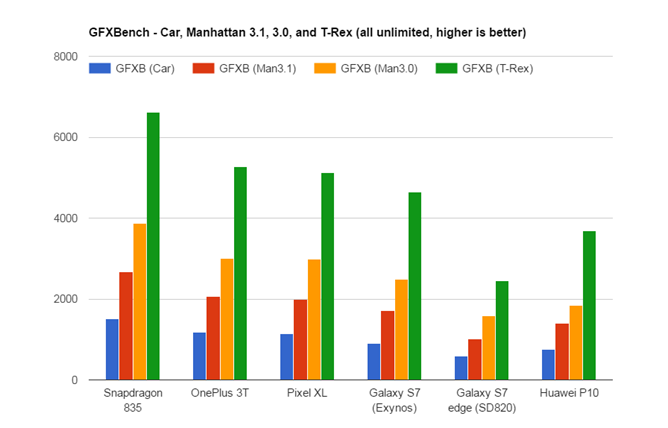 Here we see what is probably the single biggest across-the-board performance boost for Qualcomm's newest chipset, the Adreno 540 GPU. Results from the 835 easily bested the Snapdragon 821 in the most demanding test by around 30%, a lead that translated to pretty much every test in the GFXBench suite. That's impressive. As we can see, Samsung's Exynos and Huawei's Kirin still have a ways to go to catch up with Qualcomm on GPU performance. But Qualcomm seems quite invested in improving Adreno generationally. 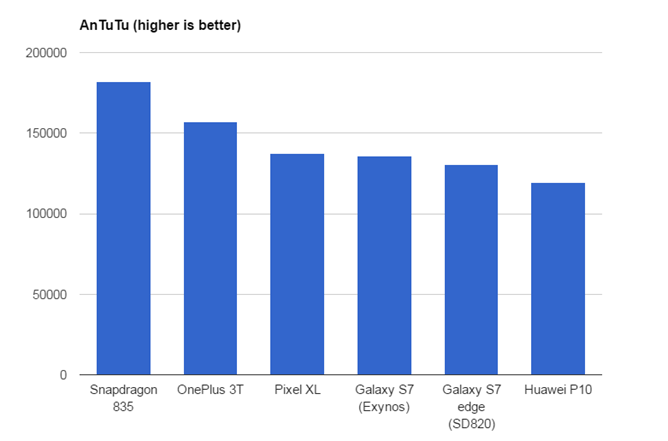 The 835 does well here, clocking in at over 181000, but AnTuTu really is the quintessential "my number is bigger than yours" benchmark, full of manipulated results and arbitrary weighting of the test factors. But hey, if you care - the 835 wins.

3DMark is an immensely popular graphics benchmark utility on desktops, and the mobile version has picked up steam over the years as well. Our first test is the new OpenGL ES3.0/3.1 Slingshot Unlimited, which uses the same resolution to render the test across all devices at the same resolution. 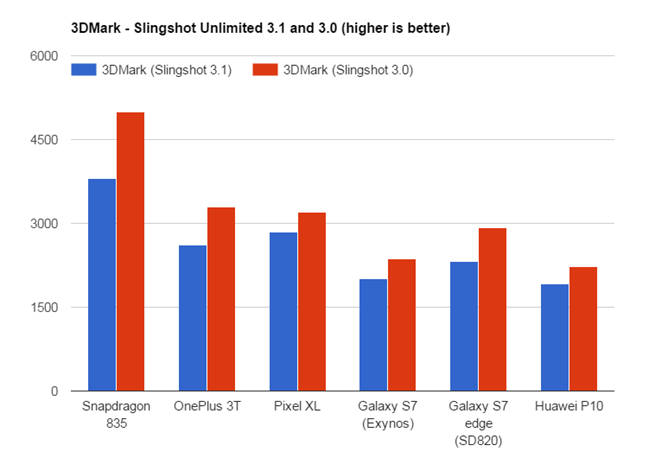 We also ran the more commonly referenced Ice Storm Unlimited, which while not as pronounced in terms of the distance between first and second, still was pretty convincing. 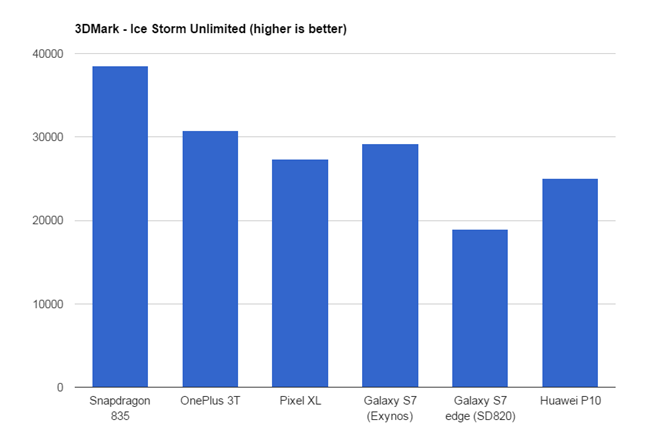 The 835 bested the next-closest phone, the OnePlus 3T, by a little under 30%. This test tends to bring CPU into the mix a fair bit more, so we also see the Exynos version of the Galaxy S7 faring pretty well, better than the Pixel XL.

For a variety of reasons, we did not test version 2.0 of PCMark with the Qualcomm reference platform phone (it was largely unavailable during our testing, though some did manage to get results), so we're using the older version one platform. PCMark is another holistic benchmark that seeks to recreate "normal" device workloads and measure real-world performance, though it's hard to call any strictly standardized and largely synthetic test representative of "reality." Anyway, here's the chart. 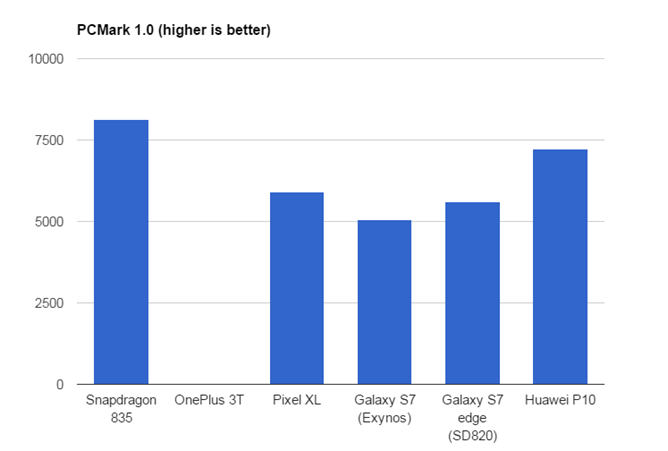 Unfortunately, this older version of PCMark would never successfully complete on the OnePlus 3T. The 835 comes out ahead here by a decent margin, but it's not a blowout - PCMark only awards the 835 a score around 10% higher than the Kirin 960 in the Huawei P10.

Web benchmarks like Google Octane and SunSpider measure Javascript performance. Octane, I've found, can be a pretty reliable indicator of a given platform's browser performance, but I'd hardly call it an end-all-be-all. 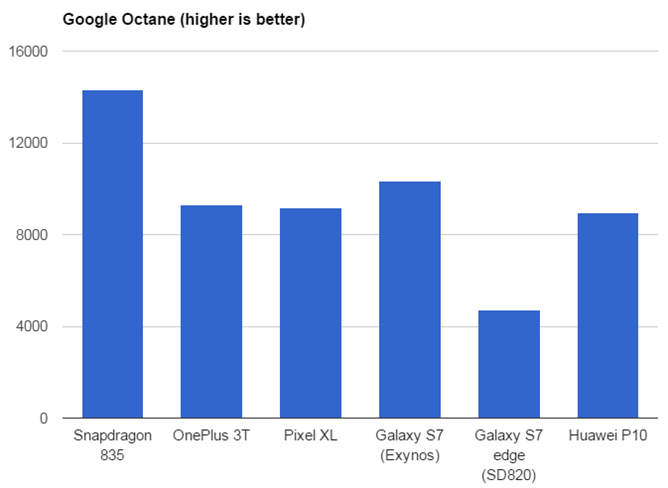 That said, the 835 reference platform demolished anything else. It was a full 40% faster than the next-closest Galaxy S7 Exynos variant, and over 50% faster in the test than either Snapdragon 821 phone I tested. Hopefully this means good things.

Next up are SunSpider and Kraken, which measure how long it takes to complete a series of benchmark tests, so a lower score is better for these two, as opposed to higher for everything else in this post. 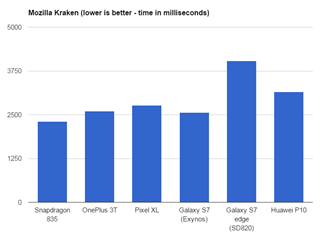 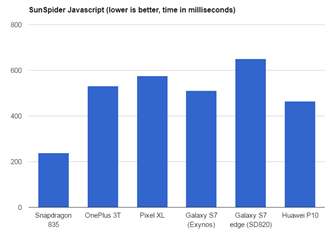 The 835 comes out on top (rather, bottom) in both tests, though it has a surprisingly strong advantage in the SunSpider test. I'm unsure what build of Chrome the reference phone was running (sorry, that's my bad), so I wonder if we could be seeing some kind of anomaly there.

Surprise: newer chip is faster than older chips! Sometimes a lot faster. Sometimes a little. I try not to take benchmarks too seriously, because they are definitively unreal experiences - there's very little they tell us that guarantees a particular user experience when a piece of hardware technology is implemented in a consumer product. Of course, we can draw some basic conclusions: the Snapdragon 835 probably isn't going to set the world on fire with its single-core performance, which seems just marginally better, though the switch from 4 cores last year to 8 this year will almost definitely benefit multithreaded workloads. The shrink to a 10nm process will make the chip more efficient while doing the same work when compared to a Snapdragon 821, as well.

I think the Adreno 540 is also very considerably faster than the GPU in the 820-series Snapdragons, though Qualcomm was completely mum on how those gains were achieved. We don't even know if it has more core clusters - Qualcomm keeps Adreno under a pretty tight lock and key, so we'll have to wait for microscopic and x-ray analysis to really learn anything about that side of things, probably.

All in all, though, I was glad to experience the benchmarking event, and I hope to have a post more about how everything went down for you later this week, as opposed to the cold, dry numbers in this article (which I know many of you want to see, regardless). We also went to Qualcomm's labs to check out things like power consumption, imaging, and virtual reality, so there are things we discussed that I haven't even brought up here. But if you're just in it for the bar graphs and tables, I hope you got something out of this post. This is my first real go at a benchmarking feature, and I realize my graph visuals aren't the best (this week has been insane [see: this little thing], otherwise I'd have given them proper attention for more consistency), so my apologies for that. But I wanted to be sure we got them out there for you. So, anyway, forgive a bit of sloppiness here and there, and thanks again to Qualcomm for having me.