In the world of technology, it's rare that a successor product is actually worse than the one that preceded it.

Today is a rare day.

The Huawei Watch 2 is a step backward - multiple steps, even - from the original, even if it does claw back some of that lost ground with new features. The Huawei Watch 2 adds NFC, GPS, LTE, and Android Wear 2.0 to its repertoire, which all sounds well and good. Alas, it all feels for naught when it comes down to the final product experience. What it takes away is almost everything that made the original the de facto champion of the Android Wear world.

The screen is [much] smaller, having shrunk nearly two tenths of an inch, which is very considerable when we're talking about something the size of a watchface. There's a giant, raised bezel that makes actually using this touchscreen a major frustration, too, harkening back to some of the earlier round Wear devices. Wear 2.0's intense reliance on gestures makes this a considerably greater frustration, though, and there's no rotating crown to fall back on, unlike the new LG Watch Sport and Watch Style.

The Huawei Watch 2 is such a bizarre series of product and design decisions that I'm unsure how the company that built the original could have come up with... this. It's kind of sad.

Please note, this review is based upon the use of a prototype, preproduction device I've had for a few weeks. There may be some differences with production devices, but not ones that are likely to affect features or design in any major way. I've also tried to avoid discussion of what I perceive to be bugs or fit and finish issues, in fairness to Huawei. 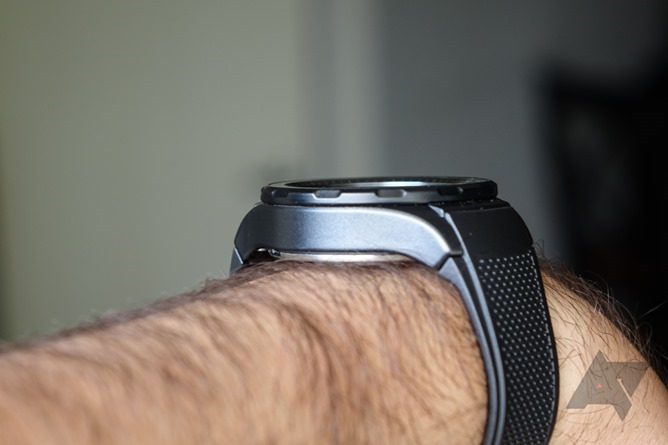 This "sporty" version of the Huawei Watch 2 features a plastic watch body sandwiched between a metallic bezel and stainless steel backplate. The large bezel piece has an equally large ticker font, and a very sporty series of cutouts that line its circumference. The lugs are fairly small, and so the body of the immensely thick Huawei Watch 2 just looks all the more awkward, like a really tall person with tiny feet. The effect is amplified by the 20mm watch bands, a bit narrower than the 22mm bands we see on most watches this size. On the side are two stainless steel buttons, one primary, one customizable, which provide decent feedback. 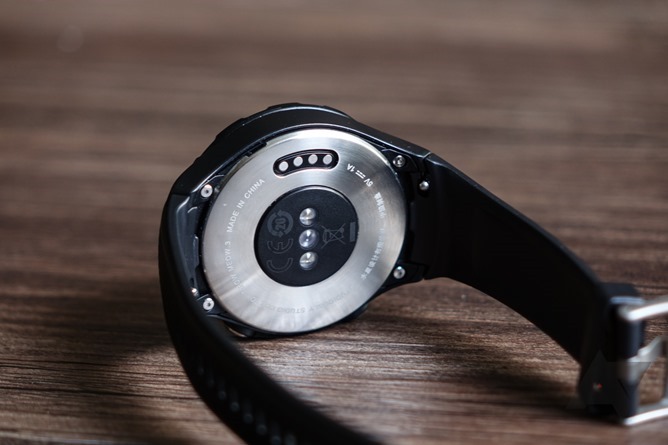 The overall look and feel here, though, is of cheapness. The Huawei Watch 2 looks like a generic men's sports chronograph, and it feels like a pretty bargain-bin one, what with the plastic and all. The included silicone band also feels cheap, though it is at least easy to remove for washing. I wouldn't say it's really all that useful for replacement, though, because like many men's sport watches, the straps have been designed to fit precisely into the body of the watch in a way that looks "flush." That means aftermarket 20mm bands will either have to be designed specifically for the Huawei Watch 2 to look "right" or, more likely, your Huawei Watch 2 will just look kind of weird when using anything but the included bands, so you won't even want to swap them out. (Not to mention the SIM tray would be visible, as below.) 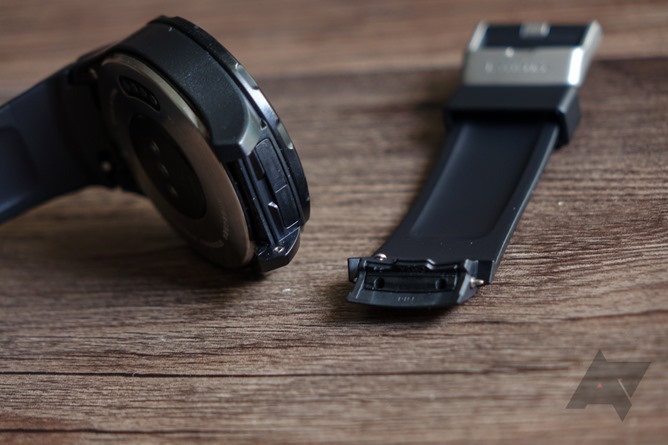 The beauty of the original Huawei Watch was that it could be used with almost any kind of band and pull it off. It wasn't lugless, but it was clearly designed to be used with a variety of straps and still look good (I was a fan of the don't-call-it-a-Milanese-loop mesh). This new one will probably look pretty awkward with anything but the stock band because of the way the watch was designed to have the bands fit flush into the body, not to mention the actual look of the watch really would clash with anything but black or gray. 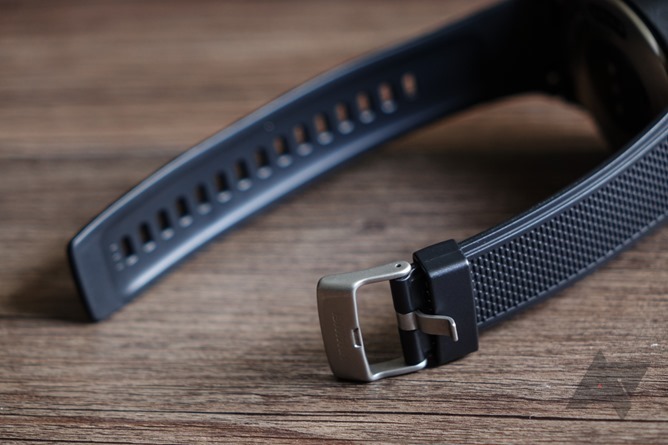 The unsightly bezel, though, is what really seals the deal for me on the Huawei Watch 2 visually. It is so unashamedly in your face, and not in a good way. Ergonomic issues aside, this watch may appeal to some people, but that's going to be a very limited audience inherently. The Watch 2 "Classic" is a bit better, offering a less fussy bezel design and wider 22mm straps clearly more designed for swapping in and out, but it's still not what I'd call "attractive." And it's still just as comically thick (12.6mm), despite the Classic lacking LTE.

The 1.2" AMOLED display is reasonably bright and does now have an ambient light sensor, meaning brightness is managed automatically. That's definitely an improvement.

The Huawei Watch 2 runs Android Wear 2.0 reasonably well. This is probably the only nice thing I'm going to say in this section.

By reducing the size of the screen to 1.2" and adding a substantial raised bezel over the edge of the display glass, Huawei may have created the most frustrating-to-use Android Wear device in existence. That's even smaller than the LG Watch Urbane's display, about the smallest round smartwatch screen I think I'd realistically want to do deal with. But doesn't the LG Watch Style also have a 1.2" screen? Does it get a pass? 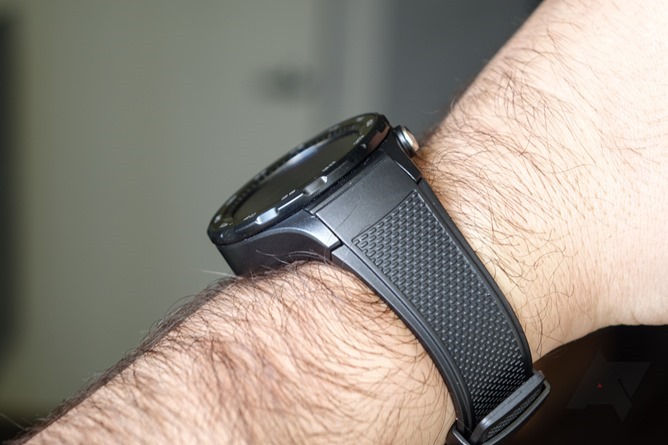 You see, the Watch Style can at least partly get away with this in theory - its display is augmented by a rotating crown that allows you to scroll through all the vertical lists that have been introduced in Android Wear 2.0, and avoid the screen for most other non-tap tasks. There's just no room on the Huawei Watch 2, though, and between all the scrolling and swiping on that tiny canvas, this is not a fun product to use. I'm having an absolutely terrible time trying to use Wear 2.0's new swipe-for-back paradigm with this huge raised bezel. I'll pull the interface nearly all the way to the threshold that initiates the 'back' or 'dismiss' action, only to bounce right back where I was. It happens constantly. It makes me actively dislike using the watch, and it's a problem even a rotating crown wouldn't fix.

In a similar vein, I've had to set a lockscreen to use Android Pay on the watch, which means a PIN or pattern setup. I went with pattern - I get my pattern wrong, I'd say, 60% of the time. Because the screen just doesn't pick up my touches, like I'm triggering some anti-accidental-touch algorithm on the watch. Touch interaction otherwise works, but the lockscreen drives me nuts, and you have to unlock the watch at least once a day (when it comes off the charger), as well as every time you take it off and put it back on. 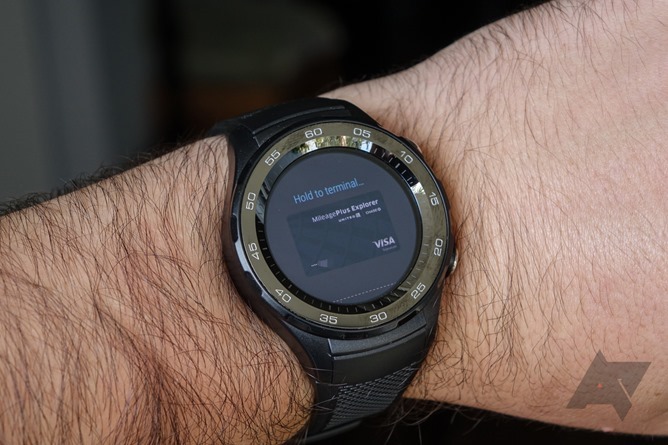 As to Android Pay, it's just not a good experience on Wear, sorry. Alex Dobie at Android Central explains why in depth here (and it's a worthy read), but for me, it's just not at all convenient. I've mapped launching the Pay app to the Watch 2's custom button, but it takes a good 2-4 seconds to pop up on the screen after you do this, then you have to twist your arm around so that the watch face is facing the NFC terminal surface, which always looks bizarre (the coil is in the bezel). Between having to open the app and the physical process, it's way easier to just unlock my Pixel XL - which is probably already in my hand, let's be honest - and slap it down on the terminal than use the watch to pay. No opening an app, no awkward positioning. Android Pay for Wear is a nice idea with a subpar implementation.

Battery life on the Watch 2 has been generally good for me, though I think the software isn't done - I have random bad battery life days for no reason sometimes. I'm not using LTE and have the SIM slot disabled, so if you add a SIM in, your battery life will probably get a lot worse. As is, I can easily do a day and a half with the Watch 2, but that extra half day doesn't really tend to be useful, since it still means you'll want to charge every day if you want to use it every day. I guess it's good to know it's unlikely it'll die in a single day, though I never really tried any activities with the GPS enabled, which I imagine would eat into the battery pretty quickly.

The customizable button is what you'd expect - you can map it to launch apps or do some basic activities with Huawei's fitness app (which I disabled, as it seemed to be double-counting my steps). The heart rate sensor works, but slowly and unreliably in my experience, so maybe that's just a preproduction hardware issue.

I'm not going to get into my larger gripes with Wear 2.0 - I'll let Ryan handle that. Suffice it to say, I don't find Wear 2.0 a big improvement on the 1.x iterations, mostly because it doesn't seem to have solved many of the issues that plague Wear (third party app support, battery life, cumbersome system navigation), and has also created some new ones of its own, like notifications, which are now even more frustrating to deal with, as they're all unbundled from one another into individual cards, which really makes no sense. Again, see Ryan's review linked above - he gets into the nitty gritty on this a lot better, and I agree with his sentiments.

The Huawei Watch 2 has proven an uncommonly hard thing to like. While it ticks all the boxes for a modern Android Wear device (well, most - the rotating crown would have been nice), Huawei has executed the product in a way that just defies common sense. After all the praise the original Huawei Watch received for its uncompromised design, good looks, aesthetic adaptability, and solid ergonomics, it's like Huawei decided none of that mattered when it developed the Watch 2. Every effort went into cramming in features, and it seems materials and aesthetics took a back seat to function at almost every corner.

The result is a smartwatch that simply doesn't compare well to its predecessor. Sure, it does more, but it's lost almost everything that made the original a winner with critics and owners alike. We still don't know what it will cost or even when it's coming out, by the way. There's also a significant likelihood this LTE version won't even launch in America and that we'll only get the slightly-less-ugly Classic here.

If the Classic comes in at a really good price (which seems doubtful), maybe, maybe it could be an alternative to the LG Watch Sport. But I'm not holding my breath here. All in all, the Huawei Watch 2 is disappointing, and that's... disappointing. There were high hopes for this watch, and I've scarcely seen anyone say a good thing about it since it was announced. That's not good news for Huawei, and it's not good news for Android Wear. Neither seem to be able to make a compelling smartwatch, but Huawei went the extra mile to really drive home Wear's shortcomings for me on this one. 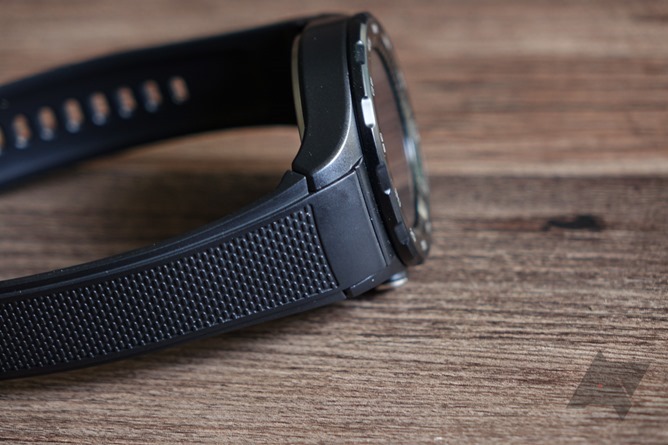 [Update: Another pic] More images and European pricing for the Samsung Galaxy S8 and S8 plus leak