Welcome to the latest entry in our Bonus Round series, wherein we tell you all about the new Android games of the day that we couldn't get to during our regular news rounds. Consider this a quick update for the dedicated gamers who can't wait for our bi-weekly roundups, and don't want to wade through a whole day's worth of news just to get their pixelated fix. Today we've got a hectic Space Invaders like arcade game, a fun pixel-based indie local multiplayer, an endless runner digging game, a neon arcade-like twin-stick roguelike, a pleasant looking old-school strategy RPG, and a colorful endless road building game. Without further ado:

Self-described by Puppy Games as "retro chic", Titan Attacks is a wonderful throwback to the classic arcade shoot-em-up, with a modern upgrade to the gameplay and looks. This is a game very reminiscent of Space Invaders, where you will be shooting ever-advancing aliens while trying to dodge their numerous projectiles. Adding on top of this core arcade-like gameplay is a coin earning mechanic. These coins can be used to purchase new Titans, in order to customize your looks and strengthen your abilities. There are in-app purchases included, which are used for buying more coins as well as removing advertisements. If you choose to pay the $4.99 it costs to remove the ads, you will also halve how long it takes to earn coins through gameplay. Essentially you unlock the content of the full game through a singular IAP. Not bad if I do say so myself.

Battle waves after waves of Titans as you upgrade your tank, and save Earth. As the last surviving tank commander on Earth, single-handedly turn back the evil invading alien army attack, drive back the Titans across the Solar System, and defeat them on their homeworld to face the ultimate Titan...  Titan Attacks has the same easy-to-learn and addictive gameplay of the classic arcade shoot 'em up, but is packed full of extras - new features, new strategies, and stylish neo-retro visuals. Battle swarms of alien fighters, bombers and giant boss motherships, over 5 unique worlds and 100 levels of frantic action. Earn bounty money and upgrade your ship with extra cannon, rockets and lasers. This game is 100% free to download and play. It is ad supported. You can pay a small fee in the game to permanently disable all ads if you wish. 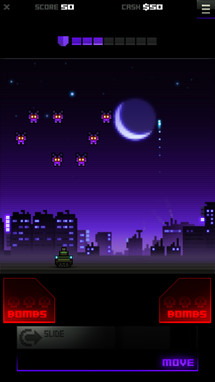 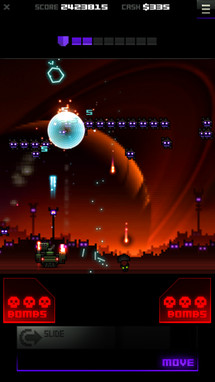 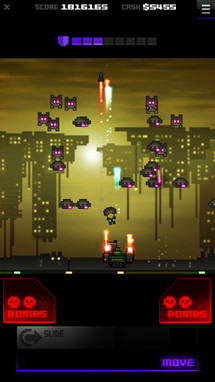 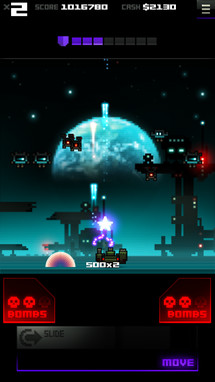 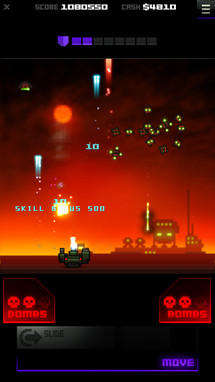 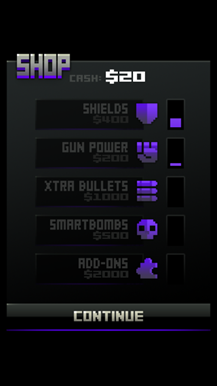 Anycrate is a fun little multiplayer game that demands quick reflexes and perfect timing. It features local co-op, player-vs-player, and player-vs-A.I. So not only can you play with or against your friends, you can also play on your own if you so wish. The gameplay itself is quite simple in that you have two controls, jump and shoot. It is here that you will need your quick reflexes and perfect timing, as you want to not only avoid the projectiles being shot at you, but you want to time your shots to where they will hit your target. There are advertisements found in the game, luckily they are optional in their function of unlocking new cosmetic characters. There is also a singular in-app purchase of $1.99 that will unlock all characters, thus negating the need for the ads.

ANYCRATE tries to make local multiplayer on mobile devices comfortable and enjoyable. Each player can JUMP and SHOOT and each of them has to use these abilities and be tactical in order to hit the opponent and become the king of game's universe. Different characters and levels are in the game to dramatically change the gameplay and the way of fighting. Also, if you don't enjoy fighting against your friend - you can fight with him against tiny thieves and protect your gold in the cooperative mode. 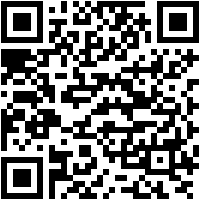 Digby Forever looks a lot like a mix of Dig Dug and Mr. Driller. Setting a goal of digging down as far as you can, all while avoiding obstacles and enemies should be familiar to any fans of those franchises. While the looks are reminiscent of an old-school arcade game, this is at its core an endless runner. A tried and true gameplay style that should be familiar to most of us. Really the main draw is the digging aspect and the nostalgia it brings. While this is a free-to-play title with in-app purchases that range up to $4.99, there are advertisements included in the game as well. Luckily the highest IAP of $4.99 will remove the ads.

DIG. DODGE. COLLECT. WIN. Help Digby dig, set off bombs, dodge cave-ins and evade a colourful cast of foes in Digby Forever - an explosive new endless digger from 3 Sprockets. Swipe to start moving in a direction. Tap to pause and resume movement in that direction. It's that simple. Watch out for crazy monsters, lava, lasers and even cave-ins as you dig as deep as you can uncovering crystals. Mix up the game using powerful ability cards that change your experience in fun and unpredictable ways. 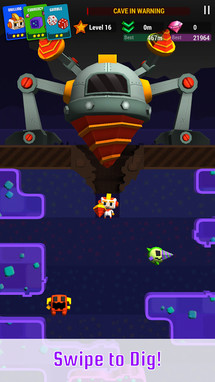 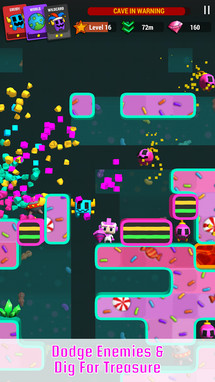 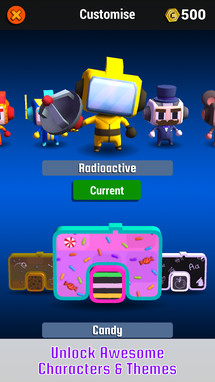 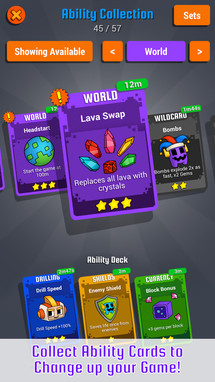 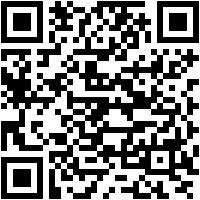 Another throwback to the gaming of yesteryear, Virexian is a twin-stick shooter roguelike that looks like something right out of the 80's. The bright neon colors along with the top-down tank shooting action would fit quite well in a Tron movie. The gameplay itself is also quite solid. You use both thumbs to control your tank and its weapons, navigating around short stages destroying any enemy you see. Another great aspect is that this is all procedurally generated, so you will never know what will be coming at you next. Overall this is a solid twin-stick shooter that has zero advertisements and a singular in-app purchase of $1.99 that unlocks the full title.

Play sessions are quick and challenging in this on-the-go action roguelike, featuring an infinite number of randomly generated levels and enemy patterns along with tons of weapons and other gear. Every round is guaranteed to be different as you fight your way through hordes of enemies, all to the steady beat of a crisp chiptune soundtrack. Finding a solid tactical RPG on Android can be difficult. Especially if you are looking for one that is not filled with in-app purchases. Heroes 2 looks as though it is here to help with that predicament. This is a turn-based strategy RPG at its core, where you fight it out on a set grid in order to "save the kingdom". The presentation is simple yet intuitive, with a pleasant look all around. The best part being, there are zero in-app purchases or advertisements to be found, as the game is singularly priced at $1.99 for the whole of its content.

Heroes 2 : The Undead King is a turn-based strategy game in a fantasy world. A new menace looms over The Kingdom. The Undead King is preparing dark forces to return and conquer the world. You are a brave knight travelling in search of pieces of a map to a powerful artifact, which could help to defeat the undead and save The Kingdom. Be ready for an exciting journey with lots of battles, powerful artifacts, magic and dungeons. 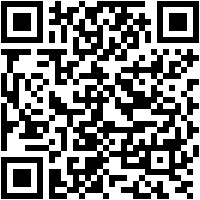 Endless Runners on Android are a very popular genre, so much so that they tend to get stale pretty quick. Having spent some time with Endless Road Builder, I am of the opinion that it at least tries to elevate the stale format. This is an endless runner where you try to build the very road you are traveling on. Basically, you hold your thumbs down on the corresponding sides of the screen that you want your road to swing out from. This takes a good bit of timing and awareness. There does appear to be a few in-app purchases found in the game that range up to $2.99. They look to be mainly used for coin packs and a few vehicle purchases. There are advertisements between each round of play as well, but hopefully a purchase will remove them. Sadly this is not made clear in the description of the game.

Endless road building with a brand new mechanics. Build from left or right. Connect islands using roads and bridges in a fast arcade style. Track your favourite car and drive through unique worlds. Be aware of different obstacles including moving islands, lighthouses and monsters. 3D Touch lets you slow down and score higher. 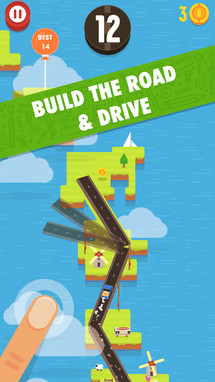 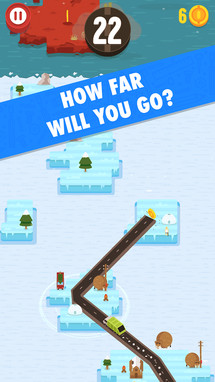 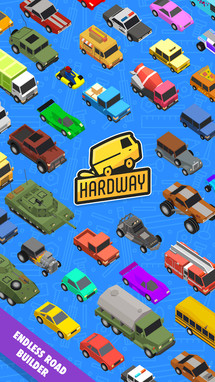 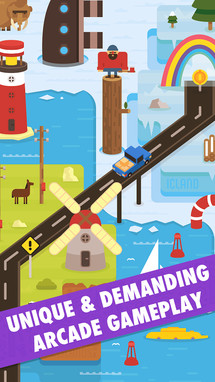 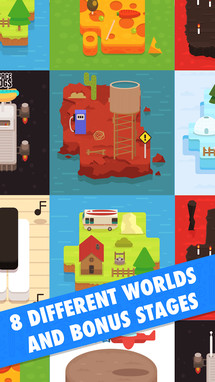 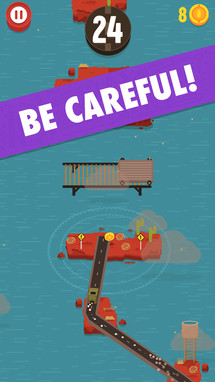