Fast charging is getting really, well... fast. It seems like every phone that comes out has some new version of fast charge tech with bigger numbers. Now Meizu has the biggest numbers yet. Its Super mCharge system can push 55W of power to the phone. By comparison, the Pixel XL can only handle 18W.

According to Meizu, it takes only 20 minutes to completely charge a phone equipped with Super mCharge. The capacity of this theoretical device is a little murky, but I'd assume 3,000mAh. That seems to be the default for this sort of metric. The charger is rated at 11V/5A, which is why it can push so much power. Google's plugs are 5V/3A. Meizu is using a type of DC to DC converter known as a charge pump to control the voltage. It says this allows Super mCharge to reach a whopping 98% efficiency, which is a little hard to believe. Charge pumps are known for being efficient, but usually only 90-95%. 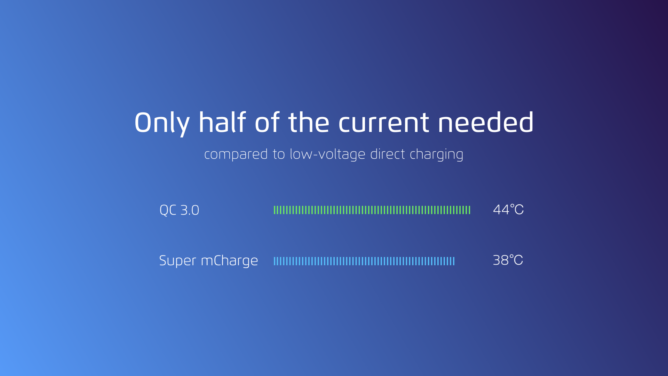 Temperature is often a concern with fast-charging tech, but Meizu notes that it has managed to keep its batteries relatively cool. Meizu designed a new battery to go along with Super mCharge that can survive 800 cycles with 80% of its capacity and does not exceed 100 degrees F (38 degrees C) during charging. Considering all the specialized hardware it takes to do this, OEMs won't just be able to slap a power control IC into a phone and use Super mCharge. That's assuming Meizu would license it. I suspect this system will be limited to Meizu's own phones.