Google Home is still relatively new, so there are still quite a few things on the immediate to-do list. An update to the app began rolling out yesterday and it brings one commonly requested feature: a way to check out the alarms and timers set on Google Home. On top of that, there is evidence that multi-user support is in the works, and probably includes individual voice recognition. 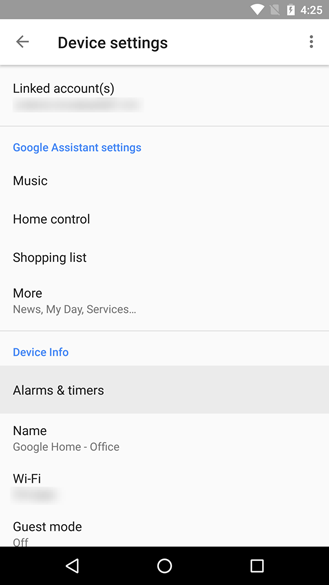 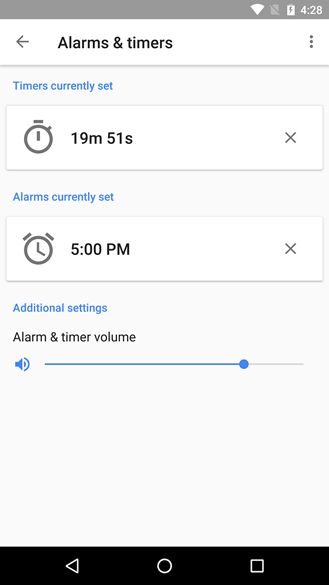 If you don't mind digging through a series of screens to get there, this update adds the ability to access a list of the alarms and timers set on a Google Home. Not only that, but you can also change alarm and timer volume separate from the standard volume used by everything else.

To find this well-hidden screen, open the Home app and pick Devices from the navigation drawer. Find the Google Home device you want to check out and choose Settings from its overflow menu. Now look down to the Device Info section and you'll find the line titled Alarms & timers. Ok, it makes sense that it's here, but who is going to think to look for it...

The screen includes a volume slider that sets alarm and timer volume separately from the volume used for voice responses, music, and anything else that might come through Google Home. If there are any alarms or timers set, they appear above the volume slider. Alarms show the time they are set to go off and Timers show a countdown. Either type can be deleted by pressing the 'x' button, but there's no way to modify the ones that are in there or add new ones. Hopefully these functions are added in the future.

So now you can easily(-ish) check which alarms you have scheduled and clean up the ones you don't need.

Oh, there's also a round icon

It slipped my mind between finding it and writing this post–a lot of other stuff happened–but there's also a round icon for those devices and launchers that will use it. There's nothing too special here, just the regular icon from the Google Home app sitting on a white background with a shadow behind it (i.e. the dinner plate).

So we can continue to dream about a day when these icons are actually designed to be round or somebody acknowledges that this strategy for icons wasn't really worth it.

When Google Home was first released, the near-universal complaints were about it being limited to a single Google account and an inability to distinguish between voices belonging to different people. Not only does this mean things we didn't do can impact our Google accounts, but Google Home can often react to sounds from the TV, music, podcasts, or whatever might be playing in the environment.

Google has acknowledged voice recognition was in the works, but it wasn't ready to launch yet. Unfortunately, this isn't a teardown to say the feature is ready to launch, or even necessarily that close. Rather, we now have the first tangible signs that it's being implemented.

Right now, the evidence is made up of a few empty strings (they have names, but no content) acting as placeholders during development, each with a "mu" prefix that's short for multi-user. These will be used in a screen for adding users and presumably setting up voice recognition profiles.

It's definitely good to see this is in the works, but there are still no clues to judge how close it is to happening.

In the meantime, it also looks like the team at Google feels the setup process could be a little more informative about the current limitations. There's a new message suggesting that other people should be given a heads-up that anything they say to Google Home will go onto the account of the registered user.