For most web users, SoundCloud is just a quick repository of sound files for playing back in a browser - Imgur for songs and audio clips, if you will. But for those users that get deep into the highly specialized community of artists and designers on the platform, SoundCloud offers its premium "Go" package. $10 a month gets you an expanded selection of exclusive tracks, ad-free browsing and listening, and offline listening in the Android app. Today the service is shaking things up a bit: there's a new mid-tier service level for just $4.99 a month, while the old plan is now called "SoundCloud Go+." 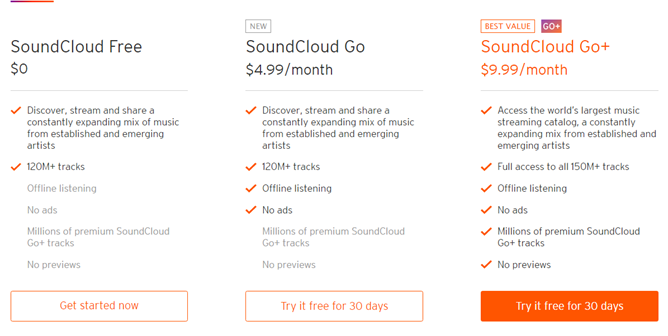 So what do you get for five bones a month? Some of the tracks and the "no preview" function. Specifically, the full paid library is 150 million tracks, while the $5 version is limited to 120 million. That seems like a pretty good deal, so long as you don't mind getting previews. SoundCloud's press release does say that the company will be announcing more exclusive features for the pricier Go+ tier later this year, but so far there's no indication of what they might be.

SoundCloud Go and Go+ don't require a contract and can be purchased using the Play Store's recurring payment system.

“SoundCloud’s unique mix of content, much of which can’t be found anywhere else, is an incredibly attractive offering for music lovers who are at the forefront of what’s happening now and driving what’s next in music,” said Alison Moore, Chief Revenue Officer at SoundCloud. “SoundCloud Go answers the call from our users who want the ability to take the huge catalog of content found in SoundCloud’s free, ad-supported offering with them anytime, anywhere, without interruptions, at a very affordable price. And at the same time, we’re now giving users who haven’t made the jump into a music subscription plan, a robust, fully on-demand option at an accessible price.”

Alex Ljung, Chief Executive Officer at SoundCloud, adds: “SoundCloud offers the largest, most diverse mix of established and emerging artists, all in one place. Now with three ways to experience SoundCloud: SoundCloud’s free, ad-supported offering, SoundCloud Go and SoundCloud Go+, users have even more freedom to choose the features and content they want, at the price that fits their budget. By expanding our offering, we not only enhance the experience for listeners on the platform, but also unlock new revenue opportunities to further expand our creator-payout program.”