I love watches and wear one all the time. So I was one of those who got really excited when the first smartwatches started hitting shelves, and I remain someone who likes them. I have owned a few Android Wear devices, a couple of Pebbles, and I've even tried out the Apple Watch and various iterations of Samsung's offerings over the years. What I have not tried, until now, is the so-called "hybrid smartwatch."

Martian is not an unknown or new brand, but I have never had the opportunity to test out any of its products. I finally have rectified that. The Martian mVoice series of smartwatches is trying to compete with the likes of Wear, Tizen, and watchOS by offering a wrist-mounted notifications mirror while keeping a sense of style. Each watch in the product line comes with Alexa, who handles voice queries similar to the wearable versions of Google Now/Assistant or Siri.

All of that sounds great on paper, but does not really perform well in person. Spotty Bluetooth connectivity, wildly varying battery life, and the fact that Alexa on wearables has a long way to go all lead to the fact that the mVoice fails to do exceedingly well at anything except tell the time.

Due to the fact that there are quite a few different models in the mVoice line, I will only be discussing the "smart" features and briefly touching on the design of the model I received. For reference, I am using the AE-01. As I have been told, the notifications and Alexa features are identical across each watch so a customer only need choose the device that best suits his or her style.

From here on, I will be referring to the entire line of products when I say mVoice.

I respect the concept of the "hybrid smartwatch." You can still get a watch that matches your style and have the benefit of seeing those emails or texts on your wrist, and that's a great idea. However, that implementation has to be done correctly.

Let's start with the basics. Like every other smartwatch, the mVoice connects to your phone via Bluetooth and the companion app. Setup is actually pretty easy, you turn the watch on and then hold the top button to put the watch in pairing mode. Once everything is connected, you go into the app to activate Alexa and set up your notification settings. 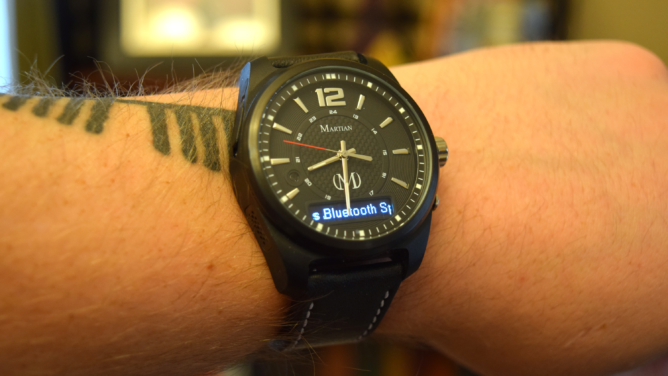 Each app must be configured manually, where you select which ones will be sent to your watch and their individual vibration patterns when they come in. At its core, this is pretty neat, but is very tedious if you switch phones or wipe your main device often (like I do; first-world tech blogger problems).

When the watch's screen is blank, hitting the bottom button will bring up a scrolling menu where you can activate stuff like the remote camera shutter, DND mode, and speaker volume. The top button is your voice assistant button — a single click will activate Google Now or Siri and a long press will bring up Alexa. I will talk more about her later. 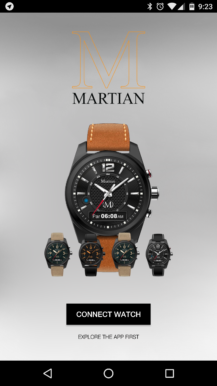 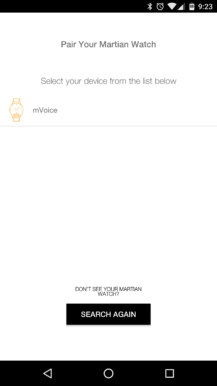 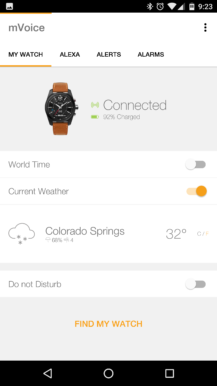 Notifications come in one at a time and individually, as you might expect. Any sort of message-like thing (email, SMS, IM, etc.) will appear with the sender's name first, a subject line if applicable, then the first few lines of the message. It gives you the basic gist of what's going on for longer things like emails or massive texts. For most things like Telegram messages, however, I was able to read the entire thing. Thing is, once it's done scrolling, you can't go back (you can adjust the time length of the scroll). At the end of the line, you'll be given one or two options: press the lower button to dismiss and the top button to delete (again, if applicable). So while it's not as robust as Wear, watchOS, or Tizen's notifications, it gets the basic job done. 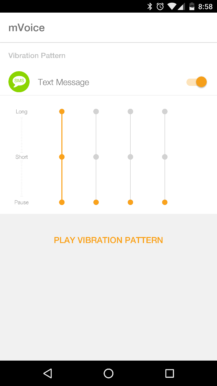 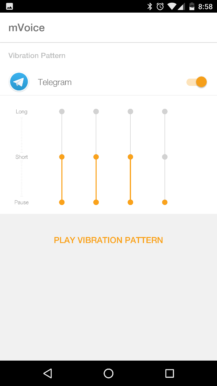 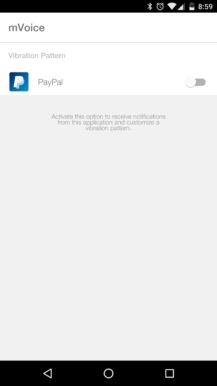 Moving on, I think it's time to talk about the problems, issues, and other weirdnesses. We'll start with connectivity headaches. I had no end of trouble with keeping this watch connected to five different devices, with connection dropping constantly. Reconnecting is also a pain, especially if you reboot either the watch/phone or walk out of range, and requires going into the mVoice app to manually reconnect. Granted, I have had issues with other smartwatches and it's likely because Bluetooth just sucks. Mind you, I tried this watch with some weird phones like the Meizu Pro 6 Plus and Honor 6X, but I also used it with a Nexus 6P and an iPhone.

Next up is how the watch handles multiple simultaneous notifications. By this I mean either the several emails I get in the span of a few seconds or when the watch reconnects to the phone after the latter has received quite a few items. To perfectly explain what I am talking about, let me tell you a story from not-so-long ago.

I woke up one morning and reconnected the mVoice to my Nexus 6P, as it seems to require a reestablished connection after several hours of inactivity. Over night, I received some 40-50 emails that I had dealt with before putting the watch on for the day. For the next three hours, give or take, the watch spammed itself with those emails. It went through each one individually, informing me that I had received a new message. It climbed through to the 40-50 number, rested for a few minutes, then started again. Factory resetting the watch only postponed this behavior. It only quit because the battery was completely dry, even though it had started freshly charged. What made this little occurrence even better was the fact that I was in my morning classes, one of which included an exam that I had to endure with a watch vibrating and lighting up the screen non-stop. 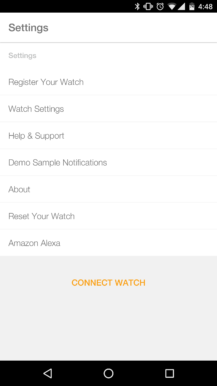 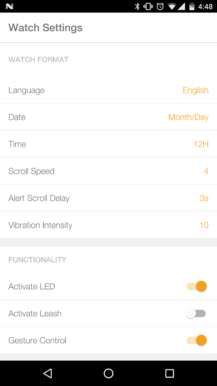 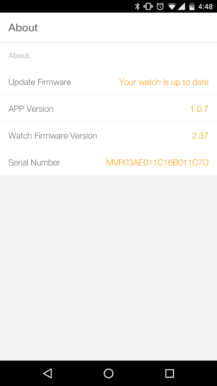 If the watch manages to behave, battery life is actually pretty good. On a normal week with a slow day or two, the watch lasted close to five days, as advertised. In a busier week, I averaged between three and four days. However, since my wonderful story happened several times, I have to add a low range of two to three hours of life... which basically means to expect somewhere between two hours to five days on the battery. That wide of a range is pretty unacceptable, especially since the unit I received is entirely unpredictable.

I have put Alexa in her own sub-section because, being one of the main marketing points for the mVoice line, she deserves it. This is one of the first times we have seen Amazon's personal assistant on a watch. And let's be honest: she has some improvements to make. 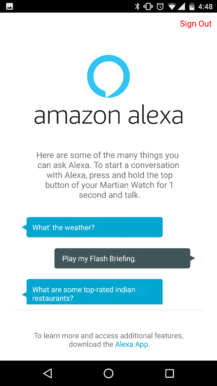 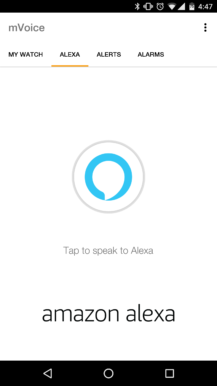 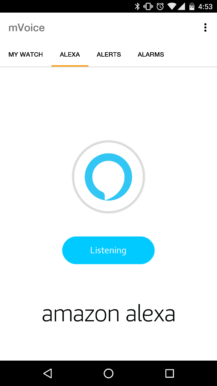 There are two ways of accessing her: through the watch and via your phone. The former allows you to perform normal smartwatch personal assistant queries, e.g. weather, agenda, etc. On the other hand, you can talk to Alexa via the mVoice app in the "Alexa" tab or by downloading the official app by Amazon from the Play Store.

Alexa has other functions that we'd expect from her, such as access to skills (I need to remember to try out that new Plex one). You can control compatible smarthome devices and order products straight from Amazon, too. So that is all very exciting, especially when it works right. Most of the time, however, Alexa hangs on the "Thinking" screen on the watch and phone (mVoice app). She eventually times out and won't work again until the devices are rebooted. I also had the watch get stuck on the "Listening" prompt, even though I was practically yelling into the mic.

Alexa shows promise and I hope that she gets the needed improvements, especially since we're seeing her pop up on a lot of devices lately. But for now, she's more work than she's worth. 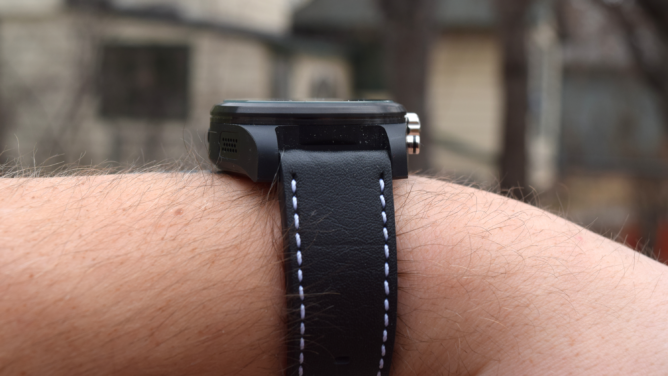 If you decide to purchase a Martian mVoice watch, you will have plenty of styles to choose from. Like I mentioned back at the top of this review, I received the AE-01 Black Resin model. While closer to a style of watch I might buy (especially with the black face and silver indices), there are still some caveats. The first is how thick it is. Coming in at 15mm, it's a chunky thing. Obviously, that's to compensate for the hybrid internals, both batteries, the microphone, and the speaker. Regardless, it makes my LG Watch Urbane look svelte.

The body lacks the premium feel of a nice watch and the black coating does not help things. The leather band feels subpar (even though it's Italian), though still a step above what Motorola put out with its Moto 360 line. It is a standard 22mm strap, so it's easy to swap it out for something more premium or whatnot. 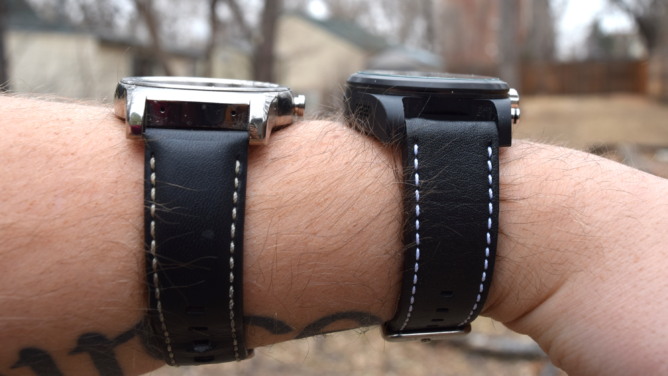 The 96 x 16 OLED screen is nice and visible in all lighting situations. It occupies the lower bit of the watchface, which presents the "flat tire" appearance. I don't really mind that in a full bonafide smartwatch, like the Moto 360, but it's odd to see it on what looks like a traditional watch. I know it seems like I am making something out of nothing, but if you're bothered by the "flat tire," then you will be very bothered by the mVoice line in general. 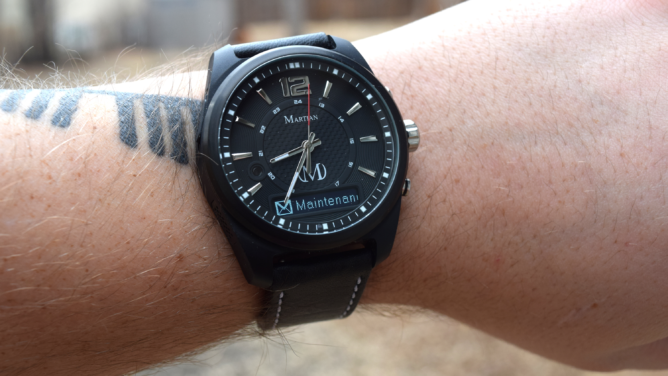 I said at the top of this review that I love watches. I am also a huge fan of smartwatches, rare as we seem to be these days. The concept of the so-called hybrid smartwatch is exciting to a watch fan — classic styling with basic notifications and the like. But I have not seen a good one yet, which is saddening.

Martian certainly tried with the mVoice line and I give the company props for that. There's a lot going on in these clunky things. However, in trying to do too much, the only thing that these watches do well is tell the time (which is a huge plus). Alexa feels clunky and the notifications can create more problems than they solve, which makes the battery suffer. Luckily, when it dies, you're still left with a timepiece.

The overall build quality and design are not what I would expect from a $200 watch, regardless of whether it's traditional, hybrid, or smart. I mean, we had the Asus ZenWatch 2 that started at $130 and it was a full-fledged Android Wear device.

I like the idea behind the mVoice... I really do. I just don't think it's ready yet. Maybe some of the issues can be fixed in a software update, but I am not holding my breath.

General Mobile GM6 announced as the next Android One phone