I don't know how Sony hasn't run out of alphabet letters and rectangular designs by now. Year after year, or more like half year after half year, the company churns another phone that distinctly looks like almost every Sony phone we've seen to date (which might be a good or a bad thing, depending on how much you like the design language) and that has another letter or noun added in the name. I'm honestly confused, but I understand that it has its appeal for a small subset of people, so I'll put my judgment aside and carry on telling you about these new Sony phones announced at MWC today.

First up is the Xperia XZ Premium, which will be taking the crown as Sony's new flagship thanks to a Snapdragon 835 processor and an all-singing and dancing camera. Here are the detailed specs you can expect to see:

The highlight here is obviously the camera, which Sony says is "so advanced it captures motion that the human eye can’t see." It brings tech used on Sony ‘α’ and Cyber-shot cameras along with a memory stacked Exmor RS sensor to create a new system dubbed "Motion Eye." The result is 5x image scanning and data transfer that lets you record at up 960fps and play back at super slow motion. Sony is also adding many features we've seen in smartphone cameras recently, like taking pics when it detects motion before you even tap the shutter so you don't miss any moments. The front camera isn't shabby either, at 13MP with a wide-angle lens and F/2.0 aperture. 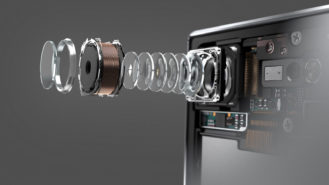 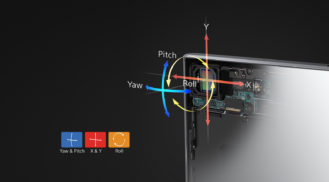 The rest of the Premium's specs are just as impressive. We have a 5.5" 4K HDR screen with a selection of compatible content from Amazon Prime Video, a Snapdragon 835 processor — the same one that LG couldn't add to its G6 because it's rumored that Samsung flooded Qualcomm with the first order — with an X16 LTE modem for super fast connectivity speeds, and a USB-C charging port with USB 3.1 for faster transfers.

The exterior is a "glass loop surface" with a mirrored effect on the back and the entire phone is IP68-resistant. Sony is shipping it with Android 7.1 Nougat and including Smart Stamina mode, Xperia Tips, and Xperia actions to make your life a little easier and add some smarts into the phone. 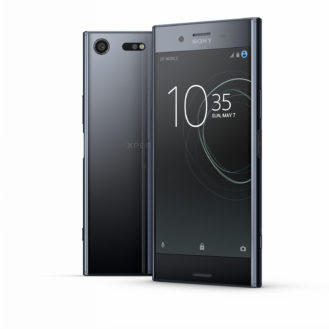 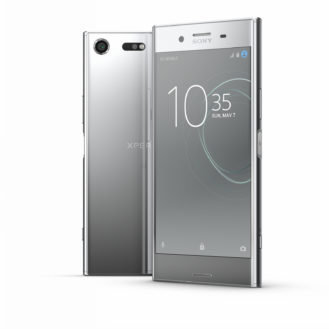 The Xperia XZ Premium will be available globally in Luminous Chrome and Deepsea Black, starting late Spring 2017. That means it won't probably ship until late May or June, when Qualcomm has enough Snapdragon 835 processors to fulfill Sony's order. There's no pricing information yet, but if what we heard is right, you should expect the tag to be around the $900. Sony will also sell you accessories like a quick charger and a Bluetooth headset with speaker and remote camera shutter.

The second phone announced is the Xperia XZs, where the s means something like a second iteration. It's an updated version of the Xperia XZ, which was introduced last September at IFA. The main difference is that the camera is now the same as the XZ Premium, i.e. the same Motion Eye system with 960fps video capture, super slow motion, predictive capture before pressing the shutter button, and so on. 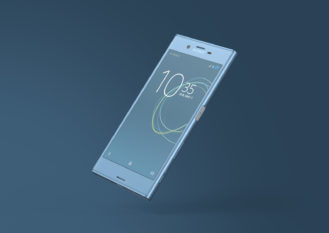 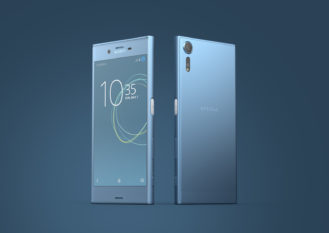 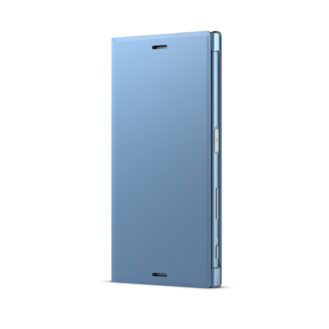 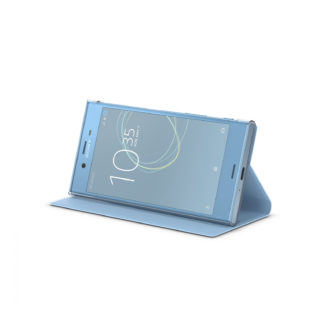 The Xperia XZs will be available from the beginning of April 2017 in Ice Blue, Warm Silver, and Black, and it looks like you'll be able to purchase a case to go with the nice blue color.

Encapsulating decades of Sony innovation, Xperia XZ Premium incorporates imaging know-how embedded on Sony ‘α’ and Cyber-shot™ cameras to create the new Motion Eye™ camera system, for capturing life in ways no other smartphone can.  The first smartphone to feature a memory stacked Exmor™RS sensor with technologies usually only found on premium compact cameras, it provides 5 x faster image scanning and data transfer. This means you can create sensational videos from your everyday moments by recording in 960 frames per second, providing Super slow motion video playback that is four times slower than other smartphones[i] giving you more detail than has ever been possible in the palm of your hand. Plus Predictive Capture stays one step ahead and automatically starts buffering images when it detects motion even before you press the button, so you can find a moment your eye may just have missed from a selection of up to four shots taken a second before you clicked. On top of this, the new 19MP high resolution sensor has 19% larger pixels to capture more light and provides exceptional detail and sharp images even in low-light and backlit conditions. Additional improvements have been made inside Motion Eye™ to the Bionz™ for mobile processing engine meaning it detects moving objects more precisely to enable Predictive Capture.Clarity, detail and texture are also improved to give exceptional image quality thanks to the redesigned G lens with high optical clarity.

For the first time on mobile, you can enjoy a selection of 4K HDR content from Amazon Prime Video on Xperia XZ Premium. Stream or download select Amazon Originals series[ii] to watch whenever and wherever you want, with intensely vivid colours and breath-taking clarity.

Xperia XZ Premium is powered by the cutting edge Qualcomm® Snapdragon™ 835 Mobile Platform, making it one of the very first smartphones capable of Gigabit Class LTE (up to 1Gbps)[i]. This is possible because of the integrated Snapdragon X16 LTE modem, which has the potential to transform how customers use their mobile devices by delivering fibre optic speeds on the go. The Snapdragon 835 platform also supports stunning graphics, superior performance and enhanced battery efficiency. File transfers are also super-charged thanks to the USB 3.1 connection which is 10 times quicker than USB 2.0 with a transfer speed of up to 5Gbps. And with the USB Type-C™ socket, plugging in is easy because the connector is always the right way up.

With so many advanced technologies working in harmony, it is only fitting that the Xperia XZ Premium has a harmonious design to match, making it beautiful on the inside and out. The exterior has an exquisite glass loop surface which when turned over reveals a luxurious mirrored effect on the back. Every aspect of the XZ Premium is unified, from its seamless flowing lines and intuitive finger-print sensor power button[iii] to the new live wallpaper which moves the elegant loops as you swipe, to the colours you see on screen which are matched to the beautiful colours of the exterior.

Rain is one less thing to think about when you’re out and about with the Xperia XZ Premium. It’s water resistant[iv], dust-proof and reinforced with Corning® Gorilla® Glass 5 on the front and back of the handset, taking beauty and durability to new heights.

Taking intelligence to the next level Xperia XZ learns how you use your phone and adapts and makes recommendations to give you our most smartest and personal experience yet. The battery is maximised with Smart Stamina which uses the Xperia learning engine to accurately estimate how long your current battery will last based on your normal usage. It even warns you if it detects you’re going to run out of power later that day and prompts you to activate Stamina mode. Battery Care[v] and Qnovo Adaptive Charging are also included to protect your battery and keep it healthy up to twice as long.

Xperia Tips and new Xperia Actions offer you handy advice about the features you’re using and even suggests map downloads based on your location, all aimed at making life that little bit easier.

The Sony experience is continued through to the audio and gaming capabilities. High Resolution Audio playback allows you to hear every nuance and detail in a track as if you’re right there with the artist. Sony’s native DSEE HX™ technology even up-scales streamed tracks or MP3s to near High-res quality and if you connect with wireless speakers or headphones, LDAC ensures you don’t lose a drop of sound quality by transferring three times more audio data than normal Bluetooth. Working with your PlayStation®4 console, you can play the latest cutting-edge games on your Xperia XZ Premium. Its advanced processing and fast memory access means gameplay is always smooth and responsive, plus the 4K screen and powerful stereo speakers make it feel like you’re actually in the game.

Xperia XZ Premium is available globally in in Luminous Chrome and Deepsea Black, from late Spring 2017. A range of supporting accessories will be available including the Quick Charger UCH12W[vi] which offers hours of battery time by plugging in for just a few minutes and Bluetooth Headset with Speaker SBH56 which enables hands free talking through the loud speaker whilst multi-tasking and has a remote camera shutter.

Sony Mobile today also launched its Xperia XZs, available in select markets, which takes our flagship device to a new level with the integration of the brand new Motion Eye™ camera. Sony imaging know-how from both ‘α’ and Cyber-shot™ cameras means you get 960fps Super slow motion video, Predictive Capture and all the added quality benefits of the redesigned G lens and new Bionz™ for mobile image processing engine.  Image and video playback look beautiful on the 5.2” Full HD display which is integrated into the loop surface design with the ALKALEIDO™ metal back creating a premium shine and feel. Design hallmarks also include water-resistanceviii and finger-print sensor integrated into the power buttonvii. With its high end processor it’s quick off the mark for downloads and streaming as well as seamlessly running the intelligent user interfaceA host intelligent features such as Smart Stamina run on the Xperia learning engine which together with Battery care and Qnovo Adaptive Charging brings you reliable all day battery throughout the product lifespan. Whilst Xperia Actions can make your life easier by suggesting location based map downloads or usage based automatic setting changes. Xperia XZs is available from the beginning of April 2017 in Ice Blue, Warm Silver and Black. Please check with local operators and retailers for availability.

Huawei P10 first impressions: A competent premium handset that you will never see in America

Moto G5 Plus hands-on: The best budget phone gets better, but not in all the ways we wanted