Cricket giveth and Cricket taketh away. It was only a month away that it increased data allotments on its plans, and now the wireless MVNO is following in the footsteps of the bigger networks with a few announcements, which in this case, might be a little to the detriment of its customers.

First, Cricket is introducing its own version of T-Mo's Binge On, called Stream More. It will stream all HD video at standard definition and will start rolling automatically to users over the next months. Users will be notified with an SMS when it's activated for them and they can disable and enable it through their Cricket account.

Second, the MVNO has started sending messages to its unlimited data plan customers notifying them of a change in strategy. Starting April 2, if your data usage is higher than 22GB in your monthly cycle, your speeds may be throttled during periods of congestion to keep the network running smoothly. 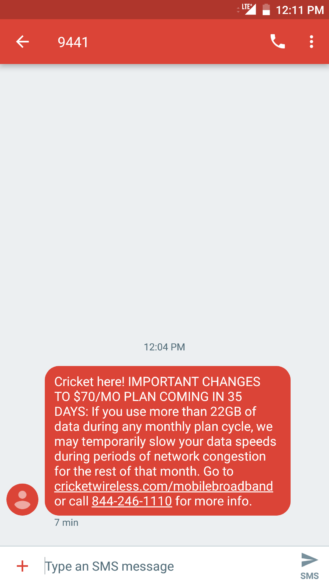 This change is probably caused by the rush we witnessed over the past couple of weeks from carriers to introduce unlimited plans. All of these "unlimited" plans have a cap above which you might experience slower speeds and increased latency during congested periods. (Do check Michael's comparison to see which plan sucks less.) Even if this throttling is coming as a surprise for Cricket's customers, it's almost a given policy at this point and 22GB is in line with the competition.

Lenovo's new Tab 4 Series is a collection of 4 different tablets aimed at kids, teens, and ...