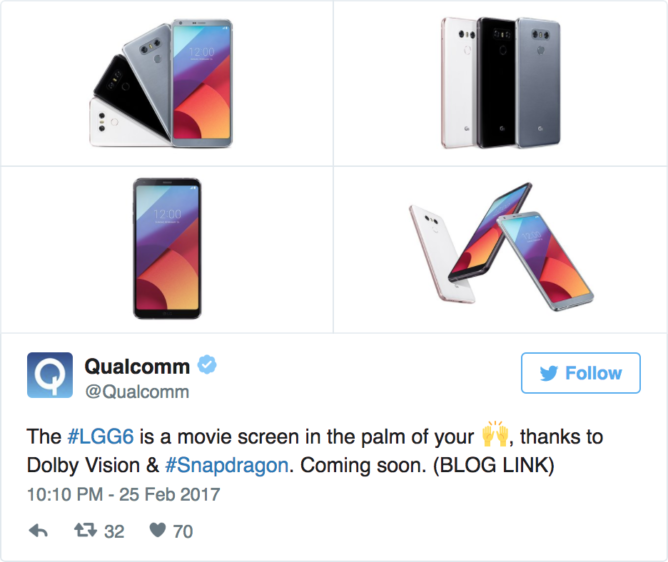 Qualcomm's deleted the tweet. No worries, here's a screenshot.

In this tweet (which was clearly not meant to have gone out yet, judging from the "(BLOG LINK)"), Qualcomm teases that the G6 is "a movie screen in the palm of your (hand emoji)," and touts Dolby Vision technology and a Snapdragon processor. These are likely references to the HDR video that Vision enables, as well as the Snapdragon 821 that the G6 is rumored to sport. It's also worth noting that the G6's 2:1 screen ratio may actually make movies, which are typically filmed in the 2.35:1 ratio nowadays, nicer to watch. What else can we glean from this Qualcomm social media rep's mistake? Well, we can see the color options, which include black, a bluish-gray, and the white/pink combo that everyone's been doing since the iPhone 6s's Rose Gold debuted. (An @evleaks tweet from two days ago revealed that these colors are Astro Black, Ice Platinum, and Mystic White, respectively.) The dual rear cameras are prominent, as are the rounded screen corners (that don't match the curvature of the body!) and stretched display. We can also peep a bottom-mounted speaker, USB-C, the volume buttons on the left, and the nanoSIM/microSD tray on the right.

Oh, and that February 26th date on the lockscreen all but confirms that the G6 is indeed launching very, very soon. We've got some people over at MWC in Barcelona, so we'll be sure to bring you all the G6 information that your hearts desire.

Four of Sony's Xperia smartphones for 2017 appear in leaked image