Mobile World Congress 2017 is starting in just a few days, and some manufacturers are already releasing new products to get ahead of all the madness that will ensue. Case in point: ARCHOS has just announced two new smartphones, the 50 Graphite and the 55 Graphite, which both pack pretty high-end features inside of budget phones.

The 55 Graphite, the more powerful of the Graphite duo, features a 2.5D curved glass-topped 5.5" 1080p IPS display, a 1.5GHz MediaTek MT6737 quad-core processor, 2GB of RAM, 16GB of storage and a microSD slot, 13MP and 2MP cameras on the back, a 5MP unit up front, a 3000mAh battery, as well as dual SIM capabilities. ARCHOS also touts the 55's 7.8mm-thick aluminum unibody design, a fingerprint sensor, USB Type-C port (a must-have in 2017), and Android 7.0 Nougat (also a must-have). Performance doesn't sound like it'll be anything special, but it's definitely got quite a nice set of features on board. 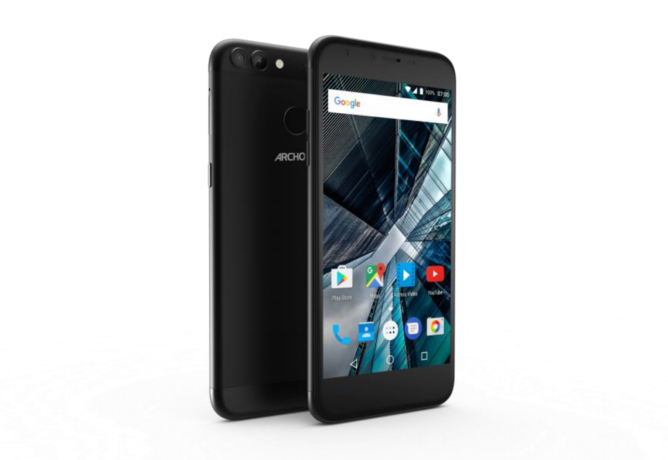 On the other hand, the 50 Graphite sports a 5.0" 720p IPS display with 2.5D glass and 1GB of RAM. All other specs and features should be the same as the 55's, but ARCHOS says that "exact specifications may vary by country." 2GB of RAM is already a bit low in 2017, though, so it'll be interesting to see how the 50 copes with just 1GB.

ARCHOS will be showing these phones off at MWC in Barcelona in just three days, and they will be released in June. Exact pricing and availability haven't been revealed yet, but the 50 Graphite will start at around 130€ (around $138). These phones obviously aren't for purists, but they should work just fine for the average consumer.

Paris – Friday, February 24th, 2017 – ARCHOS unveils the ARCHOS 50 Graphite and the ARCHOS 55 Graphite smartphones, providing users with a true combination of latest technologies for enhanced functionalities: two cameras, 13MP + 2MP on the back and 5MP on the front, a fingerprint sensor, a USB-C port and Google Android Nougat. Demonstrated next week at MWC, these two new models will be available in June 2017, for a reasonable price, starting at 130€.

With its Graphite range, ARCHOS puts at users’ disposal what they expect: larger screens, fast authentication, high speed mobile Internet connection, access to fancy apps, photo and videos to share on social networks, rapid charge for an ease of use anytime.

The ARCHOS 55 Graphite embeds two cameras: 13MP with autofocus and LED flash + 2MP on the back and 5MP on the front. Its dual-lens camera system enables a sharper image with more details as well as ultra-wide angle and shallow depth of field (Bokeh) modes, for capturing and sharing life best moments.

Its ultra-responsive finger print sensor unlocks the smartphone in less than 0.3 second, with the ability to save up to five different fingerprints, not need to worry how you grab it.

In addition to its 3000 mAh Li-Ion battery, the ARCHOS 55 Graphite benefits from a super-fast charge, thanks to the micro USB-C adaptor. Its battery life is also optimizable via the extending features of Doze 2.0 brought by Google latest Android release, Nougat.

It runs Google Android 7.0 (Nougat) in its purest release, with a bunch of new features: split-screen mode, quick reply to notifications, and revamped settings and toggle menus. It gives complete access to the Google Play Store and its millions of apps, games and books.

A lighter version, the ARCHOS 50 Graphite, with a 5.0” IPS HD screen + 2.5D, 1 GB of RAM, 16 GB of internal storage (expandable up to 128 GB via microSD slot) will also be made available. The ARCHOS 50 Graphite and the ARCHOS 55 Graphite will be exhibited on ARCHOS’s booth at MWC 2017 (Hall 6, Booth #B60). Exact specifications, prices (starting at 130€), and availability might vary by country. They will be specified when the smartphones are launched, in June 2017.

ARCHOS, a pioneer in consumer electronics, continues to innovate and revolutionize the consumer electronics market. Among others, the French manufacturer was first with an HDD MP3 player in 2000, a multimedia player in 2003, Google Android powered tablets in 2009, a connected Smart Home in 2014 and PicoWAN, the first collaborative network dedicated to the IoT, in 2016. Today, ARCHOS offers its own line of tablets, smartphones and connected objects worldwide. It also markets and distributes high-value innovative products associated with the tablet and smartphone markets: urban mobility, smart entertainment. With headquarters in France, offices in Europe and in Asia, ARCHOS has become a strong pan-European player and is furthering its international expansion. ARCHOS is quoted on Compartment C of Eurolist, Euronext Paris, ISIN Code: FR0000182479.

Google is having issues with account sign-in, resulting in errors with Android devices, OnHub, ...