There's a new version of Play Music rolling out to users and this one includes at least a couple of things to smile about. This release cuts the size of the app by a good amount and fits in a few interesting changes to navigation and appearance. But the really important change can be found in the Teardown. It looks like Play Music will finally become available to Google's Clock app to sound off for alarms.

We'll start off with something everybody can be happy about: The size of the Play Music APK just got smaller. It actually lost about 10% of its weight, going from 19.9 MB to an even 18 MB. The reduction can be mostly attributed to shedding some images and layouts, not to mention completely wiping out dozens of styles tailored to specific regions, languages, and form factors.

Recents in the nav drawer 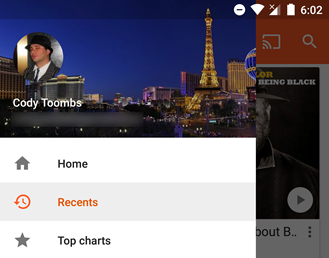 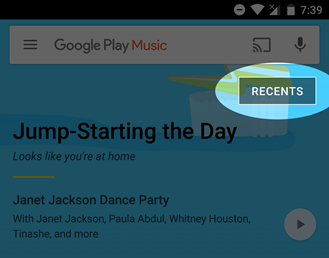 Left: The new Recents line in the nav drawer. Right: The Recents button on the Home screen.

The most notable change we've seen in this update is the addition of Recents to the nav drawer. This doesn't replace the Recents button on the Home screen, but rather adds a second way to reach your music history. The odd part is that the destinations of each method are different in some small, but super annoying ways.

Opening Recents from the nav drawer will present a fairly typical page in Play Music, just like Top charts or any of the other pages in the drawer. It follows the slightly older aesthetic that we've seen in Play Music since it took on the Material Design look. The Recents button, which has been around since the redesign of the Home screen back in November, opens a different type of screen that uses Google's newer look that centers around bold header text and subdued title bars. 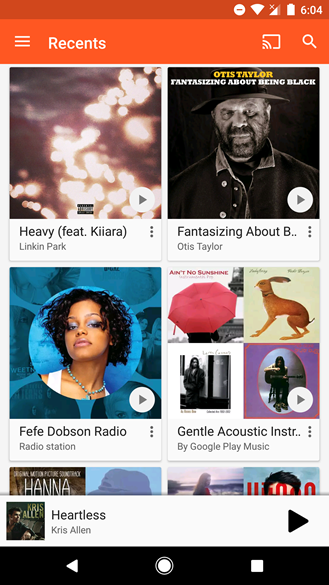 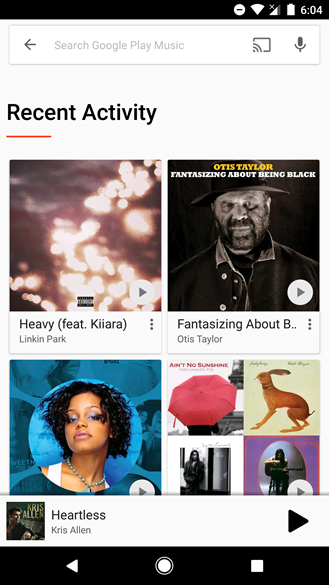 Beyond just the look of these two screens, they also use different title bars with different interfaces to begin a search. Even more frustrating is that they have completely different behaviors for handling the Back button. Tapping Back on the newer Recents page will leave the app and return to the launcher, meanwhile the older version will close just the Recents screen and return to the main Play Music Home screen. (#inb4 people complain about inconsistent back button behavior.)

Two visual changes have been spotted in the latest Play Music update. The one shown above is an animated visualizer graphic that now replaces the Play button on an album or track after it begins playing. The graphic doesn't seem to appear on every screen, track, or album, but it works more often than not, including the personalized stations on the Home screen. This little animation might help to make it a little more obvious that an album is playing, especially since the previous versions actually left the same button in that spot whether it was playing or not.

Finally, the splash screen on app startup has lost its Google Play logo. Perhaps this is a sign Google is relaxing its strict branding requirements, or maybe it was a mistake... Whatever the explanation may be, it happened. 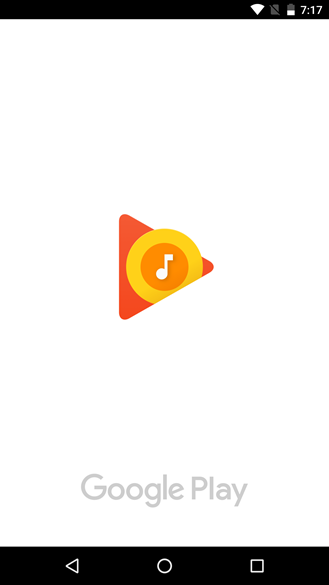 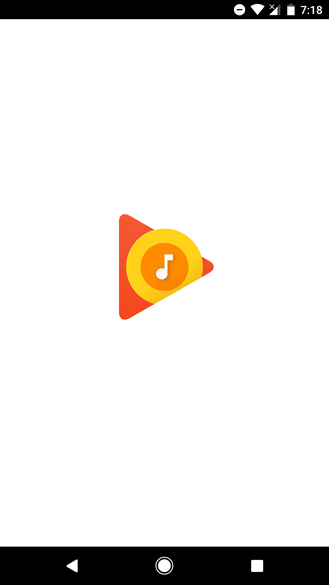 If you're one of the many, many people that has complained that you want alarms to wake you up with tunes from Play Music, it looks like you're finally going to be satisfied. For as long as Play Music has been around, people have been asking to be able to schedule a playlist to help get them out of bed.

The Play Music apk includes a file called browse_configuration.xml which defines a list of apps that Play Music allows to access it for search and playback purposes. Each block specifies a package name for an app and a set of parameters to declare defaults like how many items may be returned in a search or browsing. The latest update includes a new block that clearly names Google's Clock app, or rather, its pname com.google.android.deskclock.

There aren't really any other interesting details to take away from the rest of the block. Unfortunately, this also doesn't give any clear hints about how long it will take for this to happen. However, now that the access has been defined in Play Music, responsibility to add support is now on the Clock app, so we probably won't see this go live until its next update.