Google opted to set loose a small deluge of updates late into Wednesday afternoon. The first we're checking out is the Maps app, which was just promoted to version 9.47. This update doesn't appear to bring any major new features, but it takes a couple of steps to weave the Timeline feature into other parts of the interface and completely redesigns the blue dot menu. We're still looking for changes, so let us know in the comments if you stumble onto anything else.

I'm including this one at the top because it's in the next set of screenshots, but it's only worth a quick mention. There's now a Share button located in the set of shortcut actions at the top of detail pages. This button has moved around a few times over the years and disappeared for a while, but it seems to be back now. Even while it was gone, there was also a Share command in the overflow menu at the top right, but that was never very discoverable, and certainly less convenient. Anyway, it was worth mentioning. Moving on... 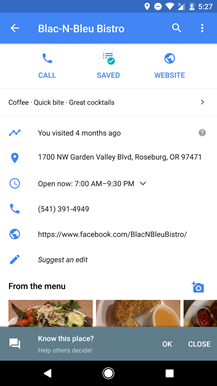 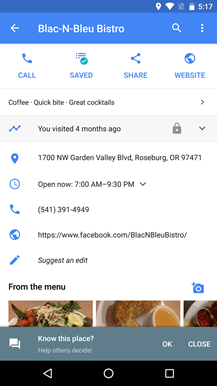 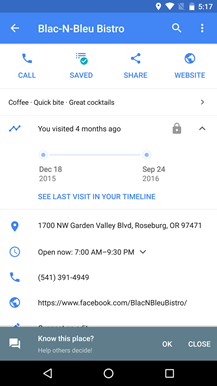 The Timeline must have proven itself to be a pretty useful feature because Google seems to be trying to feature it whenever possible. There are a couple of changes in this update that are all about giving users easier access to the Timeline and its data.

First, check out some detail pages for places you've visited and you're likely to see the row about your last visit has been updated to include a padlock icon and a dropdown toggle. Expand the section (if it isn't already open) and you'll see your most recent visits and a link to the Timeline page. It's a bit more informative and colorful than the old version, which was just a single row with the date of your most recent visit.

For reference, that padlock icon is there as a reminder that only you can see your Timeline info. 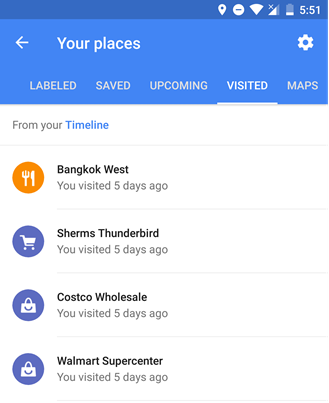 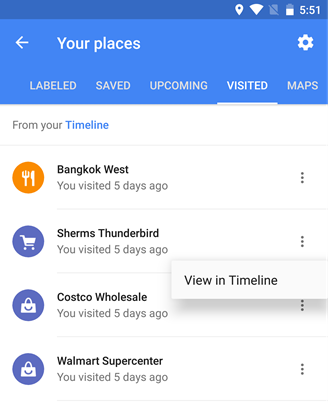 Turning now to the Your Places screen, and specifically the Visited tab, there is a new overflow menu next to each of the places you've been to. The single command leads to the Timeline screen where it will show the path you took on that day.

Both of these changes can certainly save a bit of time if you need to look something up. Of course, for those concerned with privacy, you can always disable history tracking, delete individual stops, or delete a whole day. 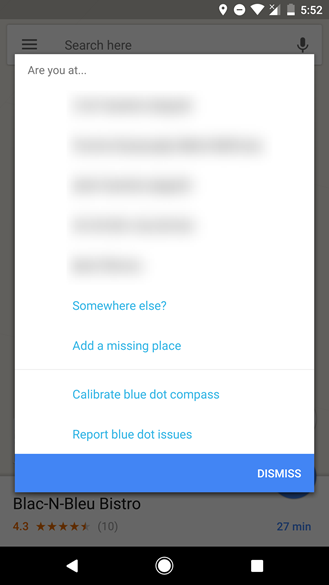 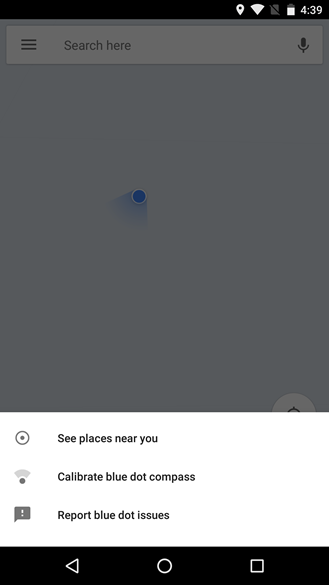 Hidden away behind the famous little blue dot is the last change we've seen so far. The menu that appears after tapping on the dot has been completely redesigned. The old menu was an almost full-length dialog containing your current location, guesses at other nearby places, and several links for things like nearby locations and calibration. The new version has been reorganized and cut down to just three lines: Places near you, calibration, and reporting bugs. Overall, the change probably doesn't really help or hurt the menu significantly, but at least it does look a bit nicer.