But the author starts with a faulty assumption: that it is known that Fuchsia is being developed as a replacement for Android and or Chrome OS. It is decidedly not known. There is no information whatsoever that shows Google intends to replace Android, Chrome OS, or even for Fuchsia to have anything to do with those platforms. However, if you were inclined to Google "fuchsia android," you would receive an endless list of titles asking if this could happen. 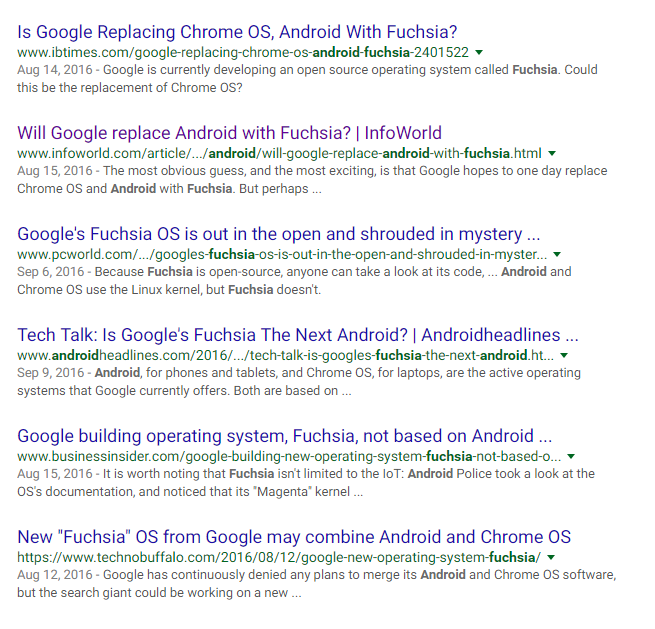 Et cetera. The reason this narrative has such appeal is precisely because we know so little about Google's intentions with Fuchsia. It didn't receive a formal announcement, there is no articulated strategy for the platform, and it hasn't been included or referenced in any other Google products. This vacuum of official guidance on what Fuchsia is and what it is for has led to a sadly predictable state of affairs: the most radical interpretation of Fuchsia's reason for existence is the dominant one. And that interpretation is that Fuchsia is here to replace Android (and Chrome OS) and fix all the things that are wrong with it - which is exactly what everyone wants to hear.

Would you give a damn about Fuchsia if Google came out and said it was an experimental OS project with no commercial plans, or just something they were developing for IoT products? You might care, but there's no way you'd care nearly as much as if you were told it was the panacea to your complaints about Android, Chrome OS, fragmentation, OS updates, cross-platform compatibility, multiple form-factor support, and hell, maybe it does your taxes, too. And we need to realize that when there is such an absence of certainty and primary source information, it is much harder to hold radical interpretations of what little we have to go on accountable. After all, everyone is free to speculate - you're just considering possible outcomes.

And speculation can be a useful tool, especially when your evidence may be cryptic or incomplete. We often have to fill in the gaps to tell a story about something we don't fully understand yet or that is not yet fully revealed. As long as we make sure to keep our leaps of faith clearly labeled as such, there's nothing inherently wrong with that. But instead of using evidence to form a coherent narrative, Fuchsia has become a case of a narrative driving a search for evidence. We know so little, but because speculation that Fuchsia could replace Android came so early and often, that is now the lens through which any discussion of it occurs.

So please, when you see Fuchsia mentioned, or speculation that it "is" Andromeda, know that it is just that: speculation. Last we heard from sources we consider extremely reliable, Android was the basis of Andromeda, and Andromeda would see its commercial debut on a new Pixel laptop later this year. It is possible Google has changed plans around Andromeda, that the initiative itself may have even been scrapped. Though, we have no reason to think so - it's more that we don't know, and haven't heard anything about Andromeda in quite some time.

Is it possible that, one day, assuming things go very well for the Fuchsia project and its viability is consistently proven internally and externally that it could one day replace Android and Chrome OS? Sure. It could happen - no one is disputing that. But to act as though this is a settled matter, an inevitability? It's unsupported, and it's a little irresponsible, not least of which for needlessly getting hopes up about something we know next to nothing about.

Fuchsia could be a big deal in the future. It could end up being nothing. It could end up, more likely if you ask me, something in the middle: A new and useful platform that may not be the answer to every form factor and every problem, but that could find a home in places where its benefits (for example, being a real-time OS) are most needed. But here and now in 2017, it's probably safe to say Fuchsia is still just a glimmer in Google's eye - one with promise, but not one the company's future has been tied at the waist to.

unWorded is a creative typography-based puzzler, now available on Android