An update to the Google Phone app came out a few days ago, but left many people wondering what the changes were. This version doesn't have a whole lot to show off, but a close examination does reveal a couple of interesting things both active and hidden inside the apk. Users now have the option to easily share voicemails as regular files, meaning you can email them to friends or easily stash them in cloud storage. From the perspective of a teardown, Google has also added the first signs of RCS support, meaning we can look forward to some new calling features to come along in the future. 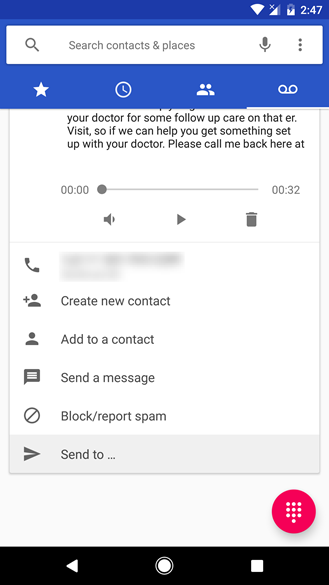 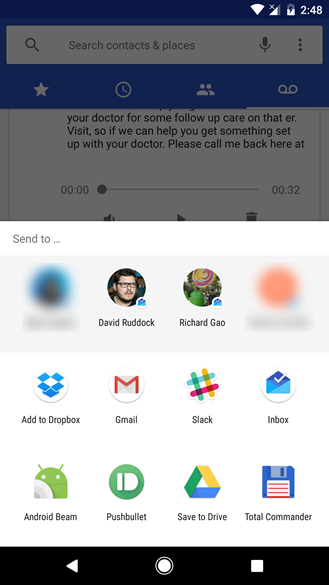 I find it very rare that I have to send voicemails to another person, or even back them up for the future. However, when the situations come up, I don't want to screw around with trying different methods or tricks, nor do I want to open up web interfaces to get it done. Google just made this one of the easiest things you can do by adding a "Send to" button to voicemails.

Just a heads up, this is only going to be supported in cases where the Phone app actually has integration with voicemail. In my case, it's working with Project Fi, and it's possible that's the only service this works with. Sorry, I'm not sure if it works with Google Voice or any other system. Note: Evidently, this also works on Verizon and T-Mobile. - Thanks, jonzey231 and Jonathan White.

To share a voicemail, just tap on a voicemail in the list to expand it, then scroll down to see "Send to" at the bottom of the list. Be aware, this feature is actually pretty buggy at the moment. There are at least two issues I discovered almost immediately. The first is that the file is shared without a suffix or any indication that it's meant to be opened as an audio file. For reference, it's an mpga (MPEG Layer 1/2 Audio) file. In most cases, it can be named with an .mp3 suffix and virtually all audio players should be able to open it without a problem.

The second issue is a bit more confusing. It turns out that it's possible for the audio from the voicemail to not have been downloaded. Attempting to share it will result in an empty file being passed to the receiving app. This issue can be fixed by tapping a button to play the voicemail, which begins by downloading the file. It's an understandable oversight, but it makes for a pretty bad bug. Both of these are a bit serious, so I assume they'll be fixed pretty quickly and an update should be rolling out soon enough. 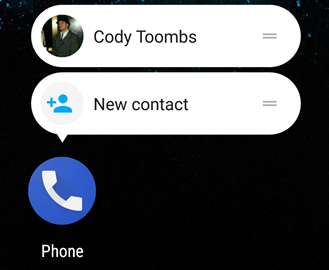 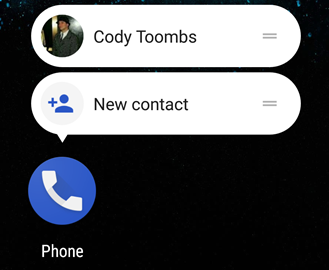 Do you have OCD? If so, hopefully this is the first time you're finding out about this little thing, because it seems to have been driving a few people crazy. Thanks to an eagle-eyed spot by Rodrigo Souza, we can see that this update tweaked the color of the new contact app shortcut icon to match the background of the Phone icon. It's not a huge thing... Unless it has been driving you nuts.

Most of the conversation surrounding Rich Communication Services (RCS) has generally been centered around replacing SMS and MMS. Some carriers have gone further and implemented RCS to enable their own proprietary video calling systems, but that's just the beginning of what RCS can be used to accomplish.

It looks like Google may implement a new feature that uses RCS to simultaneously send an image and initiate a call to another person. The natural assumption would be that the image becomes the cover image for the voice call, giving some context about the call so the recipient knows the reason. It sounds reminiscent to the preview videos shown with Duo, but with just an image.

These strings are probably used in the existing video calling feature, but they might also be used for Share and Call.

The icon likely to be used with this feature, dubbed "Share and call," shows a phone with a paper clip next to it. From the little bit that's available, it looks like users will be prompted to pick an image from their gallery, or possibly take a picture on the spot. Some strings also hint at the likelihood that the camera can be used to take a picture and use it immediately for Share and Call.

This is the first time RCS-related code has turned up in the Phone app, but with a wide variety of potential features, it's likely quite a few more will be added in due time.

[Update: Specs] Moto G5 and G5 Plus press images leak ahead of announcement