But they do want $200-or-so ones, it seems. This morning, Fossil announced its earnings for the fourth quarter of 2016, and while the company did turn a profit of $49.7 million, it missed investor targets substantially. The resulting effect on Fossil's stock wasn't pretty. 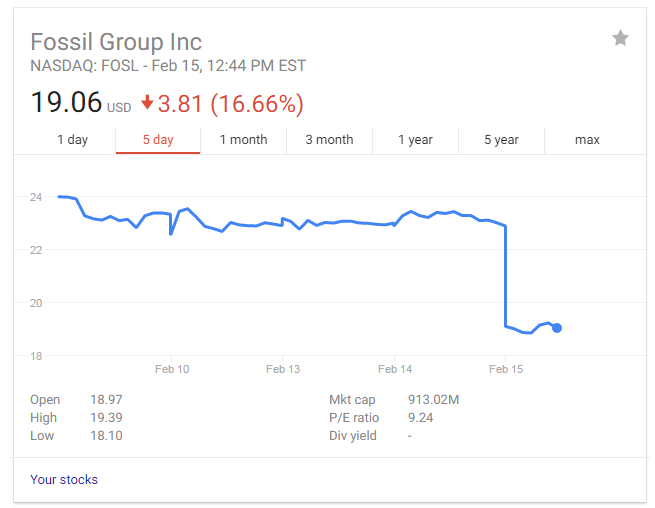 Fossil seemed to throw its smartwatch efforts under the proverbial bus, with the company saying that it only began to see sales when it slashed the prices of its wearables. And slash it has: Fossil has consistently put its first-gen Q Founder on sale, most recently offering the generation one model for just $130 on its own website. Given the Founder 2.0 is a thing (though it's really very little different from the first one), that super sale was probably just to clear out stock.

But even the newer Founder 2.0 has seen drops to as low as $205 on Amazon in the past, and it has been part of sales on Fossil's site. As a result, Fossil indicated during its earning call, apparently, that its strategy with wearables going forward would involve price reductions. New, cheaper Fossil wearables (Fossil did not say smartwatches specifically, as it also has a bunch of "smart"-but-not-smartwatch watches) will be coming in the third quarter.

That smartwatches should be cheaper is a common sentiment I see expressed - but it's not one you see often expressed by the companies making them. Google's new watches made in partnership with LG are $250 and $350, respectively, but I frequently see $100-200 cited as the sweet spot for a smartwatch. The thing is, it's hard to envision them being profitable at such low price points without significant sacrifices on hardware and quality, which aren't strong points for smartwatches in the first place.

Whether Fossil can find the balance of acceptable prices to consumers and profitability remains to be seen, but I have a feeling their investors are going to want to see results soon, or Fossil may be pressured to end its more costly wearable experiments.

HTC is working on a mobile VR product for U Ultra, "not a phone slapped onto a headset"

[Update: Specs] Moto G5 and G5 Plus press images leak ahead of announcement