The Play Movies & TV app is sporting a new look with the rollout of v3.22, and this one won't blow out any corneas in a dark room. The new look brings a dark theme to the app and makes a few tweaks to the layout to increase density in scrolling lists. Hidden inside the apk are some hints that Google is also preparing to integrate with TV providers and streaming services to give users a better viewing experience. 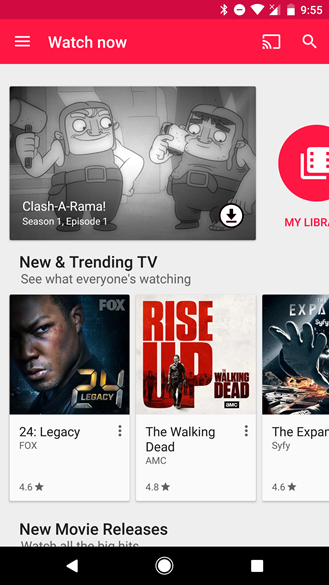 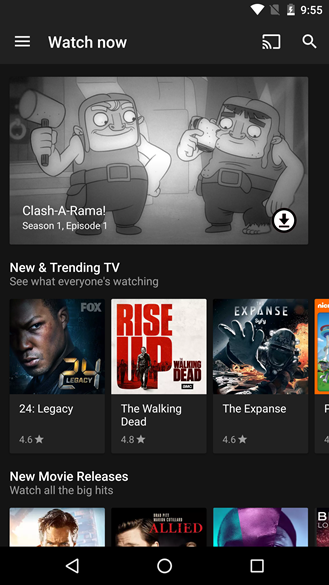 It's impossible not to notice a new color theme has taken over the interface. Forget the white background and bright red title bars, they're gone. Highlighted icons and controls retain a bright red color, but that's about it. Everything else is now painted with a dark gray color, bordering on black. It's not quite a match to the Android TV interface, but it's coming pretty close. The backgrounds on Android TV aren't nearly as dark and the browse lane (yes, that's what the nav drawer-like thing is called) is still red.

There are some other adjustments worth noting, the changes go a bit deeper than a palette swap. Cards on the Watch Now page (the main landing page) have lost the overflow menu with an Add to Wishlist option and any information that wasn't a title or rating. This includes networks, in the case of television shows, and the release year and runtime for movies. The cards themselves also lost some size, shrinking proportionally by about the size of the removed overflow menu. Now more cards fit on the screen. The size adjustments can also be seen in other screens where the cards are much smaller, typically allowing three to a row instead of the two seen in the old version. This is a video app, so the dark theme makes sense. The tendency to use bright colors as prescribed by Material Design always felt a little out of place in Play Movies, so I'm happy about this change, even if it may have swung a little too far to the dark side. On the other hand, I'm not thrilled at the loss of the release year and runtime of movies. Those details may not matter on many films, but they're helpful with sequels and volumes. I also miss the larger cover art, which would have given more space to titles. Sorry, it's a pet peeve of mine to see a title chopped short when it didn't have to be.

A trend began a few years ago wherein some services allowed subscribers to access on-demand content for free. This began with some television networks, HBO, Showtime, and a few others. Now it's common to find many cable networks and other premium services include access to tons of on-demand content for various channels and partners. Based on some new text in the Play Movies & TV app, it looks like it will soon be possible to link up some of those services.

There are plenty of details missing, but the one thing that is clear from the strings is that connections will be allowed with both streaming services and cable/satellite tv providers. This will probably be limited to either partners or companies that choose to build integration for the app, but nothing here spells out the requirements.

Unfortunately, the most important question isn't answered here: What are the benefits of connecting services? I'm reluctant to make any assertions, but it's worth acknowledging that this may not be entirely obvious. The first thing most people will probably think of is that Play Movies & TV will become a single interface with which to watch content from any connected services. However, that may be a little optimistic unless partners are prepared to give up some control over their programming.

One string mentions a "Play Guide" that will want to "know here you watch your favorite content." [sic] To me, this sounds more like Google may be pulling viewer statistics to make better content suggestions and show a compiled program guide so users can plan their shows more easily. This is slightly reinforced by the presence of a string indicating that other applications are installed, which is where the videos are probably going to play from. In short, Play Movies probably won't be a one-stop place for watching shows, but might be there to help people keep track of the shows they want to watch on other services.

Another interesting issue is that these strings only appear in the phone/tablet version of the app, not in the variant specific to Android TV. This may be an oversight and there will be more to see in a future update. Alternatively, the intent may be to leave things mostly the same on the TV platform where connected services and guides are already supported with the Live Channels app, but the app will bring a similar experience to phones and tablets.

However this pans out, it will certainly be interesting to see how Google intends to make this compelling to content providers and users.

As a brief note: Google already has a specific integration for Disney Anywhere, which allows some of Disney's content to be accessible through Play Movies. It's not clear if the new feature will operate the same way, or if it's completely unrelated.