Today, I uninstalled the Daydream app from my Pixel XL, because I hadn't used it in nearly three months. When I reviewed the experience in November last year, I had the sneaking suspicion this is where I'd end up. Not because I felt Daydream was uniquely lacking in some way, or even that the sparse content ecosystem would quickly be depleted through my use. It's because the exact same thing has happened with every Samsung Gear VR I've been sent to evaluate over the years. And Gear VR's Oculus Store has tons of stuff - hundreds of experiences, games, 360-degree videos. But after a week or so, I never returned to my Gear VRs, and I never missed them. (And don't let Gear VR's amazing shipment numbers fool you - those were largely free headsets, and I will bet you dollars to dimes almost all of them just collect dust.)

Far more so even than smartwatches, I think, mobile virtual reality is a solution desperately in search of a problem. And it doesn't help that the solution isn't even very good. Low effective viewfinder size, massive power drain on the connected phone, relatively modest 3D rendering capabilities, and intense heat generation on the connected device are all, at the end of the day, practical problems with practical solutions. We can fix these things. What we cannot fix is something that eats at me every time I try one of these products: What, exactly, is it we're supposed to gain from this experience?

Entertainment in one form or another is essentially the entirety of the pitch for consumer virtual reality right now, but there is scant evidence to suggest that virtual reality as it currently exists actually increases the value or quality of the things we find entertaining. Certainly, it has value in its novelty, but the novelty of experiences like this tends to fade quickly, especially when that novelty means attaching a plastic brick to your head and depriving yourself of sensory awareness of your environment. Of course, that is the great allure of VR, if enthusiasts are to be believed: immersion in the virtual world is the grand promise, with technology advancing ever-further to increase the believability of this immersion. One day, it'll basically be like a holodeck!

Except, it won't. Probably not in our lifetimes, at least. Virtual reality currently focuses on getting one thing right: the visual sensory experience of being somewhere else. It doesn't get that anywhere near close to perfect yet (we'll need 16K mobile displays at ultra-high frame rates for that). Priority two is recreating the motor sensory experience, and that is in a stage so rudimentary that we're essentially limited to XYZ motion of virtual "hands" with very little interactive complexity even in the most advanced consumer VR products (HTC Vive). We can't mimic acceleration or control the sensations of our inner ear in a way that would truly convince us of a sense of "place." This is to say nothing of audio in a virtual world, which it turns out is not an easy problem to solve because all our damn ears are shaped differently. And, of course, we dare not speak of touch, smell, or taste - senses so unthinkably complex to artificially recreate convincingly that no one would hesitate to place them solely in the realm of science fiction.

But this is a post about Google Daydream more than it is VR in general, and before I get too far off on that tangent, let me just boil it down for you.

Even at the very bleeding edge of the best VR solutions on the market today, VR as an experience is still for all but a few enthusiasts what amounts to a digital amusement park ride. Think of it this way: roller coasters are an exhilarating, adrenaline-pumping experience for many of us, something we enjoy on average probably once every few years, or even less often for a typical person. Imagine riding the same handful of roller coasters three or four times a week for a month. Even if you could change the track layout, the special effects, or the speed, do you think the novelty would wear off? (And virtual reality, sir, is no roller coaster. It's more like a tilt-a-whirl, at best.) I enjoy doing some Oculus and HTC Vive demos once or twice a year at trade shows or events, but I have no desire to bring such a system into my home, let alone pay for the privilege. 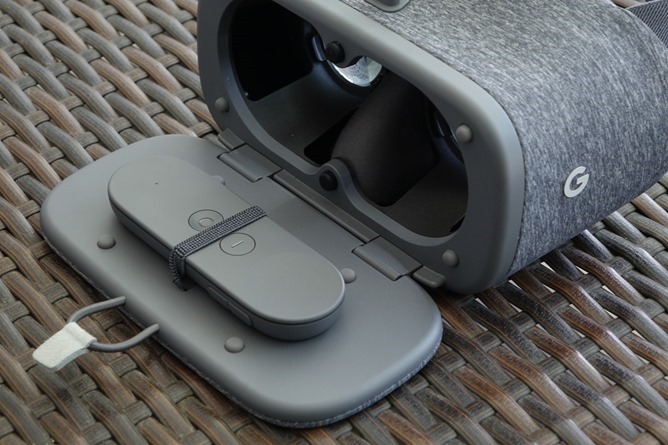 Daydream, like other mobile VR systems, is supposed to bridge the cost and complexity gap that makes systems like HTC Vive or Oculus Rift unpalatable to mainstream consumers. You use the phone you have with a cheap, wireless headset, and there's no technical manual needed. It's all about reducing the practical threshold to jumping in to VR. Of course, the visual and motor experience is measurably worse on these headsets, reducing immersion, and the content goes from the "tilt-a-whirl" level of PC VR to something more like a carousel.

Meanwhile, I have a wireless touchscreen portable computer that I can keep in my pocket and watch Netflix on wherever I want. When I'm at home, I can watch Netflix on my TV and keep my phone handy if I want to use it while I watch to look up something or, heaven forbid, do more than one thing at once. I don't want a "virtual personal theater" attached to my face - I don't get anything from that, and I lose out on a fair bit. And 360-degree video, the rare time I have any interest in it, works just fine on my phone or PC, thanks. Similarly, I don't want to play crappy, visually uninteresting games (or games shoehorned into VR because VR) with a controller that makes a Wiimote look like a power user product. I want to play games on my PC or game console where an excellent experience was designed from the ground up for those proven platforms and not for the sake of satisfying a technology novelty. And if I do want to play games on my phone, I'll probably play ones that allow me to multitask or step away for a moment versus trying to fully immerse myself in the experience(TM).

The sad truth is that virtual reality, for all its roller coaster promise, doesn't seem like an experience that will pull consumers away from the platforms and mediums it claims to improve upon and augment. At least, not for a long time yet. As such, even its future seems shaky.

But mobile VR's pokey carousel will definitely not pull consumers away from anything. It's simply nowhere near ready as anything but a technical demo, something to show friends and family as a party trick. It is not an experience that can stand on its own merits, and it is not something that the vast majority of people would be compelled to return to. Google Daydream, to date, has done essentially nothing to address this, because I don't think there's anything it can do on a practical level. These are very hard problems to solve. In fact, I feel a bit disappointed that Daydream is far more a "follow the crowd" product from Google than a genuine innovation or novel approach. It's a formula that's not shown success to date, and Google Daydream simply seems like a slightly-improved rehash, not the ground-up rethink it was pitched as.

No, Daydream feels much more like Google saw a trend and decided that it was in its best interest to, if a market for Android VR content existed, attempt to control and define it. Not to genuinely improve it. That's not the kind of motivation that leads to great products, and as a result, Daydream feels about as dead on arrival as the Nexus Q.

Play Movies & TV v3.22 switches to a dark theme and prepares to link with other streaming and ...