Last week was pretty busy with some big app updates and even bigger product announcements. One update that slipped through the cracks was Allo v6. There aren't any obvious new features, but there's plenty for a teardown. Some of the upcoming features will include a chat bot to enable voting among members of a group chat, Android Auto support, animated emoji, and some new drawing tools.

Wear notifications have been fixed 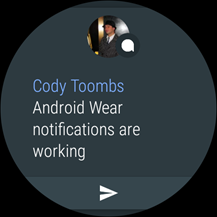 If you're in the (very small) cross section of people that actively use Allo and have an Android Wear watch strapped to your wrist most of the time, you may have noticed Allo notifications weren't vibrating when they hit your wrist. The issue was reported to Google a couple of weeks ago, and with the latest update, things are working as they should be. – Thanks, Michael Hungerford.

While we're on the subject of notifications on non-phone form factors, Allo will soon work with Android Auto. It should come as little surprise since Allo was the last of Google's primary messaging apps to lack integration.

So far, this doesn't seem to be operational, at least not when I tested it. However, the evidence is pretty straight forward. Auto support is denoted by a specific tag in an APK's manifest file, which in turn points to a file that specifies the capabilities an app requires.

If you look closely at the uses directive, you may wonder why only the notification feature is mentioned. Don't worry, this is the same level of access Hangouts has, and it allows for sending and receiving messages, so there's no reason to expect Allo to be crippled.

Of course, Allo's interaction model leans pretty far outside of purely text-based messaging. It's not really clear how well messages will translate through Google's speech synthesizer when they include emoji, stickers, pictures, audio, and whatever else users might send. I assume Google will prefer to homogenize most of those messages to simple text if at all possible.

Allo gained its second chat bot a few weeks ago, a plucky little image hunter called Lucky. On track to be Allo's third chat bot is a vote / polling tool, designed to bring a bit of the democratic process to your group discussions.

There's actually not much to say about this one, it appears to be a fairly standard voting machine where a user puts forth a set of options and everybody can place a vote. The options will of course have a counter for the number of times each was chosen. Like I said, pretty standard.

I couldn't find any name that would activate the voting bot, so I'm pretty sure it's not live yet. However, I don't see any obvious sign that there isn't enough code that Google couldn't enable this remotely, so it may go live at any time.

There's no point in denying it, Allo is meant for an audience that uses a lot of emoji, stickers, and gifs in conversation. That means there will naturally be quite a few features built around these things. Some new text suggests the next thing we're going to see builds on the existing emoji characters, and actually animates some of them if you shout the message.

Shouting, for those who may have forgotten, occurs when you hold on the send button and drag up to enlarge the text and emoji. The new part is that some emoji will be animated once they are maxed out. It's not really clear what will happen on systems that use different looking emoji. Nevertheless, this might not be at all useful, but it actually sounds pretty entertaining.

A true artist should never blame their tools; but there's always something to be said for using the right tool for the job. The pen tool in Allo is far from elegant, but it's plenty capable if all you want to do is draw some freeform circles or arrows in a picture. But there's a chance you'll need something a little more suited to the task, like a highlighter or a marker.

Again, this one is so simple it barely deserves an explanation. There are going to be two new tools joining the existing pen tool: highlighter and calligraphy. In case anybody isn't familiar with those terms, a highlighter is mostly transparent and serves to lightly paint an area to make it stand out from other text. A calligraphy pen is generally a marker with a shaped tip for embellishing hand-written letters. Like I said, very simple.