The mobile hotspot on your phone can be super useful, but it's also a little tedious to get it set up when you need it. There's a new feature rolling out as part of Google Play Services 10.2 that makes it much easier. It's essentially automatic with a feature called Instant Tethering. Not everyone will have it right away, though.

Instant Tethering links up devices that are associated with your Google account to make it easier to stay online when a connection drops. So, if one device loses connection, it can just ask if you want to tether to your other device—no additional setup necessary (uses Bluetooth to negotiate the connection). It even shows you the battery level of your other device. This makes the most sense with a tablet connecting to a phone, but it should theoretically work with any devices as long as one has a cellular connection. 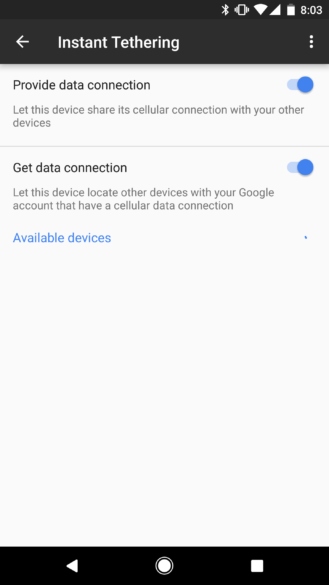 So, this is really cool, but don't get too excited. There appears to be a server-side component. The bits for Instant Tethering appear to be in Play Services 10.2, but I've tested several devices on 10.2 with no success. You can check to see if you've got Instant Tethering on your device by going to your main system settings and opening the Google menu. Instant Tethering should be listed there. There will be restrictions based on plan and carrier, of course. There may also be device limitations we aren't aware of yet.

We have a little more detail on how this feature will work and on which devices, courtesy of a Googler. Instant Tethering is rolling out first for Nexus and Pixel devices running Android Nougat 7.1.1. The Nexus 9 and Pixel C are supported only as clients—they can connect to your compatible phone, and this will work even on Marshmallow. Phones like the Pixel XL work as the hotspot side. However, two phones can also connect to each other with Instant Tethering if one of them loses its connection.

More devices should get support as the feature is tested. There is a server-side component to this feature, so you might not see it right away even after installing the new Play Services. Restarting might trigger it, though.

It looks like more users are starting to see the Instant Tethering option and the feature was announced by Omri Amarilio on the Pixel user community. Some of us here on the Android Police team have started to see it pop up on our devices, though I still don't have it on my Nexus 5X.

You can check the details of Instant Tethering, like how to set it up and which devices can be hosts and which can just use the shared connection, on this Pixel Support page. Thanks, Jan Mahler!