In all the years the Android Market and, later, the Google Play Store have existed, developers have never had the option to take a paid application and temporarily make it free of charge. Today, it appears Google is considering changing that, if a sale on the app Blaze and the Monster Machines is any indicator. Take a look - this app which is normally $3.99 on the Play Store has been temporarily reduced to the price of... no money. 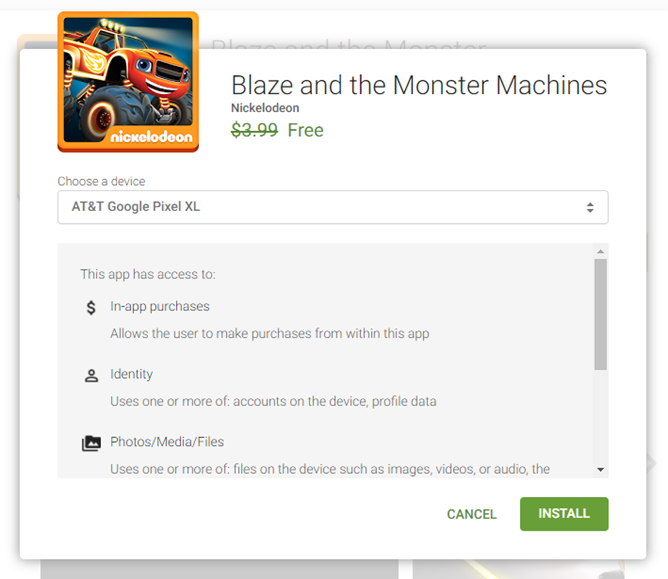 We have definitely not seen this before. Currently, developers can set paid apps to free, but the change is permanent - you can't go back to paid. If this is something Google plans to roll out more widely, this feature would let developers make a paid app free on a temporary basis, which would be a huge benefit for those who don't have a payment method linked to their Play Store account. It would also just be good because free.

We've reached out to Google asking for clarification of the scope of this test, and when or if it will be made more widely available to developers. It seems likely Google wanted to roll out this feature in tandem with another one we spotted today: apps showing their list prices side by side with the discounted one on the store. Without the original price beside it, you wouldn't be able to tell a paid app which is now free was paid before, obviously, so it would only make sense you'd need that new feature for this one to make sense to customers.

It's possible this feature has been created specifically for the weekly free education app Google has published for over a year now, and that it will never be given to other developers. The app where the feature appeared in the tip we were provided is an education app, but as far as we know, the weekly promo hasn't happened in some time, so it's not clear what's going on here, exactly. We have an inquiry out to Google, but it's possible this is a false alarm.