Some users signed up to the Google app beta channel have been receiving an unusual "alpha" release of v6.13 update. It's not entirely clear if this was meant to find its way into the wild, and judging by many inoperable and buggy issues, I suspect it wasn't. All the same, it's out and contains some pretty interesting things. To begin with, this version enables some features that had previously been seen in testing like a page of recent search topics and lite mode. There is also a process to add payment information for use with Google Assistant. Diving into a teardown brings back some previously seen features and adds a couple of new ones to the list.

Be careful about installing the apk 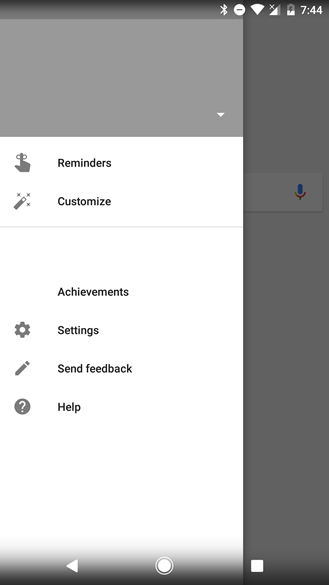 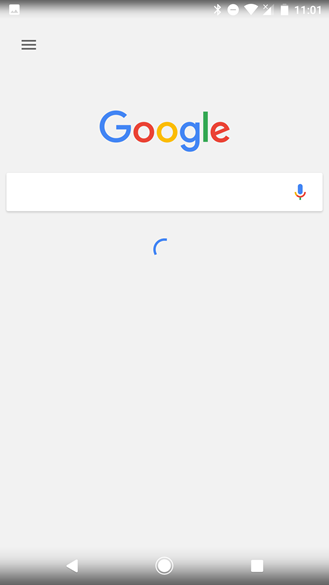 Before you rush to install this one, be warned that this version may cause unexpected and undesirable behavior. For example, I had pretty serious problems on my Pixel, including an obviously broken nav drawer (pictured above) and a feed that was empty and stuck on the refreshing animation. Meanwhile, everything seemed to work perfectly on my Nexus 6P. Even some of the features that are about to be covered outside of the teardown appear to be only partially operational. The point is, you probably don't actually want to install this yet, but it's there if you want to give it a shot.

Note: It seems these issues mostly clear up by tapping the search bar, then tapping the Back button or anywhere that will cancel out of the search. This works until the next reboot. – Thanks, Juan Diaz. 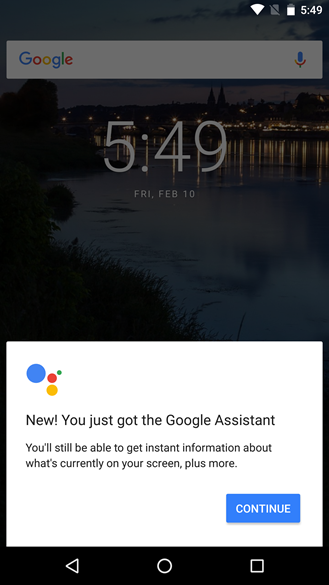 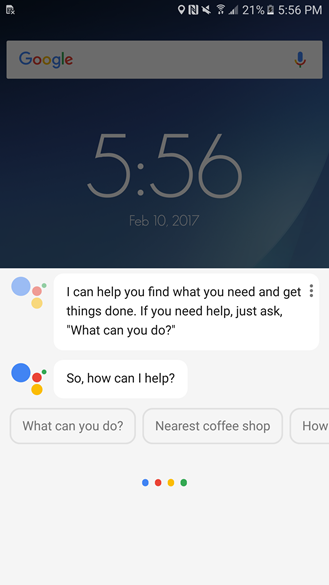 Of the people on our team that have tried this, about half of them are getting it to work, while the other half are still seeing Now on Tap. We're still not sure which factors control this, but it seems very likely to be tied to individual accounts. We've seen at least one Nexus 6P get Assistant with this method and one that didn't, so it's not tied to devices. There's a chance settings or other app versions may be contributing factors.

Be aware, this could mean plenty of things, not all of them have to do with Google Assistant coming to non-Pixels. This appears to be an alpha release and may have been intentionally configured to enable Google Assistant for testing purposes on the phones of Googlers that do not own / use Pixels. On the other hand, this could be the clear sign that Assistant will be rolling out to everybody when v6.13 becomes official (or maybe even beta). This would certainly be consistent with text from the teardowns. Regardless, there are explanations for any possibility, so don't rush to any assumptions yet.

Well, that didn't last too long. It's likely Google didn't intend to roll out Assistant functionality for non-Pixel phones yet (if at all). Anywhere from a few hours to a day later, Assistant functionality would disappear on most devices automatically. Since this article went live, it seems Google also remotely disabled the functionality, so it no longer works on phones after updating to v6.13.

This still doesn't say anything significant about the future of Google Assistant on all Android devices, only that Google has at least tested it to some extent. The teardown evidence is still the stronger indicator that more devices will get it eventually. As usual, we'll keep an eye out for more details.

If you think back to mid-December, you may remember an article about some features in testing. They were turning up in the Google app for a small group of users, but they were enabled remotely. It looks like the Offline Search capabilities have already been made live, but the Recent page and Lite mode are also showing up. Above is the tutorial / explanation for the Recent page, and below is its location in the nav drawer and a setting to allow users to turn it off or on if they desire. 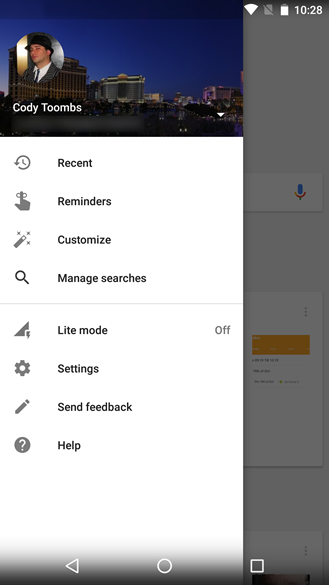 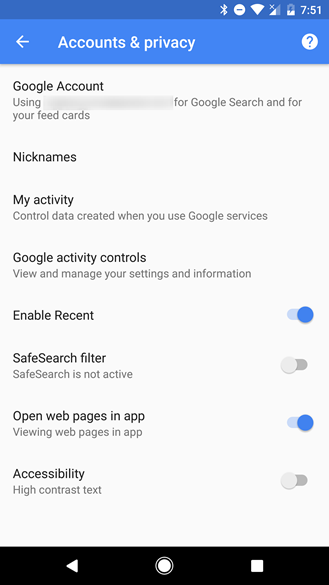 Then comes Lite mode, a fairly standard proxy mode tool that reformats web pages and images to consume less data and load more quickly. The status of Lite mode is shown in the nav drawer, but you have to enter the setting page to switch it on or off. This first turned up in a teardown back in October. 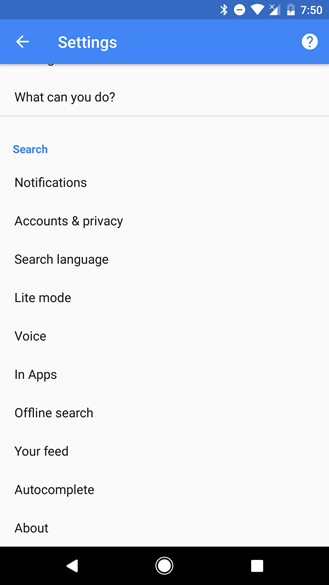 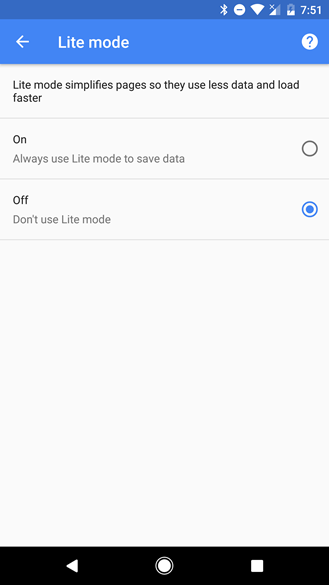 In my brief test, neither of these features actually worked for me in any obvious way. The Recent page seems to contain nothing more than the tutorial, regardless of how much searching I've done. I assume this is probably because Google has to enable each account to be able to collect and process data to be shown here, and mine hasn't been selected yet. 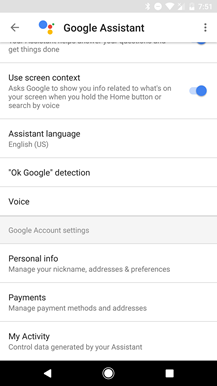 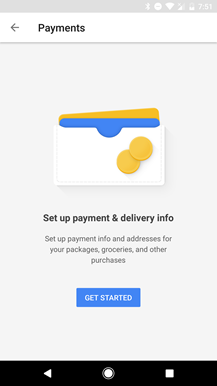 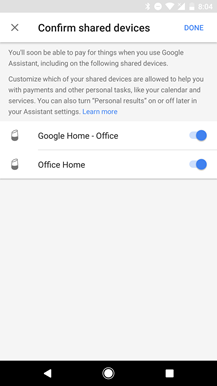 There is one feature that is definitely working in this update: setting up a payment method to use with Google assistant. But the catch is that there's probably nothing to do with it quite yet. Evidence that Google assistant would be able to make purchases on your behalf has been around for a long time, and Google confirmed it back in December, so this isn't much of a revelation. However, this is the first time the setup flow has been visible. To be fair, it's basically the screens you see above, plus a couple more for choosing one of your credit cards on file or adding a new one. 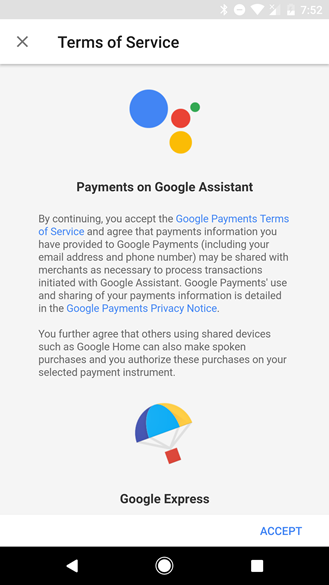 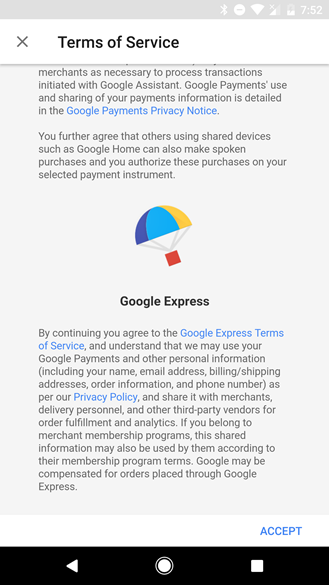 However, there is an interesting detail in the terms of service screen: it explicitly includes a section for Google Express, Google's localized shopping and delivery service. While it's not inherently surprising this would become a service available for use with Google Home and other Assistant-enabled devices, it's a little surprising to see it mentioned so prominently.

Most of us already assume Google Assistant will appear on more phones at some point. It couldn't remain an exclusive forever. Now there are a few new strings that leave little room to doubt that. A series of tips and upgrade notes have been added that will inform users that their "Android phone just got better" because they can now "try the Google Assistant" by holding down the home button.

It's obvious from the phrasing that this is intended for devices that didn't have Google Assistant previously. That could mean Assistant is only destined for Nexus devices, but it's far more likely Google is planning to replace the old voice assistant with the new one. This actually leads into the next topic.

Some people would like a different way to launch the Google Assistant. Most of us probably rely on a long-press of the Home button or have our phones set to always listen. There are still some people that would prefer to have an icon on the home screen or may even use automation tools like Tasker to launch it. Well, that's about to happen.

The proof is pretty simple, there's a new image that obviously matches Google's new theme of rounded launcher icons, and a string with the subtitle text for the homescreen. 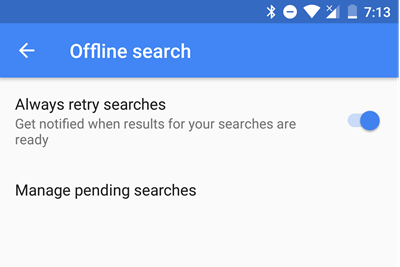 Offline search became widely available to users last month. It's a pretty neat idea and makes sense, but it seems like an unfinished solution. Sure, you can get search results when you pass into an area with suitable connectivity, but that doesn't really help if you go back out of service without checking on your search results and loading the next page. Now it's time for Google to solve that oversight.

A new behavior is going to be added to offline search that sets a device to not only download search results when connectivity is bad, it will also be able to dig into some of the top results and download the first pages, as well.

The lines above represent an option to switch this feature on or off, so you don't have to use this if you don't want to. However, the benefits are pretty obvious if you're regularly stuck in dead zones..

And the final section is something of a follow-up. Back in January, a few new lines of text strongly suggested Google Assistant will add support for keyboard input where there had only been voice input before. There wasn't much doubt about this to begin with, but some recent additions reinforce this one, making it a certainty in the future.

The new additions represent a setting that allows users to pick their preferred default mode: voice input or text entry.

That's about it for now, but keep an eye out for some of these things to appear when a beta or stable release lands.

Google Store stops selling the Nixon The Mission smartwatch and the Philips Hue Color A19 ...