Twitch has proven to be a pretty popular platform among gamers for streaming live footage and gameplay. However, something often berated about is the lack of a way to find great streams. Today the company is attempting to fix that, with the beta release of Communities to its platform.

A Community on Twitch seems similar to groups on other social media networks. They are grouped by category, either for a type of gameplay - racing, for example, or platformers - or an interest, such as crocheting or painting. There are also game-specific Communities, like one for Minecraft, and another for Counter Strike. If you're a streamer, these will help connect you with an audience who recognizes and understands what is being streamed. If you're a viewer, it'll help you find something great to watch that you like. If you can't find a community for your genre, interest or game, create one; it's (apparently) that easy. 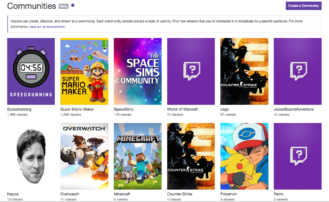 A screenshot of Twitch Communities on desktop.

As the new feature is in beta, it's not quite finished, and is still being tweaked. Feedback can be submitted via either Product Forum, or Twitch Curse server for a more in-depth chat. Twitch says that feedback will be taken into account when improving and building Communities, which is always good to see.

Sadly, Communities are not yet available in the Android app (or, for that matter, the iOS app), but Twitch says they'll be supported "soon." Otherwise, things seem to be in order; check out the source link for a more comprehensive look, and an FAQ section too.

Motorola announces the "Transform the Smartphone Challenge" finalists, now up on Indiegogo to ...