Heroes is free, but it is the classic "freemium" model that we see all too often in the mobile gaming space. Fire Emblem as a whole translates very well to the mobile screen, but this particular entry has an element of grinding that is entirely new to the series. However, there are still many good things to the game. Fans, recent and old, will feel right at home with the gameplay and some (if not most) of the characters. New players will find Heroes easy to pick and enjoy for a while.

The best way to describe any Fire Emblem game is that it's like an elaborate combination of chess and rock-paper-scissors. Here's what I mean — you have a team of four characters, each with their own weapons, skills, and strengths/weaknesses. Each unit can only move a certain amount of squares. Where things get tactical is when you start fighting enemies. When playing any Fire Emblem title, there is a battle triangle to keep in mind: sword (red) beats axe, axe (green) beats lance, lance (blue) beats sword, but this time the color coding makes it a bit easier to remember. In addition to that, characters with ranged attacks (archers and mages) have the advantage over flying units and those with lances are best pitted against mounted enemies. 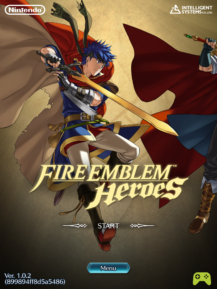 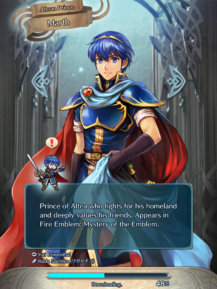 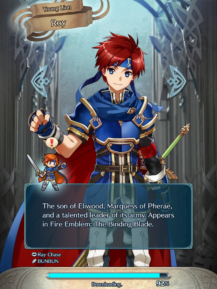 Positioning your units and sending them against the right enemies is crucial, as well as pulling them back if things go awry. While that is important in any tactical strategy game, this particular habit will be ingrained in Fire Emblem veterans. In previous titles, when a character would die, he or she was dead for the rest of the playthrough. Luckily, Heroes does not have this mechanic. Fallen units can be revived with either an item called Light's Blessing or the in-game currency, called Orbs. They will also return to full health upon completing each encounter.

Now that we have gotten through that explanation, let me point out that Heroes is the simplest Fire Emblem yet. It is easy to pick up and learn; the first levels are meant for you to play around and figure out how the game works. The smaller 8x6 battlefields and quick battle sequences make for some speedy gameplay, too. 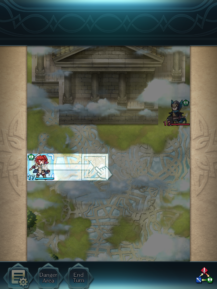 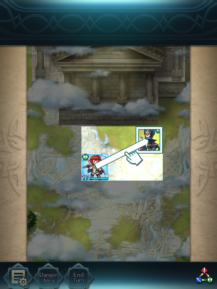 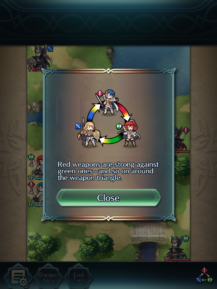 Each mission requires the use of stamina, the energy system that limits how many rounds you can play until either the timer gives you more or you pony up the Orbs/cash. You have fifty total and each mission only costs two stamina at first, but as you get further along into the addicting gameplay, the requirements get higher. Towards Chapters 6 and 7, my game time was severely limited due to the increasing number of units required. This is by no means a new concept, but it is quite annoying to see in Fire Emblem.

For the sake of spoilers and brevity, I will not go into the story too much. What makes this game a fan's dream is that it includes heroes (get it?) from many past games, such as fan favorites Ike, Marth, and Roy. Each hero's world is connected via portals, which the antagonist uses to enslave the various characters to her will. You control a group of rebels who travel to each realm and free those heroes. It made for some interesting nostalgia as I fought against Chrom, Camilla, or Xander. 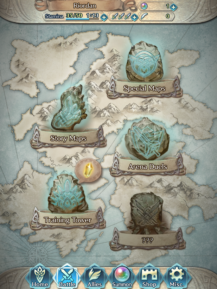 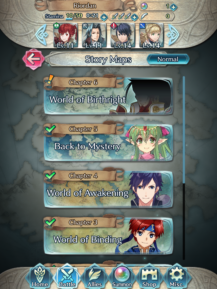 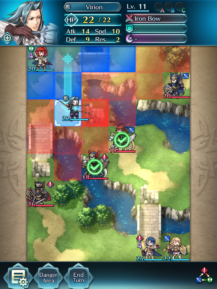 There is definitely an element of grinding to this game. I reached a point where my characters were not strong enough to take on the enemies in each encounter without exhausting my supply of Orbs. There is a training area with different levels of difficulty that can not only provide the experience to your units that they would receive normally in battle, but also shards and crystals to level them up outside of combat. This becomes tedious and frustrating, and training levels also require stamina.

PvP (player vs. player) exists in the form of a dueling arena. Instead of stamina, this requires you to use Dueling Swords (another finite resource that requires Orbs to replenish). You can pit your best teams against other players to see who comes out on top. 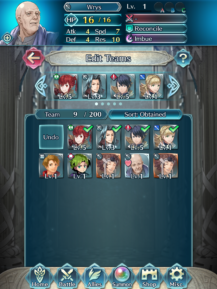 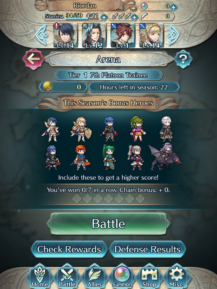 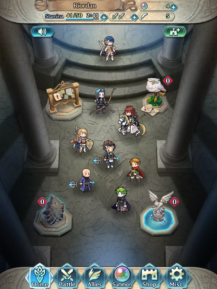 Finally, there are multiple challenges to complete in order to earn rewards, like in-game items and Orbs. These range from logging in to defeating certain levels under specific circumstances. You access these rewards from the "Home" section, which is also where some of your characters linger. Here you can also develop relationships with them, which can provide certain bonuses. 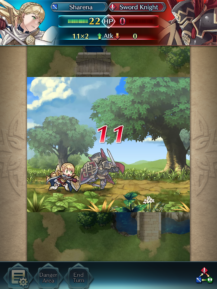 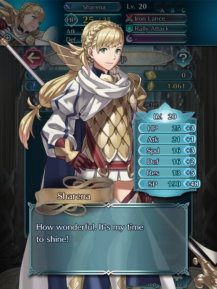 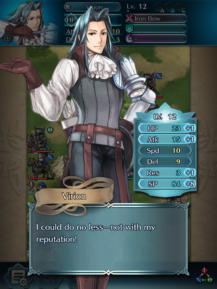 Sharena and Virion are amazing

The graphics of Heroes are simple, yet effective. Battlefields and sequences represent each unit as a "chibi" (a cute little sprite), but every one has a hand drawn model that appears during dialogue and other points in the game. If you have played Awakening or Fates on the 3DS, then this style of things will feel familiar to you. As far as level design, the fields, forests, castles, and lava playing areas really meld into each other; not a single one thus far stands out to me to me as unique. That is usually how Fire Emblem goes — the focus is on combat and strategy, not looking at the scenery.

I found the game's overall sound to be very good, although the background music and limited voice-acted lines do begin to grate on your ears after a while. Some of the levels feature parts of the soundtracks from the older games, which is a fantastic touch for long-time fans, but even that gets old after extended gameplay. The sound effects during battle sequences are quite satisfying, especially when one of your characters inflicts a ridiculous amount of damage on an enemy. The visceral sound when their weapons connect is just great. Heroes doesn't break any ground here, but it gets the job done. 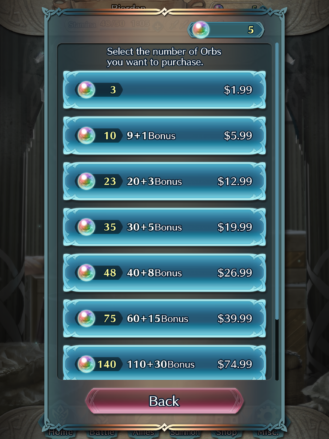 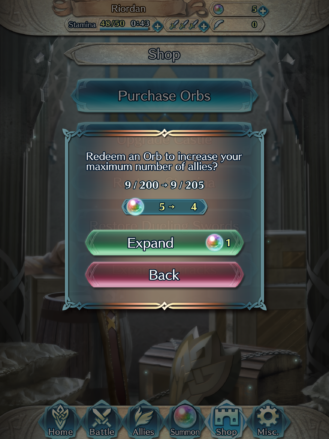 Orbs are used for a lottery system to summon new heroes, restore stamina and Dueling Swords, revive fallen characters in combat, upgrade your castle (for EXP bonuses and whatnot), and expand the number of heroes you can summon (you start at 200, and an upgrade of five costs one Orb).

You get one for completing each mission, but you can buy more. Things start at 3 Orbs for $1.99 to 140 for $74.99, which is quite ridiculous. Heroes' business model feels similar to Clash of Clans' — you can complete the game without spending a cent, but it's very slow-going and tedious. Each hero can be leveled up via the Training Tower, but it can get pretty monotonous... especially when you run out of stamina. 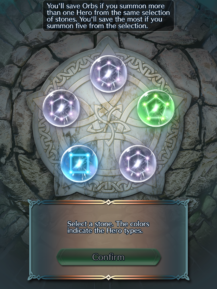 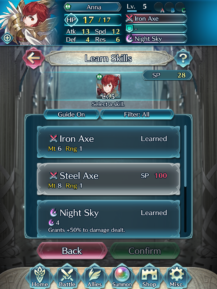 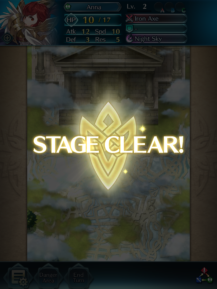 If you like tactical strategy or even anime-styled games, then I definitely recommend that you play Fire Emblem Heroes. It is a fantastic game, though it is certainly not my favorite in the series (Path of Radiance, for the win). It follows along with what makes the series great, but adapts it for the smaller screen and speed of mobile gaming. The story is fine, but the nostalgia is what made it fun for me. And even though I am a long-time fan, it is welcoming to newcomers, too.

The "freemium" model and grindy element are both real downers. I would have been much happier to pay $4.99-$6.99 for a game without microtransactions, but there is nothing to do now. I should have expected no less from Nintendo, so shame on me. But the zero cost to entry makes it even easier for me to recommend this game. Sure, you can buy your way through or just work through the tedious moments, but you should definitely check out Heroes if you need a fun, speedy tactical time-killer.

Google Cloud Search is the latest addition to the G Suite, brings the power of search to ...