The tech market is getting competitive these days, and smartphone manufacturers that aren't named Apple or Samsung must price their products aggressively to survive. Motorola didn't seem to get that memo when it launched the unlocked Moto Z with an MSRP of $699.99, but with this latest discount, it appears that the company has seen the light. For a limited time, B&H is offering the Moto Z in unlocked guise with a bunch of freebies for just $449.99 - that's $250 off retail, for those of you who aren't math people.

The Moto Z features a 5.5-inch 1440p AMOLED display, a Snapdragon 820, 4GB of RAM, 64GB of internal storage and a microSD slot, a 13MP rear camera, a 5MP front-facing camera, and a 2600mAh battery. It packs all this, plus a quick fingerprint sensor and support for Moto Mods, into a svelte 5.2mm-thick body. It is worth noting that there's no headphone jack, though.

$449.99 for a phone with these specifications is already a pretty solid deal, but B&H is also throwing in a bunch of free stuff: a $25 B&H e-gift card, a VR headset, as well as a "Smartphone Photo Bundle" that includes a 32GB class 10 SanDisk microSD card, a mobile LED light, a smartphone mount, a tripod, and a microfiber cleaning cloth. (If you aren't a fan of free things for whatever reason, Amazon also has the phone listed at $449.99. Its bundles with the Hasselblad camera mod and the Insta-Share Projector have also fallen to all-time low prices.)

If you're interested, act quickly; B&H's deal will expire at 11:59PM EST tonight (February 6th). We wouldn't expect Amazon's deal to last much longer. Hit the source links to see the retailers' listings. 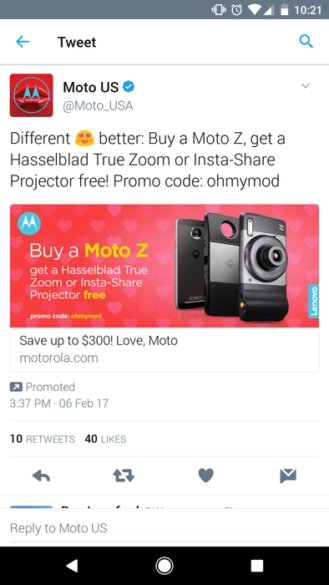 For those of you who are interested in the Hasselblad and Insta-Share Projector Moto Mods, Motorola themselves are offering one for free if you purchase the Moto Z from them with promo code "ohmymod" (real clever). Unfortunately, Moto is still selling them for $699.99 a pop, so it's not as good of a deal as it might seem at first. However, it's still pretty solid if you were going to purchase one of the aforementioned Mods anyway.

Optimum shows it is clueless about Android in a single tweet