A couple of weeks ago, Cody found interesting strings in his teardown of v7.4 of the Play Store that hinted at an update or complete overhaul of the My Apps screen. Today we have our first glimpse of what that new design looks like, thanks to a tipster who has it on his device.

Like Cody's teardown revealed, the new layout has different sorting methods and string names for when the app was last updated or used. But with the screenshots below, we can fully understand how the code translates into a usable UI.

Instead of the Installed and All tabs you see now for apps you have on your device and all apps you've ever downloaded from the Play Store, respectively, there's a new separate tab for Updates. This is where you can see all the apps that need an update, as well as the size of said update and the date the update was actually published. You can still install updates separately or in a batch. 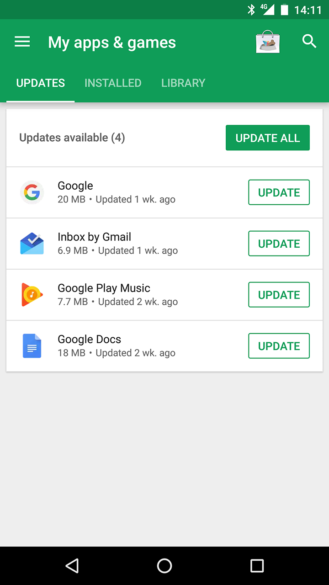 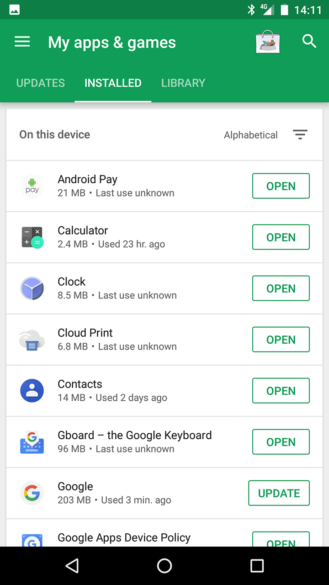 The Installed tab shows the list of apps installed on your device with a few notable changes. First, there's the sorting method to list the apps alphabetically, by size, by last update time, and by last used time. The apps themselves have new Open icons that let you immediately launch them instead of first viewing their Play Store listing page to get the Open icon. Also new is the complete app size; for example, the Google app shows 203MB in the Installed tab, but 20MB for its update size in the Updates tab. And finally there's also the last used timestamp, in minutes, hours, days, or unknown.

I still have so many questions regarding this new UI, like where the beta apps are now (maybe the user here hasn't signed for any betas and the tab will show if you participate in betas), (edit: it's just a dogfood icon), and whether you also have lists of apps installed on other devices aside from "On this device" in the Installed tab.

We have only received one tip about this new layout so far, so it seems to be a very limited server-side roll-out. Let us know if you're seeing it as well and, in case you do, help us shed some light on the questions I asked above.

[Facepalm, Shrug] WhatsApp adds plenty of new emojis from Android 7.1 including professions and ...