Google currently has two launcher apps in the Play Store; Google Now Launcher and Pixel Launcher. In a few months, there will only be one. According to an email forwarded to us by a tipster, Google has alerted GMS partners of its intention to remove Google Now Launcher from the Play Store in the coming weeks. OEMs that use GNL have options, though.

The email (which you can see below) explains that the Search Launcher Services library for OEMs that has been in testing is now available. That's what Sony used to integrate the Google Now panel (now just the Google Feed) into its stock launcher a while back. That means OEMs can slap the Google Now panel on whatever launcher they want. Some device makers have been shipping with GNL, including Motorola and Nexus devices. Google says they can just grab Launcher3 from AOSP and add the search services, or build a new launcher. It's unclear what, if anything, Google will do for Nexus devices. 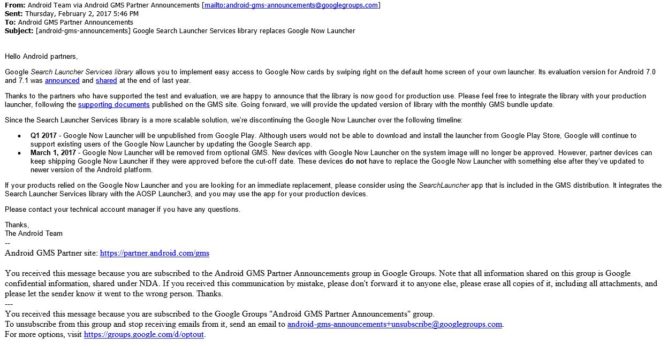 Google plans to remove GNL from the optional GMS package on March 1st, meaning no devices with the launcher pre-installed will be approved after that. Existing devices can continue using GNL, though. It will technically still be updated via the Google app. However, the listing will go away by the end Q1 2017 (i.e. now-ish). That affects people who just installed GNL on their devices from the store. You can keep using it, but don't expect any major improvements. It would be nice if this meant the Pixel Launcher was going to be opened up to other phones, but I'm not holding my breath.