An alarming report was circulating the internet earlier today claiming that Google had stopped production of the Pixel and Pixel XL. Yeah, it didn't make a lot of sense, and indeed it appears to be incorrect. Google has confirmed the Pixel is still in production. You can put your pitchforks down now.

The great Pixel scare of 2017 was kicked off by Canadian carrier Telus, which sent out notification emails to people who had pre-ordered the Pixel XL through the carrier. In the email, Telus said it was not getting any more Pixels because Google had ended production. Just on the face of it that sounds bonkers. The Pixel has been sold out repeatedly since it launched. By all accounts, Google is seeing a lot of interest in the phones. There's no reason to end production now. Here's the email, many copies of which have been posted on Reddit. 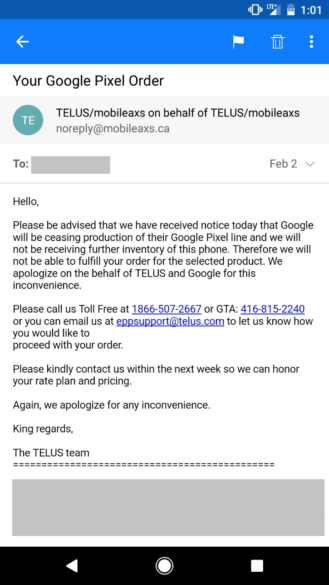 9to5Google got a statement from Google about the matter, which you can read below.

We’re really excited by the demand for the Pixel XL in Canada. Telus is currently out of stock of the Pixel XL. We’re working with our partners to restock inventory across our retail channels and we can confirm that production of the Pixel has not stopped.

So, apparently nothing in the Telus email is true. Google is still making the Pixel and it plans to restock it across all retail channels. It's unclear why Telus sent out the email at all or what it based the information on. At any rate, the Pixel lives.