Shazam is one of the oldest and most popular song recognition services. Although I personally have long since ditched it for the recognition software built into Google Search, it's still used by hundreds of millions of people each month (well, that's what Shazam says, anyway). The app's latest update adds the app shortcuts that Android Nougat brought support for. 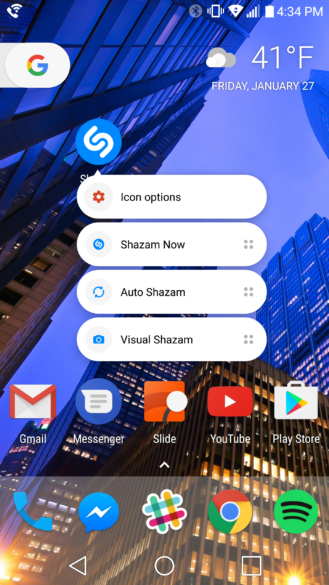 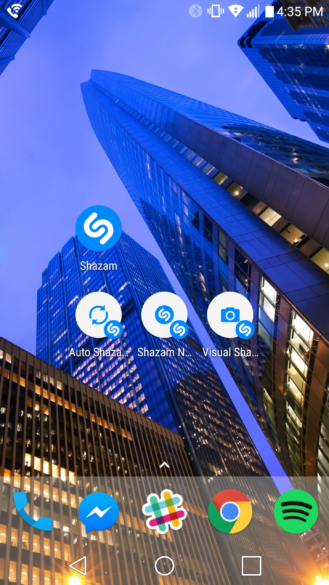 The three app shortcuts are "Shazam Now," "Auto Shazam," and "Visual Shazam." Shazam Now is what people will presumably use most often, as it simply initiates a Shazam music search. Auto Shazam turns Shazam's auto-search on; however, you have to go into the app to turn it off. Lastly, Visual Shazam enables you to scan "Shazam Codes" that are supposedly on products, magazines, and billboards, but they're obviously not very widespread.

Now you can scan Shazam Codes with your camera. Codes? What?! Tap the camera icon on your Shazam home screen to learn more!
Android Nougat user? Just press firmly on the Shazam app icon, and you’ll have a shortcut to start Shazaming immediately—so you can now name that tune in one less tap
Don’t forget to keep your Shazams safe and in sync between your devices. Simply create an account and we’ll back up your Shazams so you’ll never lose them.
(Shazam codes aren't new.)

As with all app shortcuts, you can also pull them out into their own separate entries. You'll need a device running Android 7.1 Nougat or a launcher that supports them (like Nova Launcher, pictured here). Shazam away!

Friday app and game sales: Fenix for Twitter, In Between, WiFi Mouse Pro, and more