Hangouts v16 began rolling out earlier this week, followed this morning by an updated changelog that speaks of making it "easier to find the right contacts quickly" and the obligatory bug fixes and performance improvements. There aren't any major changes, but the contact list and search results are organized differently. Additionally, an old part of the interface has been removed.

Contacts has left the drawer 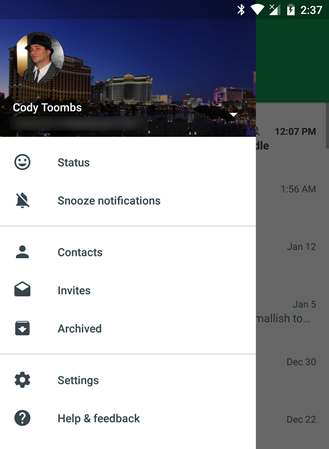 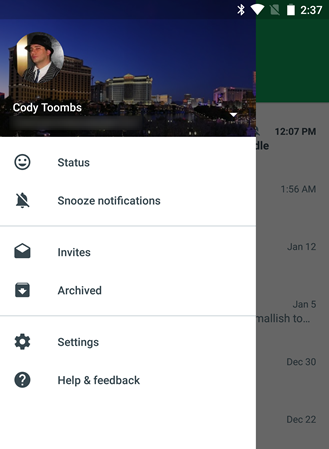 If you're just poking around, the one obvious change in v16 is the loss of the Contacts button in the nav drawer. This might sound like a big deal, but both the button and the screen it opened had been made a bit redundant after v14 made some revisions in the setup of chats. The Hangouts team is probably cleaning up loose ends after giving the new interface a little bit of time to make sure it was working out.

The reorganizations didn't stop with the nav drawer, there are also some adjustments to the contact list and the results returned from searching it. To put it simply, Hangouts now groups contacts a bit differently. The official changelog says it's easier to find contacts with these changes.

In v15, Hangouts kept the main contact list in two groups: Frequent and Your Contacts. Each contact in the Frequent list also appeared in Your Contacts. With the update to v16, the list is now broken into three groups: Frequent, On Hangouts, and Not on Hangouts. The names are self-explanatory. With the updated lists, there are also no duplicates between lists, meaning you won't find contacts from the Frequent group also appearing in the On Hangouts group. 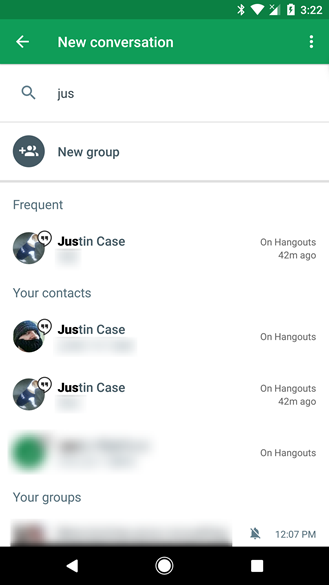 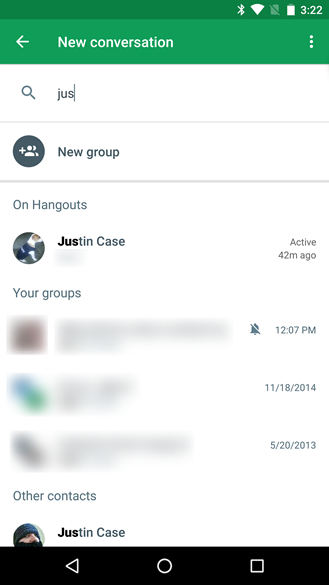 The organization changes when the search field is in use. Previous versions broke results into three primary groups: Frequent, Your contacts, and Your Groups – plus an extra expandable group titled Other people on Google. The latest version replaces the Frequent group with one titled On Hangouts and completely does away with the group titled Your contacts. The list of group chats has also been moved up in priority so that it appears immediately after On Hangouts.

It's a good thing some attention is being paid to the organization of contacts, especially for users that have thousands of entries, but it's hard to judge whether these particular changes are making it any "easier" to find the people we're looking for. It may be the Hangouts team is just getting started and may put some other variations into future releases.