I have to confess, despite being fairly well-rounded in all aspects of geeky culture, I'm clueless when it comes to One Piece. There's a stretchy guy and another dude who likes to eat his sword and a woman who can never seem to find her shirt and some kind of tiny moose-bear, and everybody wants this weird fruit. Or maybe treasure. Oh, and there are pirates! Whatever's actually happening in the anime, you can now relive your favorite stretchy-sword-bikini-fruity-pirate-moose moments in Namco Bandai's latest Android game, Thousand Storm.

Cynical One Piece fans might be expecting yet another licensed card game, as that seems to be the favored format for these kinds of tie-in titles. That's not quite the case here. Though Thousand Storm is decidedly more "casual" than some of the One Piece console games that have been published, and the portrait-only, one-finger format is designed to be easy to handle without too much twitching or button-pressing, there is real-time combat in 3D environments. Players collect and power up the stars of the series (which do, to be fair, come in presentations that are kind of card-like), eventually facing off against the show's biggest antagonists. Combat is sort of like a MOBA without movement: attacks and special powers are on timers that need to be manually activated. 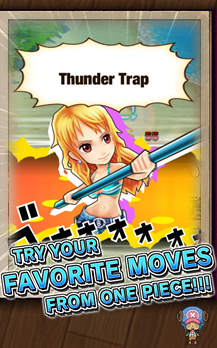 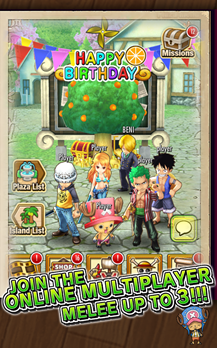 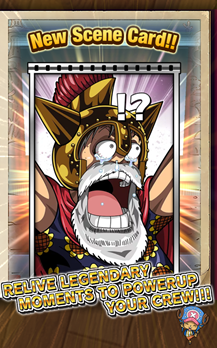 What fans will probably like most is the cooperative online play, where up to three players on a team can duke it out in live battles. Unfortunately, the online play seems to be the biggest problem in the game so far: the reviews posted to the new English version of the game are filled with complaints of lag and connection issues, quickly dragging the score down to a mediocre 3.4. Load times are also quite long - like, "I can't tell if the game has crashed or not" long. Thousand Storm is free, with in-app currency used for "scenes" that can unlock new characters and upgraded powers. IAP goes up to $45 - not great, but at least a little better than the usual $100 bull. 'Lucky' is Allo's first chat bot (besides Assistant), tries to guess what GIF you want