Giphy released its official Android app in April of last year, but it had one caveat. You couldn't easily save the GIFs to your device (there were workarounds, but not ones regular users would know), you could only share them to other apps. This meant you had to know where exactly you wanted to use that GIF in order to benefit most from the app and you couldn't just browse, grab any GIFs you like, and keep them on the off-chance you'll need them later. It also meant that GIPHY had a lot of trouble sharing its GIFs properly to many apps like Hangouts, Messenger, WhatsApp, Facebook, and so on...

The obvious solution, which the app is implementing nine months later, is to let users download GIFs. Simple. With the files saved to your phone, you can then insert them in any app that supports GIFs without relying on Giphy's fickle sharing mechanism, and you can use them now or later and re-use them as much as you want.

Scratch all of that. As pointed out by commenters, Giphy did let you download GIFs by long pressing on the image. But it looks like so many users didn't intuitively find the option that a dedicated Download button had to be added. 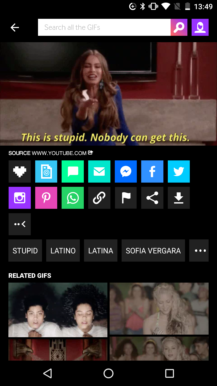 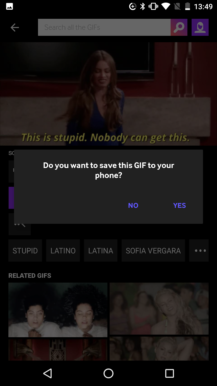 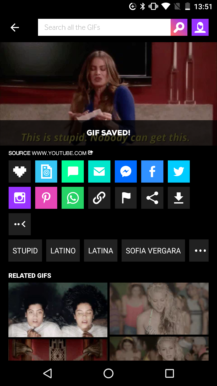 To see the Download button, you'll have to expand the sharing options (tap the 3-dot icon after Facebook). After tapping to download, Giphy will make sure you want to save the GIF to your device and then show a little "GIF saved" animation. GIFs are saved under Pictures > Giphy on your local storage so that's where you should look for them.

This update also brings performance improvements and lesser data consumption. Here's the changelog followed by the link to grab Giphy on the Play Store. 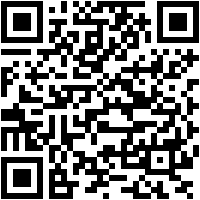