Modern routers can do some cool things, especially if you're using the new Google WiFi mesh routers. They can cover your home in a healthy glow of electromagnetic waves, intelligently connect to devices, and keep track of your data usage. However, linking Google WiFi with an OnHub can result in some weird data usage stats. Google now says it's aware of the issue and is working on a fix.

Our fearless leader encountered this issue some weeks ago, and posted some details on Google+. The gist is that the Google WiFi app is somehow miscounting some of the data traffic in these mixed networks. Artem saw over 4TB of usage (which did not add up to the displayed total) during a period in which his ISP only reported 1.4TB. It's in the ISP's interest to know these things. So, it's probably the total that's right and not the individual device counts. 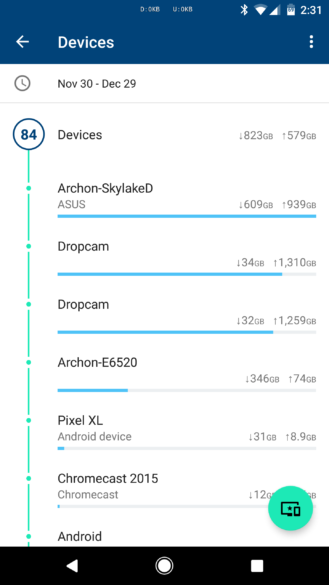 We reached out to Google, and have now gotten an official response.

After speaking with a specialist it looks like this is a known issue and we are currently working on a fix. Once this has been resolved, we will reach out to you via email with more details on the resolution.

So, there should be an update to Google WiFi, the OnHub, or both that will fix this issue. Google didn't provide a timeline, though.

Cryptomator takes a stab at securing your cloud files with transparent, client-side encryption