A new version of Android Pay is headed out to users. Like many other updates, this one doesn't seem to have much in the way of new features poking out from the surface of the app. However, a teardown of the APK gives us a couple of things to look forward to in the near future. Android Pay will soon enable the use of PayPal cards and it looks like we're getting close to the previously announced support of Visa Checkout. If you'd like to pick up the latest version ahead of the regular rollout schedule, hit the link at the bottom of the page. 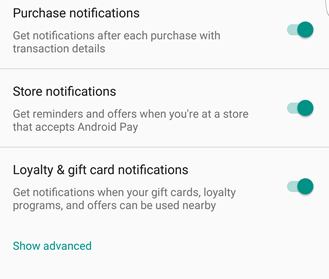 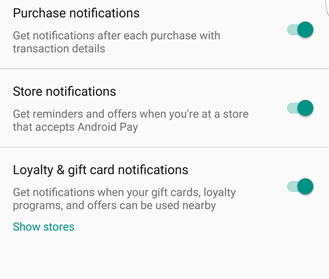 It's a very small thing, but I thought I'd point it out for kicks. The "Show advanced" button in Settings has been renamed to "Show stores." The label never made a lick of sense before, so this is at least a logical change. There's no functional change, tapping on the label still reveals a list of stores with toggles so they can be turned off individually.

That's all we've seen for changes, but there may be a couple others buried in odd places. Let us know in the comments if anything else pops up.

Android Pay has been making pretty good progress with supporting new banks, card types, and even a few countries, but there's still a long way to go and some very popular names are still missing from the list. Now it looks like one of the Internet's best-known names in payments will be joining the ranks soon: PayPal.

Historically, PayPal has had to go through some slightly unusual measures to have its cards accepted at brick & mortar locations. Most notably was a deal established with Discover back in 2012 that allowed transactions with PayPal cards to be routed over Discover's network. In a more recent deal, announced just 9 days ago, PayPal and Discover are building on their prior work to allow Discover cards to be accepted at PayPal terminals – basically returning the favor from the original deal. The other component of the agreement gives PayPal access to Discover's token service, which means it will allow PayPal users to use contactless terminals that support Discover.

Now to the important part. Android Pay will begin supporting PayPal, and Discover will be generating the virtual account numbers to make it work. I know, quite the lead-up for such a simple result, but it all goes into explaining the strings below.

As you can see, the string names all mention PayPal, but most of the on-screen content mentions Discover. That's why the explanation above was necessary. Naturally, contactless terminals will still have to support Discover in order to use a PayPal card, even with Android Pay as a part of the equation.

I'm not familiar enough with PayPal's card offerings to be sure, but it looks like there may have been at least 2-3 different cards available. The only safe bet is that if a card would have previously worked wherever Discover was accepted, it should continue to work with Android Pay. I believe that covers every card I can find, with the possible exception of the PayPal Access Card, which may or may not be supported.

It seems that even if Bancorp (the provider of PayPal's cards) is dragging its heels joining the roster of Android Pay banks, PayPal is happy to look for another way around, and I doubt that's going to bother any of its cardholders.

Let's switch gears to another Internet payment system: Visa Checkout. If you're not already familiar with it, this is Visa's secure online system for making payments without providing a card number directly to websites. Basically, it's a competitor to the part of PayPal most people actually want to use.

Readers may remember Google announced a partnership with Visa Checkout and MasterPass back in October, promising that the two services would be operational in early 2017. Only about three weeks in and it looks like things are underway... At least for Visa Checkout, that is. There's no sign of MasterPass yet.

Android Pay and Visa Checkout together might seem a little redundant since they're both primarily intended to get away from using raw credit card numbers and use single-use payment tokens, but the announcement points out that they will benefit from each other. Basically, Visa Checkout will be responsible for the payments while Android Pay provides personal information (if necessary) and device security.