A new version of Google Photos hit late yesterday, bringing the current version to 2.7. At first glance, it's hard not to notice there are fewer items in the navigation drawer, but not much else seems to have changed for regular use of the app. Digging a bit deeper reveals a neat Easter egg that's all about the love, and a hint that Photos will soon allow users to edit the timestamp on a photo. As usual, you can hit the download link at the bottom to get the latest version if it hasn't already rolled out to your device.

Cleanup on the nav drawer 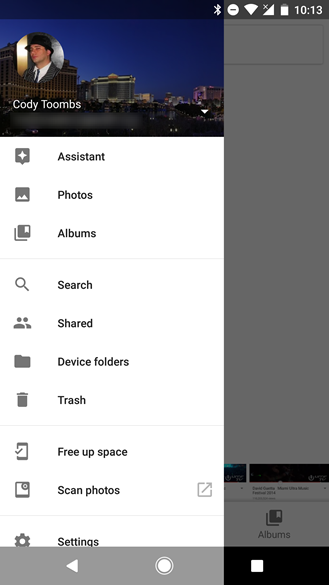 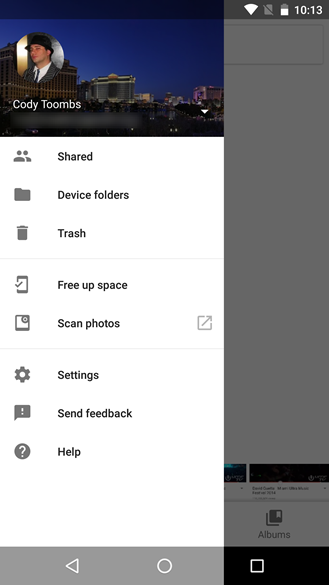 This one was bound to happen eventually. The nav drawer has four fewer items on it, which should make the list short enough to fit on the screen without scrolling on even most smaller phones.

Missing from the line-up are the three from the first grouping: Assistant, Photos, and Albums, which unsurprisingly match up with the three buttons on the bottom nav bar, which was introduced early last year. Also gone is the Search item, which can also be found by tapping on... You guessed it: the search bar.

Most people probably won't miss the removed shortcuts since there are faster ways to reach them. At this point, they were really just cluttering up the drawer.

Note: These options were also removed for some users in the previous version through a server-side switch. This version appears to make the change universal for everybody.

Software developers enjoy a long tradition of hiding Easter eggs in their software. The Photos team joins the list with a little flying mascot of its own. To get things rolling, just type "I love Google Photos" into the search bar. Be sure the letters match exactly, including the letter casing, or it won't work.

Once the phrase is in, out comes a little jet-propelled Android with the Photos logo emblazoned on the front. It'll fly around for a few seconds before leaving the screen. You can see it in action with the video above.

New editing features are added to Google Photos about every third or fourth update. Popular changes have included an updated set of filters, tweaks to the cropping interface, and different controls for adjusting colors. However, while images can be modified, there haven't really been any options for working with their metadata, more accurately known as EXIF data.

Now it looks like the Photos team is going to allow users to make adjustments to one of the EXIF fields. New text and layouts indicate that the timestamp will become editable, allowing users to alter the date and time pictures were reportedly taken.

<string name="photos_mediadetails_details_edit_datetime_icon_content_description">Edit icon to allow the user to edit the date/time of the media.</string>

The capability to modify timestamps is already available in the Photos web interface, so this will just bring a little more feature parity to the Android app. Some users have reported issues with photos importing with the wrong dates, so this may be helpful for them. However, I suspect the real reason this is happening is to give Photoscan users a way to adjust dates after they're done importing old print photos.

Now that the Photos team is breaking the ice with modifying EXIF data, can we please agree that editing and removing location data should be next? I hate going to another app just to throw out location data before sending an image somewhere. Yes, I know it's technically possible to disable location data on photos in shared albums, but that's clearly not the way most people need it. Just my two cents...

[Freebie, but hurry] Android Game Programming by Example is free from Packt