File storage and home servers are getting more and more popular these days, with people getting wary about what companies such as Google and Apple are privy too. In light of this, Drobo has launched a new Android app for photo storage, named DroboPix, prompted by "high customer demand" after the iOS release last year.

The app seems to be much like other network storage solutions, such as Synology - photos and videos are automatically uploaded, upon which they are accessible through any Drobo client. The app is part of the myDrobo suite, which includes Drobo Access, allowing users to access their data anywhere through an encrypted connection. The app itself looks alright, although it's not material - a right-side navigation drawer and total lack of an app bar puts a stop to that - which is a shame, and the icon is basic to say the least. However, it looks nicely designed and easy to upload pictures to or check the state of the Drobo server, so that's the main things covered. 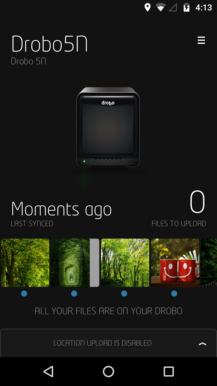 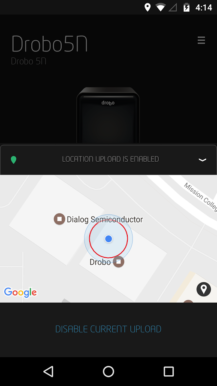 To upload pictures and videos to the Drobo server, two things must occur: the device that is uploading to Drobo must be on your home WiFi network (presumably the same network the server is connected to) and you must be at home. This two-layer verification apparently increases security and safety, seeing as things can not be uploaded at work by mischievous colleagues, or if your phone gets stolen, for example. However, only people with the Drobo B810n or 5N servers - Drobo's Network Attached Storage products - will be able to use the new app and the myDrobo suite.

While its usage might be somewhat limited, the features seem good; if I wasn't heavily invested in Google Photos I would probably be interested. If you have a Drobo NAS, or are interested in storing your photos and videos privately, DroboPix is available to download from the Play Store now. Drobo™, the maker of award winning storage solutions for businesses, professionals and consumers, today launched the Android version of their photo and video upload app, DroboPix, as part of the company's continuing efforts to bring simple, safe and secure solutions to its customers.

DroboPix is part of the myDrobo suite of applications that automatically uploads and organizes mobile photos and videos. The iOS version was launched last year, and development of the Android version started soon after a surge of customer requests. The DroboPix app allows 5N and B810n owners the ability to upload photos and videos seamlessly to their Drobo when within range of their local Wi-Fi network. The geolocation verification and usage of the user's Wi-Fi adds two layers of security, while the transfer over Wi-Fi conserves battery power and cellular data usage.

"DroboPix availability on Android devices reinforces our commitment to simple, safe and smart storage solutions that make our customers more productive, and preserve simplicity," said Mihir Shah, Drobo CEO. "We initially launched DroboPix for iOS devices, but the high customer demand from Android users and the increasing need for managing mobile content makes this app a must have with Drobo NAS products."

Focus on Customer Requirements and Ease of Use
Drobo is dedicated to extending the functionality of Drobo devices, and the Android version of DroboPix allows more Drobo users a simple way to back up their mobile photos and videos. As with all Drobo solutions, DroboPix continues the tradition of preserving simplicity, safety and security of user data. Drobo's myDrobo suite of applications creates a storage solution that can keep pace with a user's needs while providing access to data seamless and secure. Learn more about DroboPix and the myDrobo suite of applications by visiting www.drobo.com/mydrobo-platform/.

Meizu M5 Note review: Do not buy this phone