Android tablets are certainly not the shining example that most of us would hope them to be. Some even argue that these tablets are dying a slow, uninteresting death in the wake of poor sales figures and declining usage across multiple sectors. All this doom and gloom in this saturated market at large has not discouraged Asus from taking stabs in the dark, though.

Recently, our very own Corbin took a look at the ZenPad 3S 10. He came away rather impressed, calling it one of the best Android tablets around. I now want to give that crown to the ZenPad Z10, which steals it with a better SoC, bigger battery, and Verizon LTE support.

But what is that worth in the decline of this device segment? Not much, to be honest. However, there are still places where this tablet shines enough to give me a small, fleeting hope. 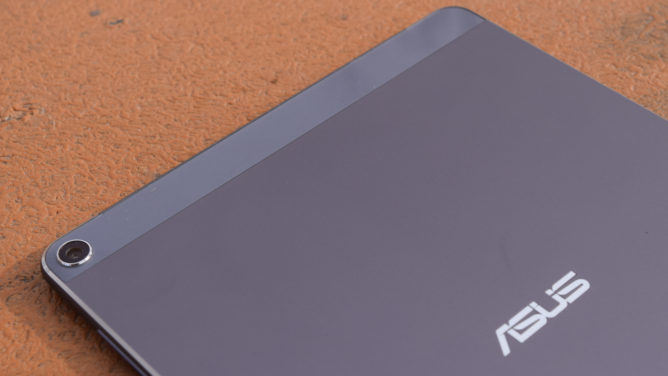 Similar to the ZenPad 3S 10, the Z10 has a strikingly familiar design. Much of the design language is similar to that of the most recent iPads, from the camera placement to the choice in navigation. The 9.7" screen is a perfect size, however, and with the svelte metal body, the Z10 is an absolute joy to use. Weighing in at 490g, it's no feather. Regardless, the weight is more than worth it considering the size of the battery.

It comes in one color: a very nice gray. That nice, subtle finish is only disturbed by a small strip of glass at the top for the antennae. The round camera module sits in the upper left corner, protruding slightly. You will find the Asus logo displayed prominently in the center, with Verizon's logo and the FCC information at the very bottom. To be frank, since this is a Verizon exclusive, I am surprised that Big Red's logo is not as large or larger than Asus'. Not that I'm complaining, mind you. 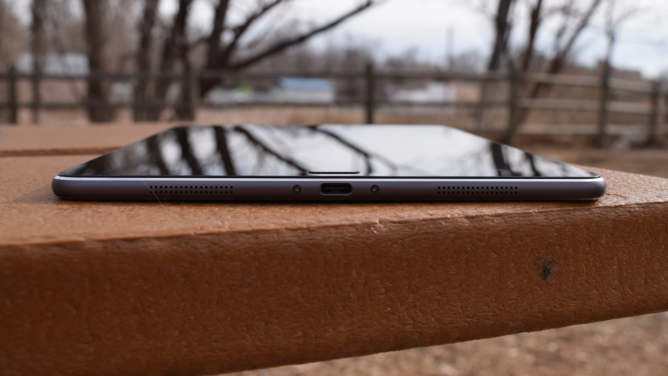 The front of the Z10 houses the beautiful screen. Holding it in portrait mode, the front-facing camera is smack in the middle of the top bezel and the Samsung-esque navigation buttons are along the bottom. Along the right side, you will find the power button and volume rocker. These all have satisfying clicks with just that right amount of resistance to prevent you from accidentally pressing them. The bottom of the frame houses the USB-C port and the stereo speakers, while the very top only carries the 3.5mm jack and the left has the SIM/SD card tray.

The navigation bugs me, and not just because I am an outspoken fan of on-screen softkeys. The home button is hollow and feels cheap, especially compared to rest of the tablet, while the Back and Recents buttons are left to sit very close to the center. Honestly, it is like using a Samsung phone with how they are spaced. Those two keys do not light up whatsoever, making navigating in the dark unpleasant. Seriously, who thought it would be a good idea to leave out a backlight for these? 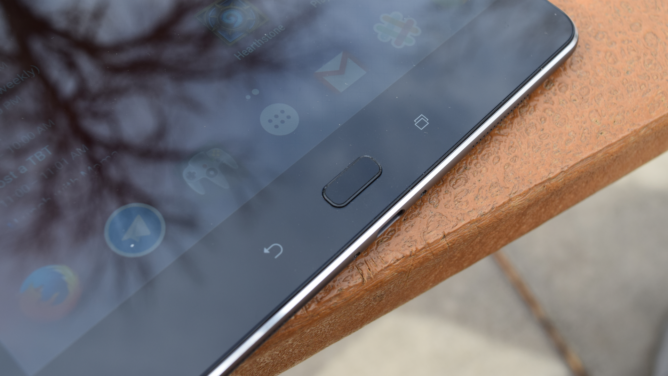 The speakers are a point of contention for me. Not only are they bottom-mounted, so my hand covers them when in landscape mode, but they are not that good. There is a lot of distortion and crackling even at roughly 60% volume. Notifications are tinny, vocals are often distorted, and there is little that makes me excited to use these speakers. On the other hand, plugging in a pair of headphones gives you access to the DTS Headphone:X experience, which brings 7.1 channel virtual sound close to your ears. This definitely helps to counterbalance the subpar speaker experience. 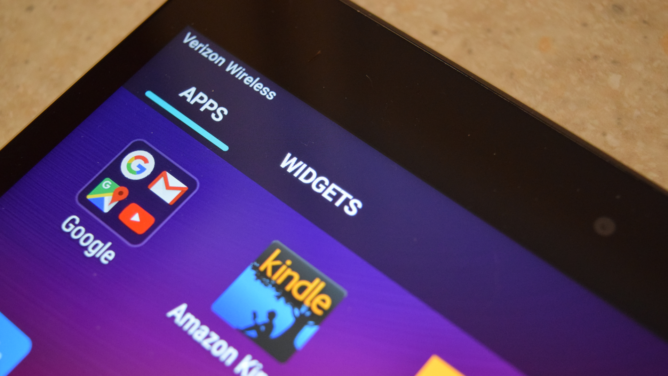 I realize that I keep mentioning the screen, so let's get into it. The resolution comes in at 2048 x 1536, which is just a tad above 2K, and sports a 178° viewing angle. The side bezels measure in at 5.32mm and overall, the Z10 has a 78% screen-to-body ratio. Like the 3S 10, the display is easily one of the best features of this device. The colors are amazing and the contrast is spectacular, regardless of the brightness level.

Overall, Asus really achieved a premium feel to this tablet, minus the nav keys. From the finish to the measurements, the Z10 is a joy to hold. Tablet cameras are usually pretty awful. With that in mind, the ZenPad Z10's isn't too bad. It favors overexposure in almost any situation, especially indoors. HDR helps to mitigate this a bit, but not much. There are plenty of modes to play around with, including a depth mode that hearkens back to the HTC One M8 without the dual camera. Color balance is definitely lacking, too. Let's face it, though: tablets shouldn't have rear cameras.

Instead, I'd rather them focus more on the front cameras. The 5MP on the Z10 does okay, I guess. It's not worth a damn for the selfie game, and it just barely passes for video chatting. It has the same issues as the rear camera, only more so. It struggles in low-light, pushing out noisy photos, and the "Beautification" setting is not as effective as you might think.

After the disappointing camera experience, I think it's time to get back to the positives. The ZenPad Z10 chugs along wonderfully no matter what I am doing. The hexa-core Snapdragon 650, coupled with the Adreno 510, makes excellent work of any task, game, or video. Pushing that many pixels, you would think that there would be some stutter every now and again. I never had anything of the sort.

As usual, here are the benchmarks for those of you who care. 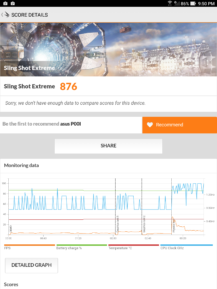 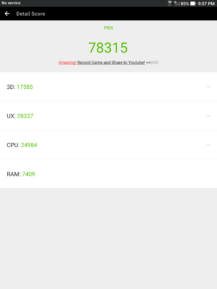 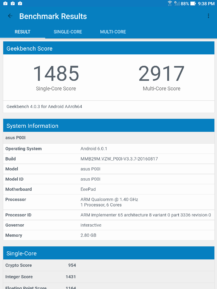 3GB of RAM is less than I would like to see, but it does what I need it to do. Apps loaded up quickly and I saw no evidence of the aggressive RAM management that I am used to on the devices that I usually review.

Gaming performance was very nice. I don't game much on mobile, but I do like to play Hearthstone and Sky Force from time to time. As with the general OS itself, I found no lag or framerate drops in either of those, nor in any of the games that my wife plays.

I have already mentioned the battery life and how good it is. The massive 7,800mAh cell is an absolute champ, such that when it finally died many days after its initial charge, I was actually excited. With minimal to moderate usage, the Z10 lasted almost nine days on WiFi exclusively. Doze mode in Marshmallow definitely helps and if Asus did anything else in ZenUI for battery life, it is not apparent in the UX. On LTE and WiFi, the total time dropped to just shy of seven days. 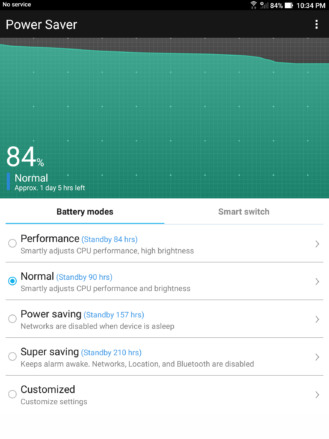 Neither of these is anything to sneeze at, but how does the battery fare under heavy usage? At 100% brightness with an afternoon of heavy gaming, YouTube, Netflix, and Plex streaming, and IM chats, I got about 6.5 hours of screen-on-time. Those conditions are by no means how I normally use a tablet, so if you're anything like me, expect a much higher number.

Asus has not had a good track record with either good software or software updates. I remember my old Transformer TF103C sitting on KitKat for... well, forever. While I am still not certain about update reliability in this case, I am happy to say that ZenUI has markedly improved in the years since then. It does not irritate me like other software "skins," but nor do I particularly like it. It's just meh.

There are multiple facets to ZenUI, from the color palette and overall design to the launcher to the "bloatware." Not all of these elements are bad or poorly implemented, but ZenUI makes some odd choices here and there. I usually prefer the "stock" feel of Android, but I applaud Asus for making an attempt to improve the rather lackluster state that Android on tablets has devolved into in recent years. 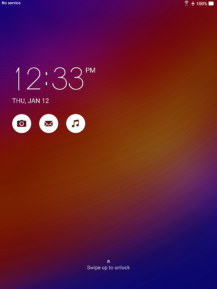 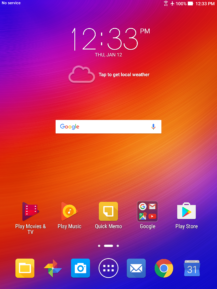 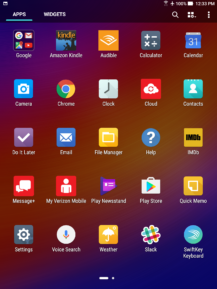 So let's start with the most obvious thing that I can think of: the ZenUI Launcher is pretty dated. We're talking KitKat level stuff here. While the app drawer icon is not important, it's the drawer itself. It's been ages since I saw the "Apps" and "Widgets" tabs, along with the paginated layout for the apps. It startled me at first, frankly.

The launcher itself functions just fine for what it is. I immediately slapped on the Google Now Launcher for good measure and review purposes. The Zen apps are mostly innocuous bothers, and even the Verizon ones stay out of the way. There is support for unread count badges here, but it's mostly limited to the Asus apps. 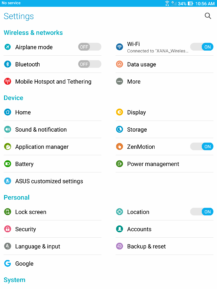 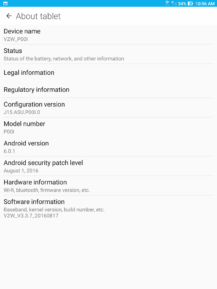 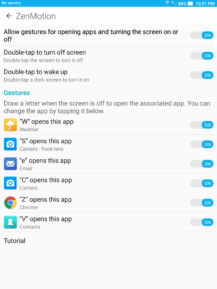 ZenUI opts for white and cyan as its primary colors, which is not to my particular liking. The Settings menu is laid out nicely, with Asus' particular options intermingled. The ZenMotion section you see there is similar to what you might find on a OnePlus phone. It houses screen-off gesture settings, such as double-tap to wake and sleep. The other gestures, laid out as various shapes, can be customized to open specific apps when you draw them. So while nothing unique or new, it is still pretty cool. 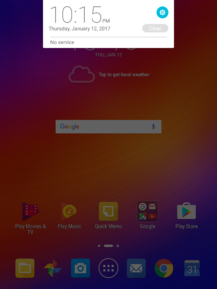 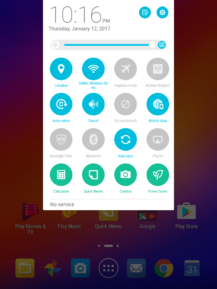 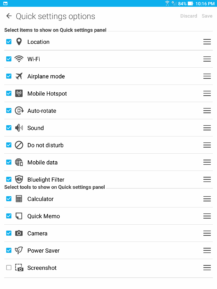 Finally, I want to address the update anxiety that many feel toward Asus products. Indeed, the track record is not the best here, though I have seen much worse. So far, there has been one update available for the ZenPad. Unfortunately, I have not been able to install it because all attempts to do have failed, OTA or manual. As to the former, it requires an LTE signal to check, which is asinine.

The nice thing is that I have not run into any weird bugs or whatnot. The software experience has been stable and tolerable in the while that I have been using this device. 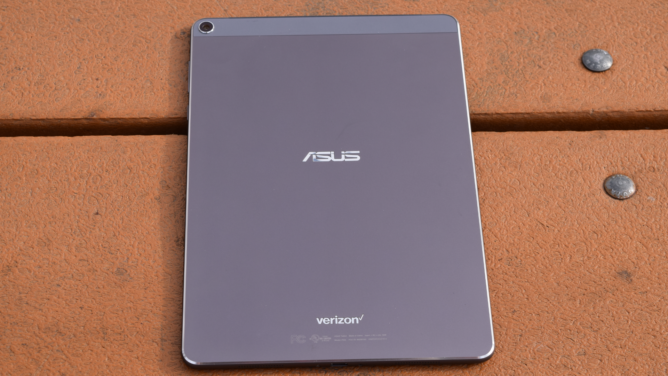 The ZenPad Z10 is a decidedly better tablet than its cousin, the ZenPad 3S 10. It offers fantastic performance, wonderful build quality with a beautiful screen, a pretty decent software experience all things considered, and simply amazing battery life. It's because of these things that I think it is one of the best Android tablets you can get right now, for what that's worth. What makes it even better is that you get all of this for $329.99 outright, $149.99 on a two-year contract, or for $13.74 per month.

I used Verizon data for a month just to see how well it worked. In short, connectivity was excellent where I live (which has strong coverage).

The Z10 ticks a lot of check boxes, especially considering its price. There are some mild annoyances, most notably the navigation model and the speakers, but I learned to get used to them after some time. Overall, I found a lot to like here. The bummer thing is that, at the time of this writing, this tablet is missing Nougat — the lack of split-screen is very noticeable on a device this size. With Asus behind the helm of the update process and Big Red probably slowing things down even more, it is likely that quite some time will pass before the Z10 sees Android 7.0/7.1 and its utilization of larger screens... if it ever does. I do remain cautiously optimistic, though.

I know that there are some Verizon customers out there who are looking for a well-priced, long-lasting tablet that will be the best bang for their buck. Considering the other offerings, the Z10 is hands-down the best option in the price-to-performance ratio (especially when pitted against the Galaxy Tab E and VZW Ellipsis lines). Although, in the high likelihood that you are not in that tight niche, this becomes a harder sell. The ZenPad Z10 is a great product, but its exclusivity, and therefore limited availability, shrinks an already small, uncertain market.