Just over two weeks into 2017 and there's already a second beta update to the Google app rolling out to users. The previous version didn't present with any notable new features, but it did leave some clues about future updates. The latest update is also packed with nuggets of future improvements, but it also adds at least one feature for people that have to search internationally from time to time. This update is currently rolling out to users signed up to the beta program, but if you want to pick it up separately, there is a download link at the bottom. 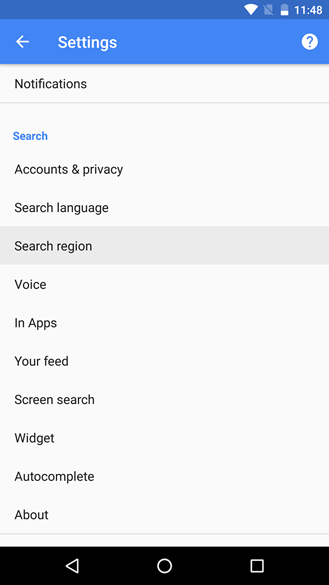 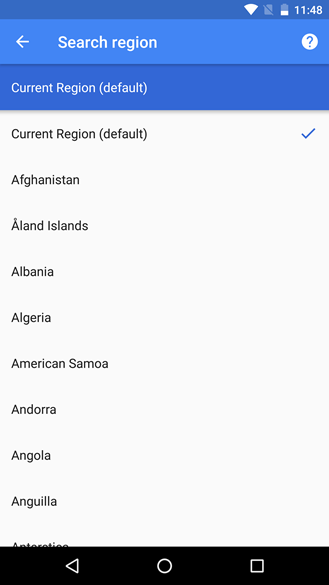 Google's contextual search is well-known for handing out different results to people based on their location. If you're about to take a trip to another country, or perhaps helping out an international friend or family member with something in their neck of the woods, you might find many of your searches don't turn up very many relevant hits. The latest Google app update makes it a little easier to see things from their perspective.

There's a new option in the settings screen where users can switch their search region to something appropriate to the situation. It's probably not going to be used very frequently, but it could be very handy if the situation calls for it. And once you're done with it, don't forget to switch back to the default setting, which automatically uses whatever locale you're actually in.

One of the distinctions between Google assistant and its early iterations is the way it communicates with outside services. Google's previous implementations were all custom and relied on partnerships between two companies, but assistant opens the doors to many other companies.

Some services will require that you link an account, like Uber, while others are completely content in knowing basically nothing about individual users. However, many companies will land somewhere in between. They don't ask users to establish permanent accounts, but they can still use an identifier to recognize returning users and link them with previous sessions.

If you aren't in love with the data that has been linked to you from previous situations, whether you're concerned with privacy or you're just getting some really weird recommendations, there is going to be a solution. A reset command is going to be added to service screens so users can dump the old unique identifier used with that service and create a new one. As far as the service is concerned, you'll look like a completely new user.

This won't remove the previously stored data from the service, but it will make you look like a different user and prevent new data from being combined with the old data. As the description points out, a reset like this cannot be undone, but Google will hold a record of your interactions with each service in the My Activity screen (which can also be cleared separately).

A new setting will likely be added to the Voice preferences screen that will allow users to turn off something called "embedded mode," or alternatively, "embedded transcriptions." While I'm not 100% sure of what this is, my assumption is that it will hide the live transcription of text while listening to voice commands, leaving just the animated dots dancing on the screen.

If my guess is correct, this is a cosmetic decision. If you feel like Google's interpretation of your speech is sufficiently accurate, you might not care to see the readout of the words across the screen. The experience would be roughly similar to using Google Home, which has no way to show users how it understood the words that were spoken.

Again, this one is a bit too vague to say with confidence, but some new text may hint that Google is preparing to expand the footprint of assistant. The lines in question are for an upgrade prompt, informing users that they will "still be able to get instant information about what's currently on your screen" with Google Assistant.

Okay, bear with me for the logic. Since Google assistant is already standard on the Pixel, you're not likely to see an upgrade prompt on one of those devices. Likewise, any message related to the functionality we used to know as Now on Tap is probably not going to be expressly explained anywhere but a device that previously had it. Thus, it makes the most sense that users should only see this message on a device that has been switched from Now on Tap to Google assistant.

On the other hand, it's also possible this is a message for people that are transferring from another phone to a Pixel, thus warranting a brief message to let them know how things have changed. Soooooo, yeah, keep your optimism (or hate) in check. Even if the above messaging is about Google casting a wider net, it may only expand to Nexus devices at first. – Thanks, EvoWizz.

The last Google app teardown turned up something called Search Gesture, a search action that could be initiated with a swipe on the home screen. There weren't any specifics to go on, but as Kevin Barry (developer of Nova Launcher) points out, something like this has been in the open source project launcher3 for a long time.

There aren't any new strings, per se, but all of them have gone through a rewrite. New verbiage uses friendlier terms (i.e. removed "corpus") and a catchier name: Swipe to search. The description has lost the little bit of vagueness it had in the previous version, this is clearly a shortcut to open the search interface. The options are also spelled out in meaningful terms, indicating that users may either search just their apps or hit the entirety of Google Search.

Swiping down on the home screen still doesn't produce any results for me. Unless there's a staged rollout to activate this part of the interface, Google is probably waiting to roll it out at a later date.

This one isn't based on much, nor is it that special, but it's an improvement if you're used to getting a lot of news from Google Now. Open up the stream and you're likely to find your weather, news, stock information, sports scores, package tracking, and an assortment of other things. If you leave and return to the screen later, there's a good chance some of that information will be updated or replaced with something new. However, sit on that screen and things probably aren't going to change. That's actually a good thing because most people hate to have things change on the screen when they're trying to use them, but it means the information can become stale.

The new line is used in a snackbar control to inform users "new posts" are available, and a text button will be off to the side that will refresh the content of the stream. That's about it.