The poster says that he or she works at a Barnes & Noble retailer, where a company-wide order has been sent to remove all Nook Tablet 7" hardware from the store and ship it back to the supplier. That includes demonstration kiosks and other marketing materials - the product is apparently being scrubbed from all bookstores nationwide. We can't verify the information based on the message posted to Reddit, but there is a photo indicating a message to store managers about returning all hardware. The Nook Tablet 7" is currently not being sold on the Barnes & Noble website, either. 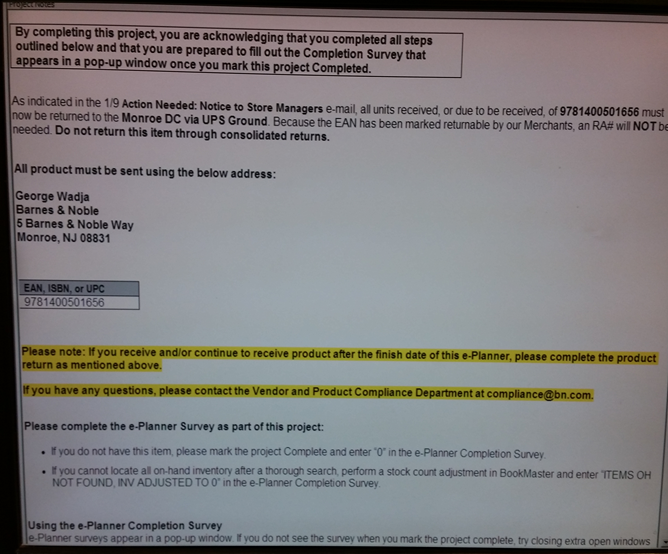 The poster speculates that this is a fallout from the Adups spyware scandal, which caused budget phone maker Blu some serious PR problems last year. The unnamed Chinese supplier of the new Nook Tablet hardware seems to have used some of the same potential spyware. Barnes & Noble previously committed to a software update that would remove the offending built-in spyware, just like Blu. But for some reason the tablets are going away. Either the software engineers couldn't remove the spyware to a satisfactory degree, or this has nothing to do with spyware at all, and Barnes & Noble is selling so few of the actual units that it's just giving up on the product entirely.

We've reached out to Barnes & Noble for comment, and will update this story if we receive a reply.

A Barnes & Noble representative responded to our inquiry, and as it turns out, the retail recall has nothing to do with spyware or sales. The charging adapter included with the Nook Tablet 7" has been found faulty.

Barnes & Noble is investigating three reported cases involving the adapter sold with the NOOK Tablet® 7”. The specific issue involves the adapter casing breaking apart while still in the socket. This does not affect the NOOK® device itself. With no injuries reported and out of an abundance of caution, we recommend that customers stop using the adapter until we provide a replacement adapter. In the meantime, the NOOK Tablet 7” can be charged using a computer. We will be providing more information as we work closely with the Consumer Product Safety Commission (CPSC) to determine the details of a public product recall.

Assuming Barnes & Noble can find a reliable supplier for alternate AC chargers, it should be able to repackage all of the existing tablets and sell them as new once they're returned to retailers. In this situation replacement parts are usually issued to end users who already purchased the device.

Motorola has an MWC event scheduled for February 26