Bendable screens sound great in theory; they allow you to choose between two different form factors, on demand. We've seen them on quite a few concept devices over the years, but according to a recent report out of South Korea, Samsung may be the first to make them a reality.

This is nowhere near the first time we've heard about Samsung and folding screens - not really a surprise, considering the company's reputation and history with futuristic screen designs (Galaxy Round, Galaxy S6 edge, etc). After all, the technology has been prominently displayed at multiple trade shows. This also isn't the first time we've seen a phone-tablet hybrid; Lenovo demoed something that sounds very similar to what Samsung has in the works at Lenovo Tech World a few months ago. 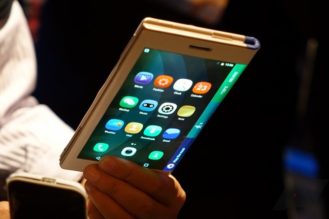 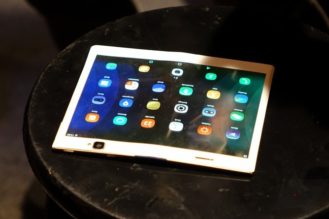 Back in June, it was reported that Samsung had two foldable smartphones in the works: one that folded like a flip phone, and one that could transform from a 5-inch phone into an 8-inch tablet. We saw patent drawings matching the former's description around two months ago, and today's report from The Korea Herald matches the latter's. The Herald's source claims that Samsung will manufacture over 100,000 units in Q3 of 2017, a pretty solid amount for what is essentially the first production execution of this new tech.

Apparently, Samsung has been toying with both "fold-in" and "fold-out" phones. Folding in, which would require users to unfurl the device before interaction with either the smaller or larger screen, had its testing completed, but was left somewhat abandoned a while ago. Folding out, which is more convenient for users and resembles Lenovo's prototype above, has been in development since August.

Even though the idea is technically ready after lengthy R&D, Samsung is still considering whether it should release them in 2017 due to potential issues with marketing and profits, as well as a delayed management reshuffle following a scandal involving South Korean President Park Geun-hye. It's also worth noting that LG has been testing similar technology for around three years, possesses more advanced technology, and is planning to release a similar 100,000 units during Q4 2017. In any case, it seems likely that we'll finally see some foldable phones this year.

According to Business Korea, it's more likely that this foldable smartphone, currently dubbed "Galaxy X," will be unveiled in the first half of next year. Kolon Industries, a supplier for both Samsung and LG currently, is expected to complete production preparation of polyimide film, which will be used heavily in devices with bendable screens, by January 31st. Since it takes around two or three months for parts to be supplied, we should expect foldable smartphones to make their public debut sometime at the end of Q1 2018 or the beginning of Q2 2018.