When you hear the name Vizio, you usually would think of TVs. Perhaps some of you may even know of its soundbar product line. Whatever your knowledge of the likely-to-be LeEco-owned Vizio may be, we need to discuss this speaker. The Crave 360 is an odd thing that looks like an Amazon Echo, has Google Cast built in, and tries to be a viable Sonos alternative.

But does it succeed in its attempt at the latter? Not quite. However, it is still a nice-sounding, multi-room speaker that has a little bit extra that sets it apart from its run-of-the-mill cousins. 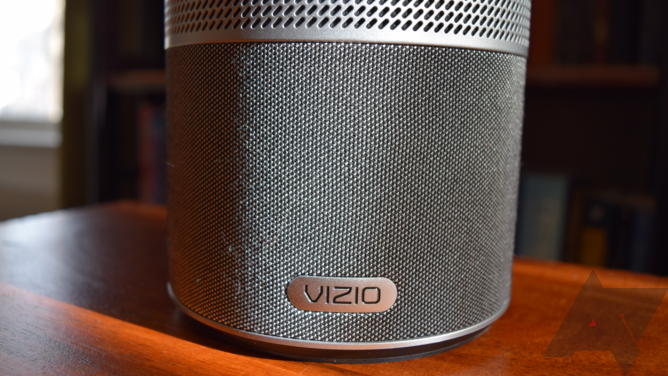 From an aesthetic standpoint, the Crave 360 looks very similar to Amazon's Echo. That is not to say that this is a bad thing — the cylindrical shape helps with sound distribution. In a small room or enclosed space, this really shines. But the speaker itself is large, rather heavy considering the focus on portability, and somewhat bland in appearance.

It stands 10.04" in height and 4.92" in diameter, packing in four 1.5" full-range sound speakers and a sealed 3.5" subwoofer. The frequency ranges from 50Hz to 20KHz. The front shows only the Vizio logo, while the back has the power button, USB port, and ethernet port. The battery, which is touted at 8 hours of life, is charged wirelessly via a stand. On the top of the speaker, you will find seemingly nothing at first. However, much like the Google Home, there is a touchpad here for basic controls like play/pause and skip. Also, the upper bezel rotates smoothly for volume control. 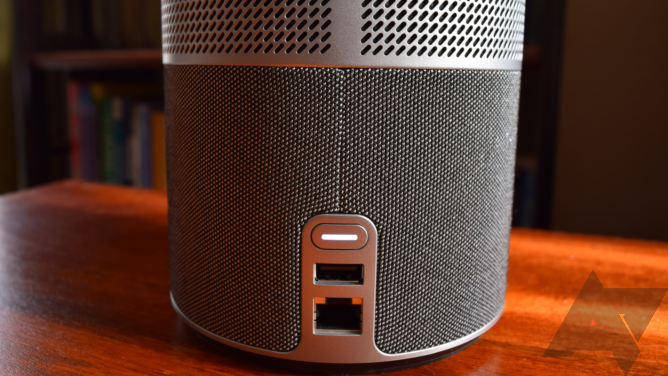 Other than that, the Crave 360 is a gray and darker gray cylinder. For some, this may fit with your décor and it will look just fine. However, in our house, it did not sit too well with how we have chosen to do things. This seems ridiculous, but it is important to consider if you plan to have this thing out in plain sight. I mean, why do you think that Google offers alternate bases for the Home?

Now, of course, we cannot forget about the Google Cast functionality... or whatever the hell Google is calling it these days. That is the key point around which this whole product (and its bigger brother SmartCast speaker, the Crave Pro) is marketed. I am sure that most of you know by now what this does, but for those of you that do not, I will briefly explain. Basically, the Crave 360 connects to your home Wi-Fi network through which you "cast" music to the speaker from a compatible app. 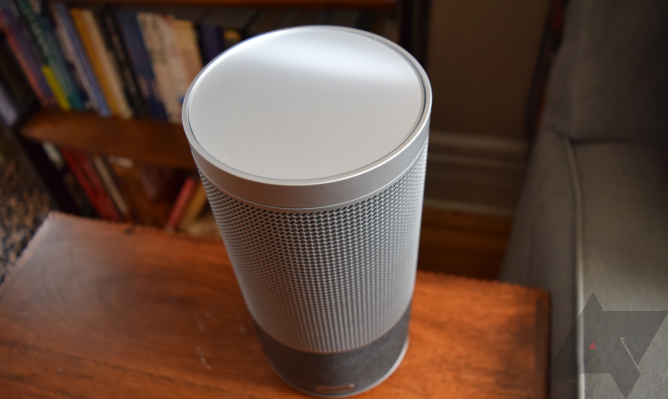 For the most part, it works as you would expect and as well as a Chromecast Audio. There were the usual disconnecting issues that I have always had with Chromecasts: the music keeps playing, but the device in use shows as no longer connected to the speaker. Because of this, I cannot control the playback or volume. The resolution is to open the cast menu in the particular app and reconnect to the Crave 360. Overall, it was a mild inconvenience that led to costing an additional few seconds to pause or skip the song.

Finally, we get to another point in the marketing material: the Crave 360's portability. The battery life is claimed to be about eight hours, which I found to be pretty spot on while using it at about 30-50% volume. Vizio really wants you to take this thing with you, whether from room to room or outside. Funny thing about that last part: the speaker is not waterproof. Also, it weighs just shy of nine pounds, making it slightly cumbersome to carry around even with the included wrist strap (which ruins any aesthetic appeal, in my opinion). So yes, the Crave 360 is "portable", but I strongly recommend finding a good spot for it and leaving it there.

Before we get too much further, let's discuss the SmartCast app. In all, it is a very straightforward Google Home-esque style app that allows for speaker control and content discovery. It has audio options for EQ and the like, input controls, and network settings.

Content discovery acts more like ads than honest suggestions sometimes. I have been barraged with banners to purchase Suicide Squad from three different vendors in the month that I have been using this. Unless I need to access the settings for the Crave 360, I just stay out of the app since I use the Cast functionality exclusively. 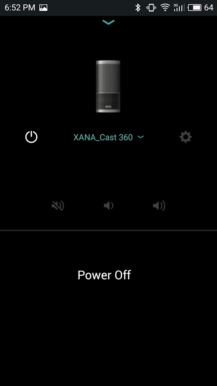 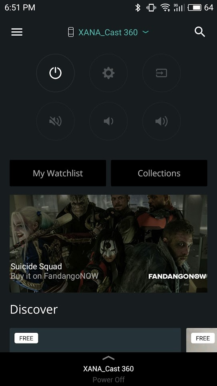 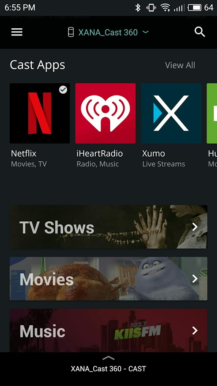 However, the settings have some fun places to mess with things. I strongly prefer heavy bass as treble bugs me if it is too strong, so you can see what balance I opted for in the second screenshot below. I know that I mentioned EQ settings, but that feels like a stretch. You have two options for the equalizer: Enhanced and Natural. I chose the former as it sounds cleaner to me, but I was very disappointed in what I had to choose from. TruVolume helps to normalize the volume levels — when I turned it off, the volume jumped (at 30%, mind you) and the sound became rather distorted. I immediately turned TruVolume back on and have not touched that toggle since.

In the system settings, there are two options that are actually important. The Eco Power is essentially a battery saving mode in which the Crave 360 will go into hibernation until you press the power button on the back. Having this feature really helps to extend the battery life, nearly doubling it in my usage depending on what I was doing. This should surprise no one and I think that it should be enabled by default. 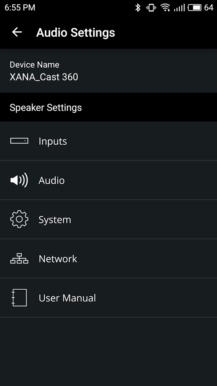 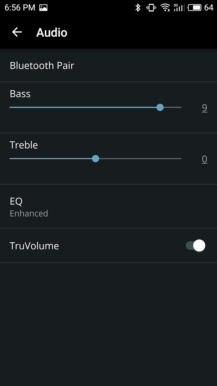 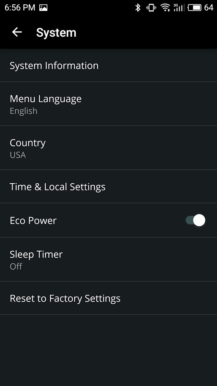 The other simple setting is the sleep timer. Before I got my Google Home, this thing sat on my nightstand and was perfect for playing soft music before bed. The sleep timer is invaluable from that standpoint and should be standard on anything in this product category.

I am sure that this is the part that you all are wanting to hear more about... pun intended. How does the Crave 360 sound? Well, it sounds pretty darn good. It destroys almost any other portable Bluetooth/Wi-Fi speaker I have had in my house. The lows are quite fantastic and can make most of the house vibrate at higher volumes. Mids are also satisfying. Objectively, this speaker has above average sound quality.

Sheer volume and bass from this thing are quite stellar, with distortion only audible at 75% volume and above. But I do not recommend going that high if you have any sort of normal room — suffice to say, it was painful. Let's be real here: this is what I would expect from a speaker this size. The high, mid, and low balance is spot on for me, especially with the Enhanced EQ setting.

As good as the sound quality is, how does it compare to its Sonos competitors? It stands above the Play:1, but falls short of the Play:3... so think of it like a Play:2. However, the Crave 360 costs less than a Play:3 and I think that it is good enough for most people. The software is rather lacking, though, especially with the very limited audio options as compared to the Sonos app. 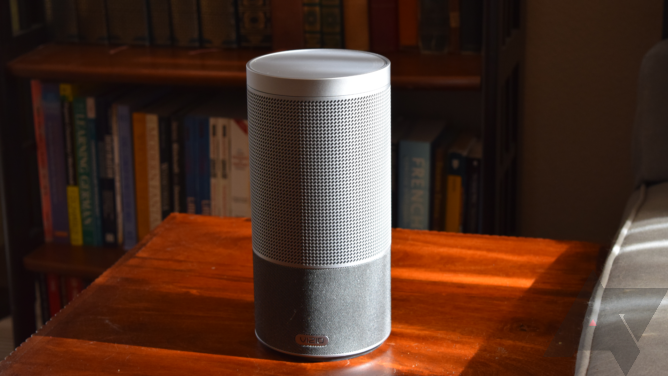 The Crave 360 is a very admirable speaker. It packs in some good sound into a heavy, gray cylinder that may or may not look good in your home. The $250 MSRP is a little high, I would argue, although I have seen it on sale for less than $200. At that price, I heartily recommend it. However, at $250, I feel iffy about it. The average music listener will be happy with a Bluetooth speaker in the $150-$200 range (and you can get a lot for that money). Someone more sound-conscious might be willing to spend the extra $50 for either the Play:3 or the Crave Pro (which is a soundbar-style design and easier to blend into your home), both of which have better sound quality.

The SmartCast app experience is definitely not favorable, nor is the lack of fine-tuning in the settings. Even having the spectrum of EQ choices (e.g. bass booster, rock, metal, electronic, etc.) would have been preferable. Still, use of the app is only required during certain points like setup and adjustment so it's tolerable for short periods.

I don't dislike the Crave 360 — rather, I applaud Vizio for its attempt at an offering in the Wi-Fi speaker market. I had a lot of fun with it, happily blasting some of my favorite metal, and I would be very pleased if someone purchased this for me as a gift. That being said, I do not think that it is worth the cost at its full price considering the other options in this lower tier of sound devices.

[Deal Alert] Lara Croft: Guardian of Light and Cross DJ Pro are down to 10 cents in some countries

The LG G6 will have a 5.7" display with a weird aspect ratio, according to LG