2017 marked my sixth consecutive attendance at the world's largest technology event, and for the sixth year, I left feeling like phones weren't really a very important part of it all. I have come to accept that's just what CES has become, especially given it sits in the shadow of the much more mobile-focused Mobile World Congress show in Barcelona, which is happening about seven weeks from now. But before we start looking ahead, let's talk about what happened last week.

CES has always been a proving ground for bold ideas from companies big and small. In 2017, the bold move is to take normal products that consumers use and smartify them. I literally saw a smart hair brush. Just think about that for a moment. Of course, many of these more openly ridiculous products are far more about generating attention then they are sales. It's a way to gauge public interest in an idea - measuring the "wow" factor versus presenting a product on the basis of it having a sustainable business model. The smart hair brush industry probably won't ever be a thing (thankfully), but the idea that technology could play a role in the portfolio of a hair product company is more what that useless contraption represents. In other words: we can safely ignore the smart hair brush, both because it is a bad idea and because it is utterly pointless, but we are probably in for the long-haul on the thinking that leads companies to build this sort of thing, even if we're probably at peak silliness with it right now.

CES is transforming to reflect this (in fact, we saw tons of this same stuff last year). Brands that never had a place at a cutting-edge technology show now dominate it. Hell, a third of the floor space now goes to cars (which is fine by me, as an enthusiast of the automotive variety). This makes our job covering the show a lot harder than it used to be, because CES is increasingly becoming saturated with products that work with smartphones, but in ways that are generally unclear until you actually sit down and use the thing. This means we're never sure which meeting to take or which booth (or building, or hotel) to scout, because we have a limited amount of time and a limited amount of fingers with which to type and edit videos for you. I definitely felt a bit paralyzed more than once at this year's show because I just didn't know where our time would be best spent. 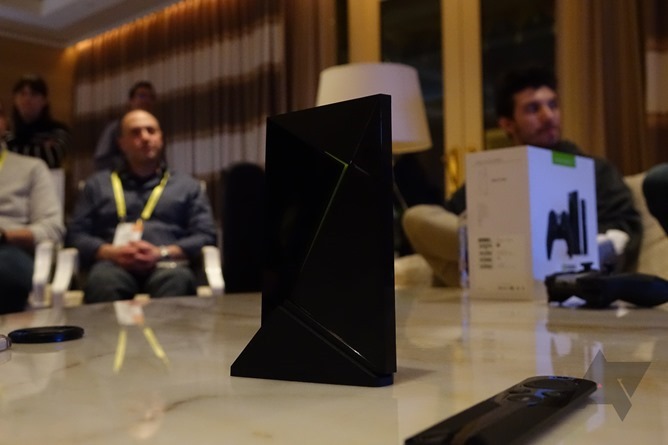 NVIDIA's new SHIELD console was one of the real points of excitement at the show for us.

Anyway, we'll probably still continue to ignore all but the real standouts in the nascent "Internet of Things" and smart home industry here at AP. There's just so much noise in this area, and a lot of the products are, if not actual trash, at least worthy of association with objects that can be disposed of in a waste receptacle. As companies discover what works and what doesn't when it comes to making our "normal" stuff smart (read: that 95% of the crap in our lives does not need Bluetooth), they're going to try a lot of ridiculous and ill-fated things. A course correction on "smartifying" is probably inevitable - I mean, there's literally a cultural meme emerging around the idea that the vast majority of these products are immensely stupid. I have a feeling there's going to be some serious whiplash for companies doubling down on this idea, like it's just a natural evolution of technology to add 4G to your leaf blower. Make no mistake: this is a fad.

I was also reminded on a nightly basis that CES's infamous ballroom wine-and-dine tech bazaars (think of a job fair, but with tech product pitches and a buffet) are a good snapshot of what's generating hype in the tech product space right now. I think the winner this year was Airpods But Not Airpods, of which I saw no less than a half dozen varieties. I look forward to the many Airpods But Not Airpods of the coming year, as I am sure some will be very good Airpods.

On the note of things I liked at CES? I think a quick scan over our favorites here should give you an idea where CES is going these days in terms of stuff that is actually cool. Cars are getting smarter in meaningful ways, incremental silicon advancements are becoming more noteworthy because that silicon is more and more important, and Cool Stuff that works with your phone is still definitely out there. Personal audio is a big part of CES (and always has been), and TV remains a cornerstone, as well. But I'd be lying if I said much of any of the phone news out the show was truly exciting. Huawei re-announced a [good] phone, TCL's BlackBerry prototype was intriguing but went undetailed, and ASUS's ZenFone AR is a noteworthy tech first, but that tech has yet to really prove itself as engaging or useful.

As to more meta matters, this was the first CES where Android Police's primary focus was video. We produced nine videos at the show with our hosts Facundo Holzmeister (of HowToMen) and Zachary Anderson (of eztech231), and a lot of our time was spent on figuring out how to make that content come out quickly and smoothly in a trade show environment. It was a big learning experience for all of us, and I feel much more prepared about what to expect when we head to MWC next month as a result. So, CES was certainly useful for AP as a team, and it was great to finally meet our video team together and in person.

Also: A shout-out to our transportation partner during the show, Buick, who graciously lent us one of their 2017 Envisions, in which we ate several meals. We also drove it (around 700 miles), and it was very, very comfy. You should check it out.

With that all said, I'm guessing we'll be back at CES again next year, probably still slightly confused as to just why the latest Cuisinart food processor has Wi-Fi, and still digging up the stuff we think is worth your attention.

[Updated] Voice website banner mentions 'The new Google Voice,' but nothing seems to have changed