Logitech has been making cameras of the web variety for years, and it recently got into the home security camera market with Logitech Circle. The initial reviews were alright, but Logitech was lacking some important features that other cameras had. I guess it took the criticism to heart because a series of app and firmware updates have added lots of new stuff to the existing hardware. It's actually gotten much more capable, and the pricing remains competitive. Taking another look at Logitech Circle, it's a great option for home video monitoring.

The Logitech Circle camera is adorable. It's a small orb sitting atop a flat base. The base is a built-in adjustable stand that lets you angle the camera as you like. This will work great for most positioning, although I will note that it doesn't tip very far forward. That makes placing it on top of a high shelf a little awkward. There's a status LED on the front that can be disabled, as well as a microphone and speaker. The housing is solid, but it's not weather resistant. This is an indoor-only camera. 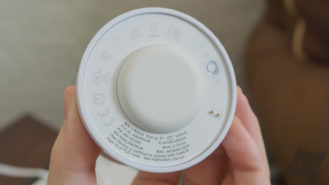 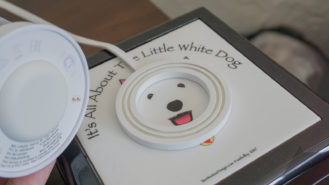 Logitech's charging connector for the Circle is really neat—it's a magnetic ring that you set the camera down on, and the cable is a generous 10-feet long. It also gives you a helpful little chime when the camera is connected to the ring properly. You don't have to worry about orientation, and it's really easy to grab the camera and set it down someplace else. Not for very long, unfortunately. One definite bummer here is that the Circle only lasts about two hours on battery power in regular mode. In power-saving mode, which only streams when you view the feed, the camera will make it around 10-ish hours. Still, some cameras don't have batteries at all. 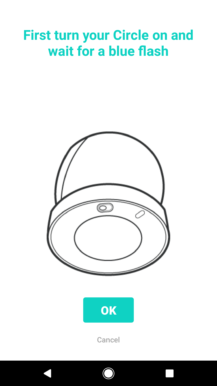 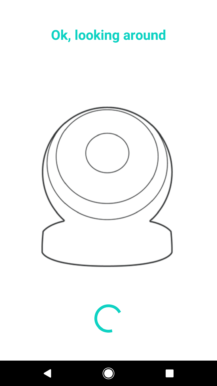 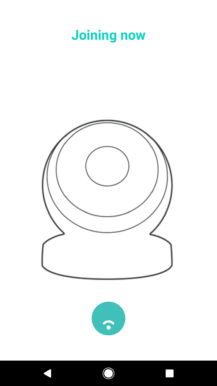 Getting cameras up and running is really, really fast. This is where a lot of camera systems stumble, but Logitech has it figured out. Simply turn on the camera and plug it in. In the Circle app, find the option to add a camera, and wait for the device to be detected. Your phone will connect directly to the camera so you can provide it with your WiFi network credentials. And that's it; seriously. The entire setup process takes about 30 seconds. I've had no connectivity issues with the Circle at all since getting it set up.

I would class Logitech's video quality as very good. The recent firmware update added 1080p video as an option. The Circle was previously limited to 720p. Even that didn't look bad, though. You can really only tell a difference when you zoom in on the feed.

The video coming from Circle isn't very compressed. It looks good, but that also means each Logitech Circle camera will upload about 150-200GB to the cloud every month. Music to Comcast's ears with its new bandwidth caps, I'm sure. If you've got more than one Circle, you might want to keep the video set at 720p to save some bandwidth. Unfortunately, there's no local storage option on the Circle, so video of all detected events is being uploaded. Logitech does note that all video is encrypted before being uploaded. 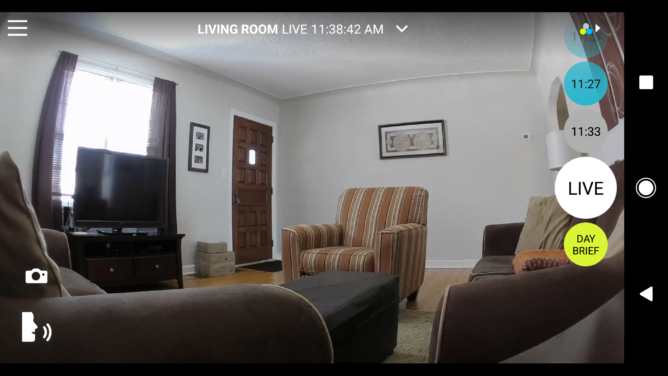 Video loads when viewing live almost immediately. Some cameras have annoyingly long delays when starting a stream, and then continue to be delayed as you're watching. The Circle is only about a second behind real-time—among the best I've seen. Notifications of activity are also dispatched quickly.

The Circle has a fisheye lens with a claimed viewing angle of 135-degrees. I feel like it's not quite that wide in practice. I'm not sure what's going on with that. The distortion at the edge of the frame isn't as bad as some other fisheye lenses I've seen, so maybe Logitech is trimming off some of the useless warped pixels at the very edge. In the dark, the Logitech Circle does well. The IR light is bright enough to illuminate a medium size room completely, although you need to be careful not to have anything too close to the camera as that makes it hard to keep the foreground and background illuminated properly. 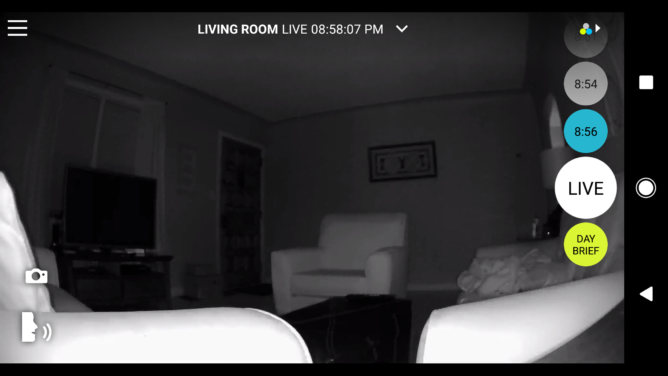 The Circle also has solid audio performance. The speaker is surprisingly loud, sufficiently so to be heard over a TV or several people chatting. Like video, there's very little lag in the audio, so you can actually carry on a conversation with someone thanks to the sensitive microphone in the Circle.

The Circle app got an update recently to go along with the new firmware, and it's a huge improvement. The old app had a strange grid of buttons to control all the camera's various functions, but none of them were labeled and on/off status wasn't always clear. It was also locked to landscape mode. The new app is too, but everything else is better. When you open it, you see your camera in landscape mode. If you have two or more cameras, the image is split-screened. Tapping on the feed you want hides the other one. 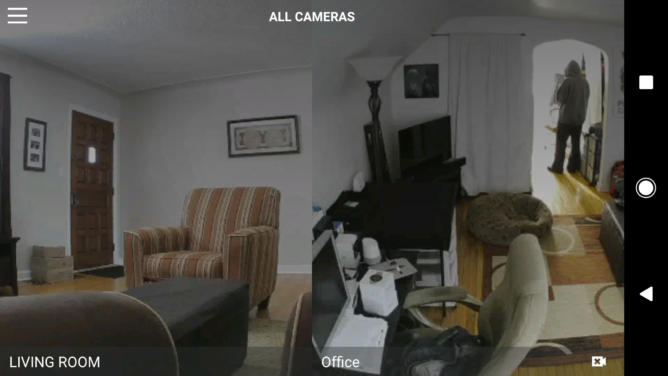 On the right edge is a timeline of all the events detected by the camera. Gray circles are small events, and blue ones are major (and those with people detected, if you have a premium subscription). This isn't clear at first, but the UI makes more sense once you figure that out. There's also an option at the bottom of the timeline for "Day Brief." This generates a high-speed compilation of all the events detected by the camera that day. I love this feature, and it's even better with a premium account as you can create custom briefs.

I appreciate the granularity of the Circle's notifications and how easy they are to set up. The "Smart Alerts" feature lets you set away status based on your location, limit how often you'll get camera notifications, and exclude the smaller gray bubble events. There's also support for alert zones in the video frame, but that's not free. Private mode, another new feature, lets you set a camera not to record any footage, but you can still pull up its feed live. This is another thoughtful feature.

Like all these home security cameras, Logitech sells a premium subscription service. It recently expanded the subscription options too. Now there's a $4 monthly plan for 14 days of storage, and a $10 monthly premium plan for 31 days of storage (and some other stuff I'll get to momentarily). Without a subscription, your video is available for 24 hours only. It seems like a shame to upload all those gigabytes in this age of capped bandwidth only to have it deleted immediately. But really Logitech, you don't need to bug me about upgrading constantly in the app. The banner at the bottom keeps popping up daily. You can dismiss it, but still.

Logitech Circle supports notifications for movement, but it doesn't let you specify certain parts of the frame (alert zones) unless you have a premium subscription. That's something you can do with FLIR FX free, but Nest also has it and requires a subscription. A premium level subscription also adds person detection. Bubbles with people in the frame will be marked as such so you can scan through them more easily.

The Logitech Circle was good when it came out, but I think this is one of those rare products that has gotten much better with updates. The app has been improved, the resolution has been boosted, and the notifications are more powerful. The compelling price is what makes this one of the best choices for indoor home security cameras. Each one is $150, and sometimes much less on sale. The Nest Cam and Canary Flex are both $200, and the Piper NV is $250. 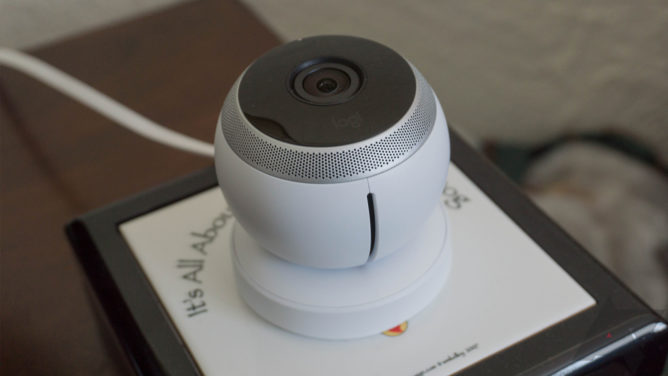 I always tell people to avoid buying technology with the expectation of marked improvements via updates, but it worked out this time. Circle early adopters are probably pleased. As long as you don't need outdoor cameras, the Logitech Circle should be at the top of your list when looking to keep an eye on your humble abode. You can get them from Amazon, Logitech, and other retailers.