We're barely into the new year and Google isn't wasting any time getting updates out to some of its apps. A new beta for the Google app turned up on Tuesday, but like the last few versions, there aren't any apparent new features jumping off the screen. However, there are a few clues hidden inside the apk that tell us about a few changes coming down the pipe in the future. On the docket this time is a new(-ish) input method for Google assistant and a mysterious gesture-based search action. The first steps have also been taken to bring Google assistant to Android Wear. As usual, we've got a download link at the bottom of the post if you'd like to try out the latest version ahead of schedule.

Google assistant for the less chatty

There's no denying that Google assistant has some substantial advantages over the older Google Now voice interface, but a few features were lost in the transition, at least for now. Most people will point to curiously absent functions and services that are only available in Google Now – like package tracking – but there was also one fairly big usability issue introduced in Google assistant: You had to interact with it through voice. 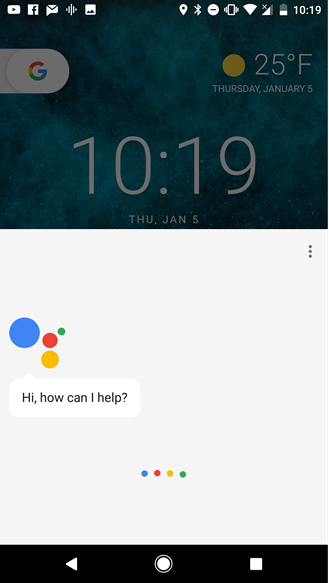 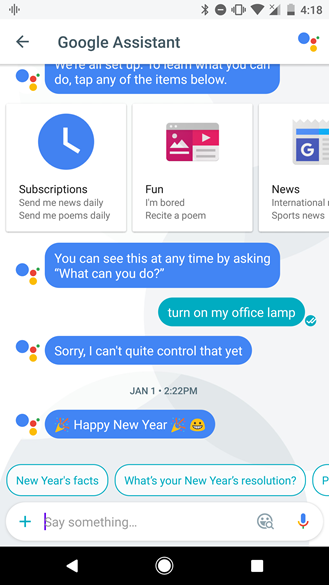 Of course, Allo's version of the assistant already supports typed communications. It's only the core version that appears on Pixel phones (and others with some modifications) that can only take commands through a voice prompt.

This limitation may not be around much longer. The latest update to the Google app includes a change to a layout used in the Google assistant popup to add a button with a keyboard icon and a box for text entry. The text box also includes "Type something..." as a hint to users. From the look of it, only the keyboard icon will be visible at first. Tapping on it will reveal the box and display the keyboard to begin typing.

This isn't necessarily a huge change and may not even be relevant to many of us, but it certainly could be useful in either loud environments like a concert where voice commands are going to be drowned out or in very quiet settings like a movie theater where it would be inappropriate to say something to your phone.

The first clue about Google assistant on Android Wear appeared with the third developer preview back in September, and it has since been officially confirmed in an interview with Jeff Chang. With that in mind, there's not a lot of new information to be gleaned from this teardown, but a few small pieces have been added to begin work on what will be the settings screen for Google assistant working through Android Wear.

There are just a couple lines of text and a definition for the settings screen, but these are barely more than a placeholder at this point. Nevertheless, this does show enough to see that users will be able to choose the language they use with their Wear device, which may mean it will be possible to select one language for a phone and a different one for a watch.

At this time, there's still not enough here to determine which restrictions will apply to Google assistant – i.e. will it be available on any watch paired with a Pixel, will it only work with select watches regardless of which phone they are paired with, or will it possibly require a very restrictive combination where both the phone and watch must come from Google? Ideally, every Wear 2.0 watch will have assistant regardless of the paired phone, but that seems a bit too optimistic given the emphasis Google placed on the Pixel exclusivity. We probably won't have to wait too much longer for an answer to this question since Google's watches are expected to be launching fairly soon, along with a stronger than expected lineup from various manufacturers.

Now we get to the mystery item of this update: something called Search gestures. From the name and descriptions in the text, it's easy to surmise that this feature involves performing some kind of search with a swipe down on the home screen. Details get pretty murky after that.

Users will be able to choose a default type of search, including options for In Apps and All. Strangely, these are internally referred to as summons (for In Apps) and web (for All). On the surface, these options sound a bit like the various forms of deep search for apps Google has been implementing over the last couple of years.

Search gestures could be as simple as a swipe to open the search bar without reaching up to tap on it, which makes some sense for tablets and phones with large screens. Since this feature is directly tied to a gesture on the home screen, it's a safe bet that it will only operate within the Google Now Launcher and/or the Pixel Launcher.

The terms "summons" and "corpus" are particularly interesting to me. They are uncommon enough that they seem deliberately chosen for their specific meanings, but neither really makes sense with the available clues. Naturally, we'll keep watching for more.

Update: Kevin Barry (developer of Nova Launcher) points out that Google's open source launcher3 project includes a flag called PULLDOWN_SEARCH that looks very similar to the strings above. When enabled, a downward swipe across the home screen simply opens up the search interface as if a user had tapped the search bar. Given that there are new settings and distinctions between the target of the search, it's likely that this is an evolution of that original feature. It's still possible this is something different, but this certainly adds weight to the likelihood that this is just a shortcut to search. Thanks, Kevin!