After a lot of huffing and puffing about consumer safety, it seems Verizon has now decided it will brick your Galaxy Note7 after all. Just not until January 5th. Originally, Verizon had rebuffed a statement issued by Samsung saying it would begin sending out an OTA to prevent Galaxy Note7s from charging on December 19th. It turns out, at least apparently, Verizon was most miffed by the date, not the actual prospect of disabling customer devices. The language in their original statement specifically referenced the timing: "We will not push a software upgrade that will eliminate the ability for the Note7 to work as a mobile device in the heart of the holiday travel season."

But this reading seems like a bit of copout. Verizon's original statement very much sounds like it disapproved of the update at any time, let alone during the holiday season. Not that it was just waiting for a better time to send it. However, the statement also doesn't explicitly say Verizon would never issue the update, so, it's just kind of unclear.

Anyway, if you go to Verizon's FAQ for the Note7 recall, there's a new section there - "Is Verizon Wireless disabling my Note7?" and the answer boils down to "yes - on January 5th."

Verizon probably could have avoided a lot of negative attention by articulating that it would issue the update at a later point initially, but I guess hindsight is 20/20.

Today's the day for Note7 devices on Verizon to get the software update that completely prohibits the device from charging. It's version MMB29M.N930VVRS3APL2. 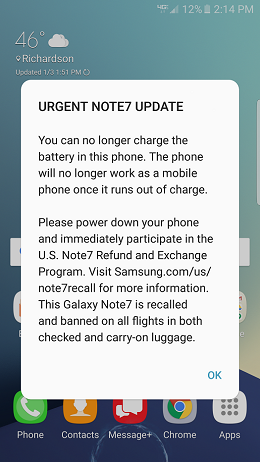